To Catch a Big Halibut, or Ling Cod

When it comes to delicacies for halibut, or ling cod, one of their favourite niblets is the oily belly skin of a salmon. The best way to get this bait is to catch them and darn it all, that means we’ve got to go catch a salmon or two! I hear you, it’s a tough gig, but the fresher the belly meat the better the results. So we head out, drop down a flasher with a hootchie trailing and nail a few salmon (Coho, Chinooks, Pink, it really doesn’t matter). Fillet them up keeping the prized belly meat for a trip to ground fish heaven. Now with fresh salmon fillets in the freezer and a bag full of belly meat at our side we’re set for some great halibut fishing. 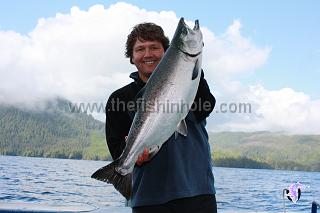 To give myself a fighting chance at landing a big halibut, I run stiff halibut rods with 100 lb Tough Line tied to a spreader bar. On the business end I attach the biggest circle hook I can get hold of and hook a strip of the belly meat 8 to 10 inches long. Belly meat is oily and like candy to halibut and ling cod. It’s also really tough so just hook it once near the top of the strip so the rest of it strings out behind like a kite. This is a simple system and the fact that the bait is really tough allows it to withstand the pecks of pesky red snapper while continuing to release that alluring oily scent to the bigger things that will hopefully go bump on my line. 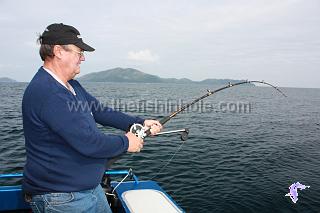 As for location, good fishing is consistently found at the very edge of the continental shelf. This is where relatively shallow water near shore drops off into super deep trenches that can go to a thousand feet or more. We locate the top edge of this shelf using sonar and anchor up on the high side of it, typically in 250 – 320 feet of water. Then it’s a matter of dropping down the bait and waiting them out. Bites can come fast and suddenly. One second all is quiet, the next, three rods are ripped down as big halibut and ling cod make mince meat out of the salmon bellies. We’ve been hit so hard that sometimes we literally can’t pull the rod out of the holder for all the strain and pressure the fish are putting on it while line is smoking off the reel making things very exciting in a real hurry. Get a big bite and you’ll never forget the experience. 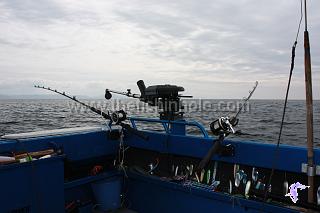 Over the past five years I’ve been fortunate enough to get more than my share of big bites. We’ve landed five flatties that pushed 100 pounds, plus a lot of 30 to 60 pounders. I was witness to the largest halibut fight I’ve ever seen when Melanie hooked and battled a giant, going toe to toe for nearly half an hour before the hook pulled free. To her credit she was right back in the seat and later landed a very respectable 100 pounder. 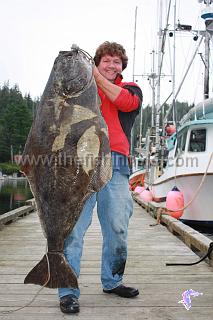 While I speak so highly of halibut, the ling cod fishery on the west coast is also totally amazing. If the edge of the shelf I’m fishing is on rocky structure this is the perfect spot to pick up ling cod. You will easily be able to feel this type of bottom when you drop a spreader bar or a big jig. The contact is really sharp and telegraphs up the rod immediately. Once on the bottom the hits will hopefully follow and when they do, be prepared as they will be extremely hard. In these waters lingcod are measured by a different standard. Twenty to 30 pound lings are common and we’ve caught them over twice that size. If you want some fun, grab a salmon rod, tie on an 8 or 10 ounce lead head jig tipped with salmon belly (no jig body), drop it to the bottom and slowly bounce it up and down. At some point the jig will simply not come up. That’s the time to hit ‘em as hard as you can and start reeling. It’s a lot of work, but also a lot of fun to land a big ling this way. 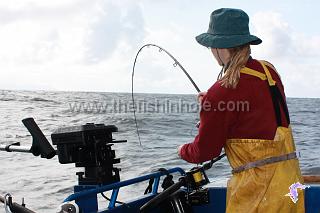 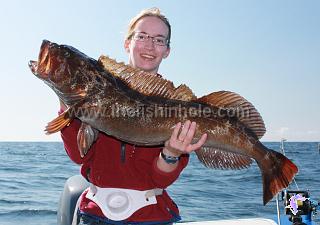 There is one downside to using this rig and that is that when a big halibut hits rather than a ling you’re toast. I mean literally toast. Twenty to 30 pound salmon gear is no match for a big barn door that wants to stay put and you know, that’s exactly what she’ll do. You can yank and prod from sunrise to sunset and you’ll get nowhere – that is if she doesn’t spool you out of mere annoyance. When this happens and you’ve spent a very long time without gaining any ground it’s best to wrap the mono around a big wood gaff handle and do a direct pull straight up. This will either snap the line which is usually the result or if you’re lucky move the fish. Continue this way until you either get the fish up or break off. Never wrap any line around a body part or you’ll risk severing it right off. Bottom fishing off the west coast is very exciting. The fish are big and the fishing is often fast and furious. 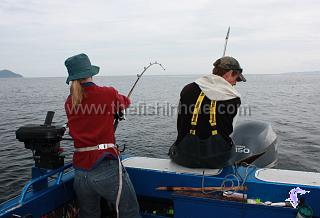 If you’re curious about where I go to get such good fishing, I’m happy to tell you. I’ve caught fish up and down the BC coast, but nowhere have my results have been as consistent as when I fish with Wayne Ridley of Wayne Ridley’s Fishing Charters out of Winter Harbour. The waters out front of Quatsino Sound team with halibut, ling cod, salmon and the like. It’s my fisherman’s paradise and the great thing is that you can drive right to it on northern Vancouver Island. It’s a place where salmon are plentiful, the ling cod are big, and the halibut can be huge.