Where the Trout Are The art of locating feeding trout in rivers and streams.

Many anglers, myself included on occasion, seem to always want to be fishing where they aren’t.

In large rivers many anglers want to get their lure or fly into the middle, after all it’s deep, fast and surely must house the biggest trout in the stream. In most cases this is not true; fish need certain things at specific times to survive. The dock you’re standing on or the knee deep water where you’re standing in the river can at times be a more likely place to find fish.

Trout in rivers and streams need several things to make them happy, shelter from predators, relief from the current and a food supply that requires as little exertion as possible. Sheltering lies are where trout find protection from both predators and the current. Feeding lies are areas where the trout will move into to feed. If a trout can find both of these in one spot it’s called a prime lie and this is generally where you will find the best fish in the area.

Let’s examine some typical areas in rivers and streams so that you can learn to identify likely spots to find trout.

Broken water, such as boulder gardens and riffles are good places for trout to live and will contain sheltering lies, feeding lies and prime lies. The broken water in these areas provides both protection from predators and the rocks and uneven bottom provide protection from the current. Trout must face into the current to survive but cannot work too hard so areas where there is a little gentler flow are needed. These areas contain numerous current seams which funnel food into what is called a feeding lane.

Areas like these are great places to catch fish because they mask the anglers approach. The broken water provides poor visibility and the noise can mask the approach which allows the angler to get much closer for an easier presentation. While most anglers recognize the areas behind rocks as likely fish holding water they overlook the area in front of the rock. The current pushing up against the front of the rock has a cushioning effect on the current and will often be home to a fish or two, don’t ignore the front of rocks. 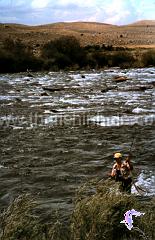 Undercut banks occur in streams that run through soil rather than rock. Spring creeks and meadow streams are likely locations for undercut banks. Some of these undercuts can be minor but many of them are surprisingly deep. Brown trout in particular like to hang out in these areas to wait for the darkness of an overcast sky or nightfall to begin their feeding.

Undercuts are for the most part sheltering lies. While some food may be available to the trout that inhabit them, most fish will move out from under them to feed, secure in the fact that they scoot back under at the first sign of danger. The one mistake many anglers make while fishing these types of streams is walking right along the bank as this means you are walking right on top of the fish. Doing this will spook fish and they in turn will spook any others in the area. On heavily fished streams with undercut banks you will see two paths along the stream, one close to the bank, the other well back travelled by anglers that understand undercuts.

Stay well back from the bank or better yet get right into the water and wade slowly. Present your fly as close to the undercut as possible. If you can swing a streamer under the bank you may be rewarded with savage strike, losing your fly on snags will occur but the reward may also be that trout of a lifetime. 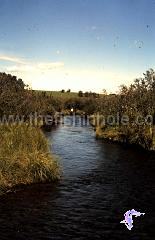 Converging currents are one of my favourite places to cast a fly, especially nymphs. When two or more currents come together in a river or stream they do a couple of things that are advantageous to trout. When currents collide they slow down and channel food into one concentrated area. This slowing of currents and concentration of food provides an excellent sheltering lie, as well as, feeding lie and in many situations a prime lie. An angler that works from the bottom of the current seam up into the pocket where the two currents meet will find success with a nymph. If the fish are rising to surface insects , use a dry fly. 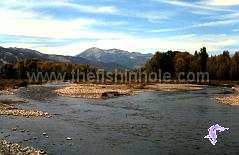 Pools are the slowest and deepest parts of a stream. Many anglers spend a great deal of their time fishing these spots while ignoring the water in between. Pools are definitely the most obvious places to find fish and can be the easiest but often fish that lie deep in pools are not feeding making them not so easy to catch. While these pools can provide outstanding fishing at times, often they are providing nothing more than shelter because of their depth.

Fish sitting in pools will most often spend their feeding time at either the head or tail waters. This is especially true when there is a hatch on. Fish that spend much of their time near the bottom, safe from predators and out of the current will move to where the current enters the pool, the head, or to where it exits the pool, the tail or tail-out. In these areas the food is concentrated into a feeding lane and the distance the fish has to travel to the surface is reduced. Trout must take in more calories than they expend while feeding. It takes a lot less energy to move to shallower water, where the food is concentrated to feed, than it does to rise up through several feet of water to take insects spread out over a larger area. Often the largest fish in the pools can be found feeding at the head of the pool as they get first crack at the insects that are being funnelled into the pool. This allows them to quickly retreat back into the depths at the first sign of danger. 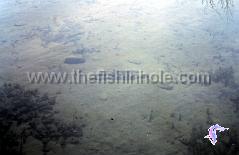 Overhead cover can take many forms: logjams, branches, willows, scum or foam, weed beds, bridge abutments and docks are but some of these areas. They provide not only cover and relief from heavy current but can also be a source of food. Terrestrial insects such as ants and beetles will often live in these areas and end up blown or washed into the water which provides an easy meal for the waiting trout. In streams, stoneflies will use these areas to crawl out of the stream during their emergence and use these areas to migrate out of the stream to begin their short lives as a flying insect.

Weed beds can be difficult to fish but should not over looked. They provide protection from predators, slow the current, house insects that provide food and also release oxygen during the day. They are best fished with dry flies as it is difficult to effectively fish nymphs or streamers in these areas. Dry flies can be fished along the edges of the weed beds or cast into the open pockets of water between weed growths. Fish hooked in these areas are often hard to land as they will dive for the safety of the weeds. Weed beds will often be home to scuds, or fresh water shrimp, which provide trout with an easy and nutritious meal. Stripping a scud pattern along the edges of these weed beds can often result in success for the angler. 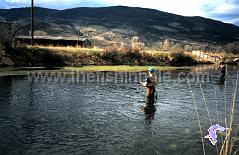 We have a mantra that we use, especially when floating rivers like the Bow, “FISH THE FOAM”, where there’s foam there’s food and where there’s food there’s fish. Foam lines are a place where food collects due to the current; they are a good indication of where the main current seam is. In the classic video “Anatomy of a Trout Stream” Rick Hafele demonstrates this by spreading out a bag of mini marshmallows out across a stream. After a short journey downstream the majority of the marshmallows have all fallen into a line, indicating where the current directs most of the food. This is especially useful in areas where rivers are broader and flowing slower than in other places. They indicate where the main current is in an area where on the surface everything looks the same. Foam lines can be fished with dries, nymphs or streamers as fish will line up along these lines knowing a meal is not far away. Hopefully these tips will help you understand better not only where trout live in streams, but where the fish that are actively feeding are most likely to be. Hopefully the next time you approach a stream or river you will be a little more confident that you are in the right place after all. 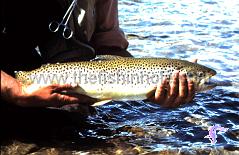