The Torrents of Spring

For many long months western anglers – especially the rod and reel kind – are held prisoner by the climate we live in. Sure there are some opportunities to cast a horizontal line during the deep freeze months. Tailwater below bottom-draw dams, reservoirs kept ice-free from thermal power stations, spring creeks and rivers warmed by mountain Chinook winds all afford a respite from angler hibernation. Still it’s an ordeal. Then suddenly the days lengthen, the Canada geese return and the torrents of spring are on us again – in more ways than one. It’s a time when anglers experience a fundamental change in attitude from famine to feast, scarcity to abundance, so many choices so little time. The Long May Weekend is generally recognized as the opening days of spring and summer angling. Although there a myriad of openings and closures as fisheries become more and more micro-managed to maximize angling potential and conserve fish populations. Even though chances are good that a trip to the foothills at this time of year will result in snow on the camper roof, the first extended trip of the year is often the best. Mainly because angling in spring has so much to offer. Here are some rewarding options for anglers, and especially flyrodders, to choose from. 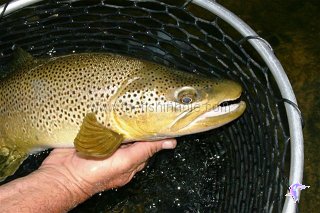 The prairie pothole concept of trout management was honed in Alberta but has since spread to other western provinces – most notably the Narrow Hills complex of north central Saskatchewan and the Parkland Region of Manitoba. Here rainbow trout and other salmonid species stocked in previously-fishless, nutrient-rich waters exhibit tremendous growth rates and fighting ability. In Alberta two classifications have developed. The first is the five-fish-no-size-limit pothole attractive to the entry-level anglers. Unfortunately when subjected to fishing pressure, the number of hold-over trout in these waters is quickly diminished and catch sizes plummet. A new class of trout fishery is emerging in the province largely from angler pressure called a Quality Trout Fishery. Here the harvest is “delayed” until the trout reach 50 cm. – allowing anglers to catch and release consistently larger fish than on the standard catch-and-keep ponds. QTF’s like Bullshead, Beaver, Ironside, Muir and Police Outpost are already gaining international recognition. One of the great early season events on Alberta’s lower altitude trout ponds is the water boatman fall. Activity by these little bugs that propel themselves through the water with oar-like legs cranks up the trout action shortly after ice out. And can turn a glorious spring day into an action-filled afternoon when the hungry rainbows hammer boatman imitations. I had one such memorable day on Hasse Lake west of Edmonton one fine May afternoon when the trout were stacked against the eastern shore pounding the little bugs. The action was non-stop until I broke off my last boatman imitation in a large trout and returned to the boat launch with a big smile on my face. Sadly Hasse, like several other Alberta trout lakes, has since been withdrawn from the stocking list after invasive yellow perch and pike were illegally introduced. Other effective spring patterns are chironomids, damsels and scuds which all become effective after the lakes “turn-over”. A natural seasonal phenomenon on ice-covered prairie stillwaters where the water column reverses itself from warm on the bottom and cold on top to warm on top and colder the deeper it gets. Alberta stocked trout lakes generally have no closed seasons but the quality lakes have winter closures with various opening dates and bait bans. So always check the regs closely. Non-QTFs where large trout are still abundant are Dolberg, Swan, Lees and East Pit. 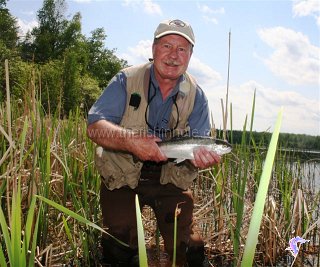 Alberta’s Long May Weekend rule is clearly most applicable to the warm water species whose spring spawning runs are protected by the April 1 to May 21 closure – a comprehensive strategy brought in a few years back by Sustainable Resource Development biologists to conserve pike and walleye populations and restrict harvest to three-spawn fish. While the opening of pike season occurs a couple weeks earlier on many southern prairie parkland lakes and reservoirs – or has recently been scrapped entirely on several smaller water bodies – early season pike action on a flyrod can be described in one word. Great! Cool water temperatures keep the big predators close to the surface or in shallow bays on the prowl for bait fish. Casting a large streamer fly on a sinking line, then bringing it back with a quick jerk-jerk-pause retrieve can trigger savage strikes and epic battles. On a rare calm day the action can be enhanced with a floating line and a surface lure made from spun deer hair. Witnessing a big pike surge up behind a Popper or Dahlberg Diver-style surface fly and mug it is truly a heart-stopping event. I’ve found that the effective fly colours are basically the same as spin-cast lures designed for pike. Red and white, yellow and red, and green and black being the most popular. While bunny strip flies have a wonderful action in the water, trying to punch a six inch-long piece of water-soaked rabbit skin into a stiff spring breeze is similar to casting a wet dish rag. Flies tied with artificial hair that absorbs little water will quickly turn your day from frustration to fun. Two other vital pieces of equipment to store in your vest are a pair of jaw spreaders and needle-nosed pliers or other hook extractor. Not only do they make releases easier for the fish it sure cuts down the wear and tear on your flesh. It goes without saying that a pike leader set up should always include a shock tippet of coated wire. Either that or be prepared to have an empty fly box at the end of the day. Pike tend to be sedentary fish, preferring to lie in wait for their prey so it’s best to take the action to the fish.Casting in a fan-like pattern while cruising a back bay or along a weed line can be an effective way of covering the water for spring pike action. 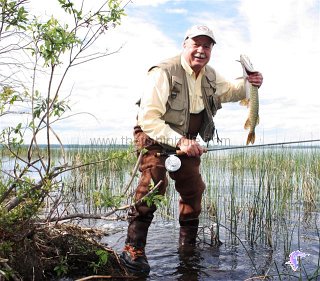 When it comes to Alberta trout streams the torrents of spring are just that. A time when many mountain born rivers become raging sluices of snow melt and remain blown out for several weeks. But not all rivers and a torrent of another kind occurs in spring which makes for some pretty exciting angling. The window of opportunity between ice out and when the mountain run-off hits creates an exciting window of opportunity for trout and Arctic grayling anglers thanks to a proliferation of early season insect hatches that turn on the fish in lower altitude rivers and creeks. One interesting insect to key on is the March Brown mayfly – even though it hatches in mid to late May in Alberta. The March Brown hatches on the Red Deer River tailwater below the Dickson dam and other central Alberta brown trout creeks are prolific and rewarding. I recall one fine May day casting to super-sized browns with RDR guide Garry Pierce. The fish were stacked in the feeding lanes gulping emerging March Browns. The fishing was tough and technical with the trout continually changing position but paid off handsomely with a 26-inch bruiser. It took me into the backing twice before submitting to Garry’s net. Blue-winged Olive mayflies and Skwala stoneflies are also important hatches which can turn spring angling choices into a torrent. And when they are over, the Green and Brown Drakes, Golden Stoneflies and Salmon Flies are on deck. Sometimes it’s hard to keep up.