With the ice gone and the water starting to warm we wanted to get our first open water fishing trip in as soon as possible. With that in mind and anxious anticipation, Trevor and I made plans to head north from Edmonton to fish Swan and Dollar lakes. The forecast said wind and lots of it, but considering we’d spent an awful long winter slugging it out with deep snow, cold, and lots of ice we were prepared to accept some waves and wind. As with any weekend fishing trip, there are bound to be challenges. On this particular weekend we definitely had our share and here’s a rundown of what we faced on this so called typical trout fishing weekend. 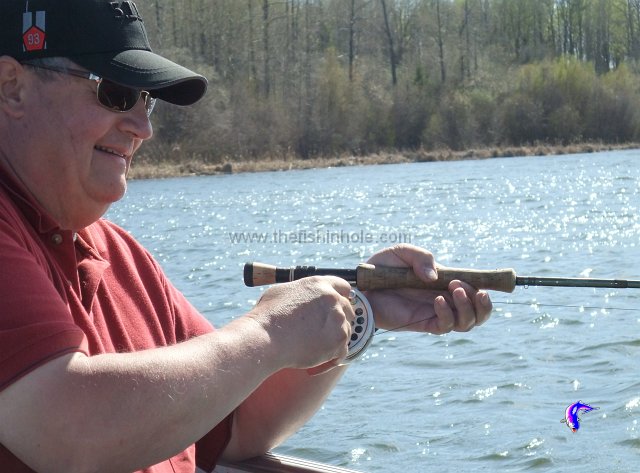 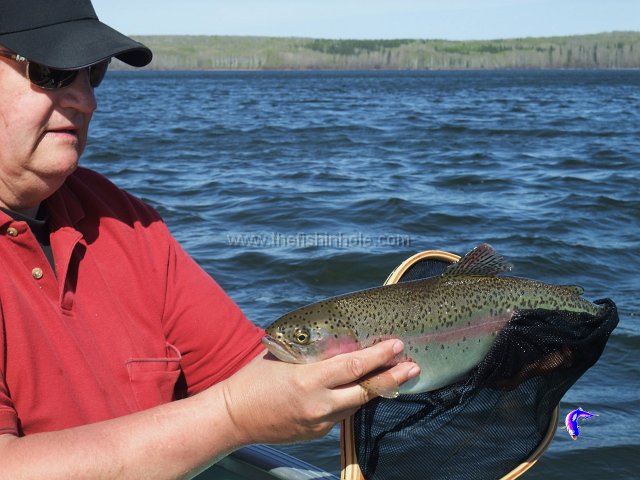 Our trip started at Swan Lake, which is along with Dollar is not only stocked with rainbows but aerated as well which likely means little or no winterkill. The harsh winter and extreme snow cover reduced the light penetration in many of Alberta’s non aerated pothole lakes dropping oxygen levels to the point where they succumbed to winterkill. If you’re considering going to a lake for trout, the aerated ones or larger water bodies are definitely your best bets. The local Fish and Wildlife Office would get you up to speed as to which lakes to try and which ones to avoid.

When we got on Swan the first thing we wanted to do was cover water and get to the far shore. So we trolled our way over. Trevor ran a fast sink line with a bead head woolly bugger, while I ran an intermediate line with a double shrimp. Within a couple minutes Trevor’s rod tip dove to the water and a rainbow leapt skyward. A few minutes later we had him at the boat. It was a beautiful trout, about 2 pounds and bright silver. We got started again and I got a hit, it was a twin to the one Trevor had just caught. On the trip to the far shore we caught several trout, all about the same size. They were pretty well evenly split between the two of us which indicated the fish were situated all over the water column. 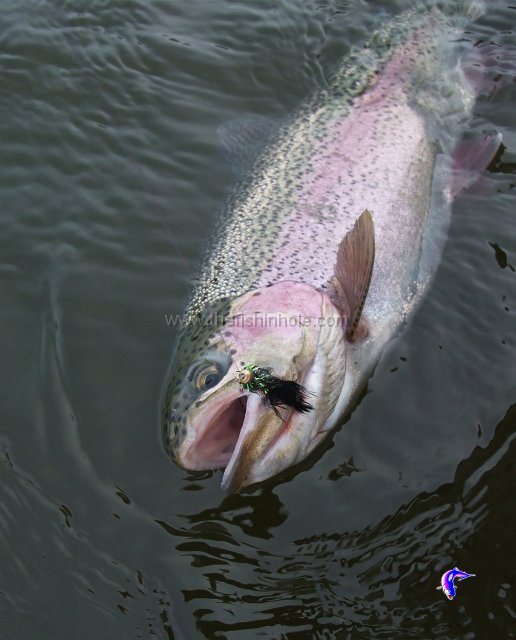 When we got to the far shore we continued trolling, but, as the lines worked shallower into the 6 foot range, we got a larger fish, probably 3 and a half pounds. It seemed the bigger ones were shallower, which is often the case early in the year. Given that this was the calm side of the lake, we decided to try strike indicators and bead head flies. I tied on a San Juan worm imitation and Trevor went with a smaller bead head nymph. Every few minutes we’d get a hit and the trout were on average, larger, with our best rainbow running around 4 pounds. This worked well as long as it wasn’t too wavy, which limited us to the one shore.

Looking for a change of pace, I recalled having done well in the past on a shallow flat. It was only 2 – 3 feet deep, but under the cover of the waves and some cloud, perhaps the fish would be there feeding. We made the trip to the shallow part of the bay. It was quite choppy, being fully exposed to the wind, but the fish were there in droves. There was sparse weed growth this early in the season so I pulled out my little black and silver jig, pitched it into the waves and started trolling. We didn’t make it 10 feet before my rod doubled over and a large rainbow went crazy jumping over and over. I held tight and kept steady pressure. Soon the battle evolved into a tug of war, and a few minutes later I scooped her up. She filled the net and easily went 6 pounds. Over the next 20 to 30 minutes it never took more than a minute between hook ups and all the trout were big. Eventually the heavy weather played us out so we made our way back to the protected side of the lake.

We tried trolling again, and this time Trevor was outdoing me. His fast sink line was getting much deeper than my intermediate and with the sun now out and shining brightly it was obviously making a difference. I changed to my biggest bead head woolly bugger in an attempt to gain some depth and it definitely helped, however, Trevor was still doing better. With too many fish to count, we called it a day before the sun set and made plans to hit Dollar. 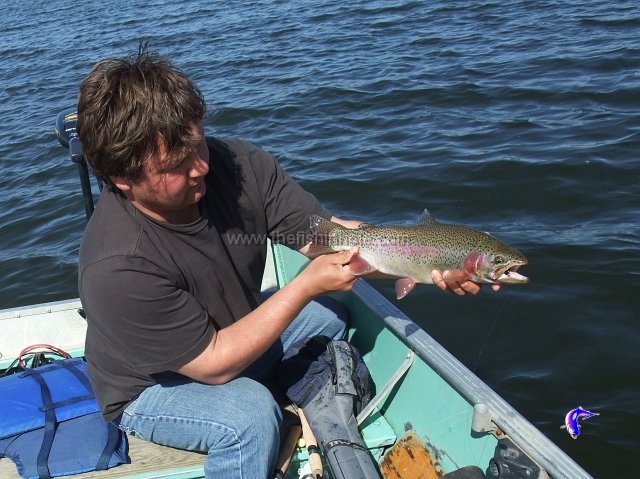 If we thought the wind was bad the day before on Swan, which it was, at Dollar it was ridiculous. Boat control was impossible. All day long we had the anchor out and it only served to slow our drift while the boat swayed side to side, back and forth. There are browns in Dollar and I wanted to catch some. Pitching flies at 3 or 4 feet under a strike indicator and slowly reeling them back over the shallow weeds caught us a few fish, including one brown. I then decided to try a plug and tossed out a #5 floating Rainbow Rapala into the waves. I slowly twitched it over the shallows along the edges of the first drop off and was rewarded with lots of hits, most of which were rainbows. For a change of pace we snuck over to the protected side of the lake, got out of the bulk of the wind, and worked the chironomid strike indicator set up catching several more. 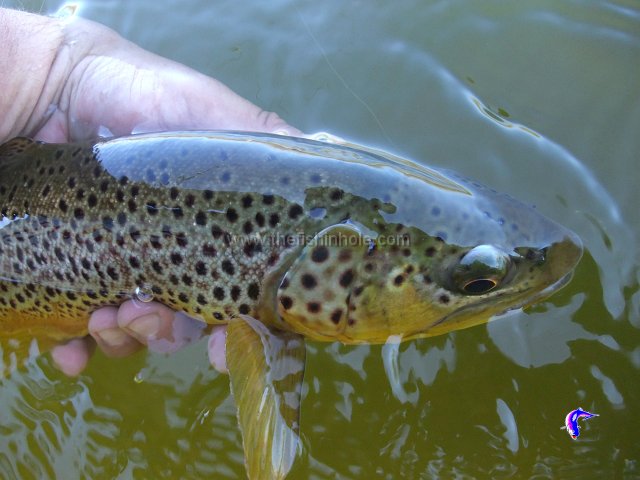 Then I switched back to the jig. This time I tossed it out to the deep side of the lake and slowly dragged it up the slope. This worked extremely well and I was soon into all kinds of fish. Even if the jig got caught deep in some weeds, I’d just reel down until the line was tight, and then snap the jig through. It seemed this disturbance drew the attention and when the jig popped out the other side they were there to hammer it. The jig dragged over the deeper water accounted for a lot of fish including a couple of browns. Given that the sun, and especially the wind, had not let up; we decided to call it an early day. The fishing had been great! 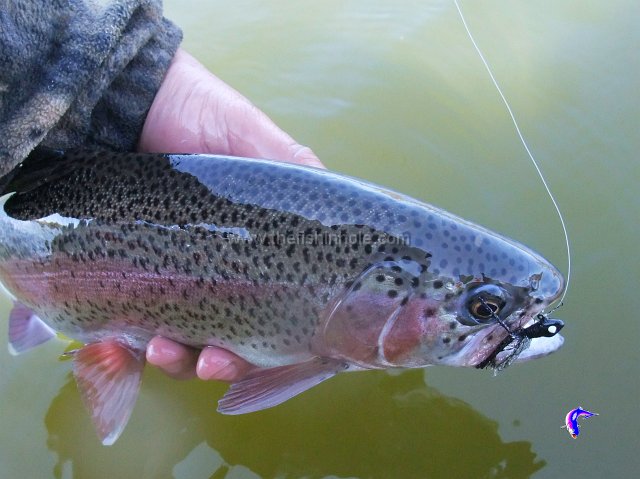 Over our weekend at Swan and Dollar we caught too many fish to count and it was pulling out different presentations that helped us stay on biting fish. If one area slowed we’d move to another spot and get right back into the action.