Western Canadians tend to think of walleye, perch and northern pike when it comes to warm water angling opportunities, and naturally so considering their broad distribution.But for those seeking a new and exciting fishing opportunity, smallmouth bass should not be overlooked. Their original range in Canada was confined to the St, Lawrence River and Great Lakes drainage systems, but they have been translocated often, and successfully, to many parts of the west. Those who’ve fished for them have come to understand the excitement and challenge they readily provide; those who haven’t are missing out on some of the most enjoyable angling available. 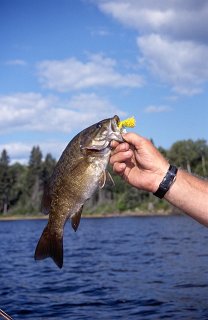 Smallmouth bass, or “smallies” as they’re often called, are members of the sunfish family, characterized by an overall pan shape, a deep, compressed body, and sporting both a spiny and a soft dorsal fin ray. Their colouration varies highly in reaction to the habitat they occupy, and even within the same lake there can be significant differentiation. Generally speaking they sport a greenish/bronze hue, often marked by darker blobs or bars. Smallmouth thrive in waters that provide them ample opportunity to hide from predators. They’re most often found among or around rocky reefs, boulders and submerged logs. They tend not to travel far within lakes they inhabit, and are generally inactive in the winter months, feeding minimally. Through spring, summer and fall, however, they are aggressive feeders, preying on insects, small fish and, where found, crayfish, which are their preferred food and can account for >60% of their diet in some watersheds. The male smallmouth builds a nest any time from late May through to early July, though egg-laying doesn’t occur until water temperatures have warmed to 15C. This temperature requirement is the reason that smallies aren’t found at more northern latitudes. 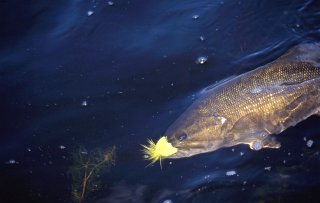 Dedicated smallmouth anglers will attest to their fighting ability; they are reliably scrappy and will often jump several times in an effort to shake the hook. This visual aspect of the fight is one of the attributes that make bass such a fun fish to catch. A variety of angling techniques can be effective, and whether you’re a spin fisherman or a fly-angler, smallmouth offer an appealing challenge.

Depending upon regulatory restrictions, live or frozen baits are a preferred option for many, with worms, minnows, leeches, crayfish and frogs the most popular choices. Jigging these baits over boulder fields, sunken reefs and submerged timber has proven effective at nearly every bass lake. Artificials, like twister tails and other soft-bodies baits, are another popular and successful choice, especially those sweetened with scent. 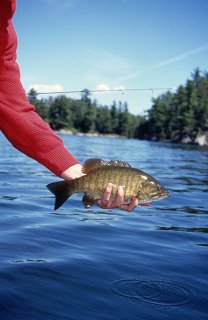 Early in the season smallies can be found in relatively shallow water, most often less than 20-feet deep and regularly in water six- to eight-feet deep or less. At this time of year top-water crankbaits are an exciting option. My first bass, caught when I was 10 years-old, slammed a frog-coloured Jitterbug on the surface, and this lure and other similar crankbaitsand buzz baits remain popular with those who love to fish bass on top. Hooked on light rods and line, a 15” bass offers a more exciting battle than most species twice their size; it’s a fair statement to say that bass are known for fighting “above their weight”. When fishing in heavier cover, medium-action rods throwing spinner baits are a good bet. 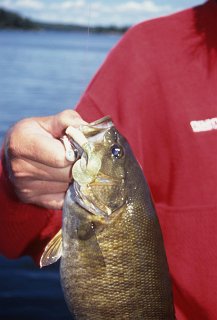 As the summer progresses and the water warms, smallmouth bass fishing only improves. Having said that, however, they’ll move to deeper water at this time, often down to 30-feet or more, and fishermen have little choice but to throw jigs, bait rigs and similar weighted lures to get down to them.

Of all our warm water fish, bass are probably the best suited to flyfishing. When they’re shallow, popper flies, hair mice and other large, gurgling floating flies are sure to turn them on. Depending upon wind conditions, 6- to 8-weight rods and floating lines are ideal. As bass move deeper, sink-tip lines are the answer, with large streamer flies that imitate leeches, crayfish or minnows excellent choices. If you don’t have a sink-tip line, you can still reach them with long leaders and weighted flies such as Clouser minnows. In my experience, naturally-coloured flies out-produce those more brightly-coloured but, as always, don’t be shy about experimenting. 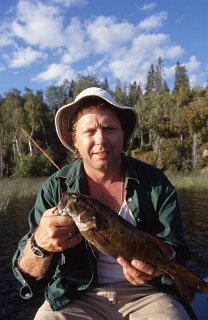 While they do offer surprising good table fair, as do most in the sunfish family, smallmouth are ideal fish for those who practice catch and release. Most often they come up lip-hooked, and you can handle them easily by tightly grasping their lower lip and jaw, although with large bass you should support their body when handling them to prevent unwanted damage. Lipping them makes removing hooks a simple affair, and handling bass in this manner generally comes without the inherent dangers of sharp teeth and flesh-piercing dorsal fins that can make releasing pike and walleye an adventure at times. 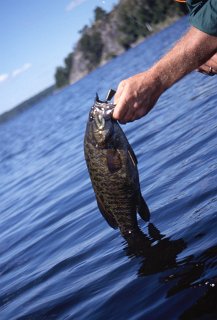 Wherever you’re fishing smallmouth bass, fish over 15” (38 cm) in length are thought of as decent-sized, with smallies over 18” (46 cm) considered trophies. After 15” they tend to gain girth as much as they do length, so an 18-incher is a pretty chunky fish. Smallmouths are a relatively slow growing fish, and an 18-inch bass is likely to be 12 years-old or greater; for that reason alone it is recommended that all large fish be released. Though they can be territorial during the spawning season, bass tend to be found somewhat congregated; where you find one the chances are there are others in the immediate vicinity. In fact, it’s not unusual to see several bass chasing your lure as you pull it through the gin-clear waters they often inhabit. 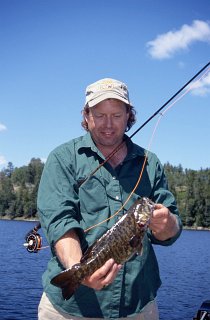 Smallmouth bass fishing is limited for those who fish primarily in B.C., Alberta and Saskatchewan, with the very best opportunities available in eastern Manitoba and northwestern Ontario. Whiteshell Provincial Park, Nopiming Provincial Park, the Winnipeg River, Lake of the Woods and the many lakes and rivers within and around these regions are renowned for their bass fishing opportunities. There is no shortage of campgrounds, cabins for rent or motels around the area, and you owe to yourself to at least once go see what all the bass “fuss” is about. If you’re like me, one taste won’t be near enough. 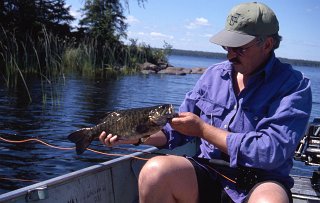