The tip of the Shimano Clarus twitched ever so slightly. From where it rested in the jet boat's rod holder it could easily be just a reflection of the pulse of the North Saskatchewan River's demanding current - brown and swollen with mountain run-off and the inevitable June Alberta rains. But to river guide Shane Hansen's experienced eye, it was something else. "That's a sturgeon," the 15-year veteran of the big river hissed. Which is where the fun began.

As subtly as possible I removed the cork handle of the powerful - yet sensitive rod - from the holder, cranked the reel a rotation or two to pick up the slack on the 30 lb.-test braided line, then waited for the mysterious fish somewhere out there in the turbid eddy to make the next move. When I felt the sturgeon mouth the big gob of night crawlers Shane had threaded on the circle hook I sucked in a gulp of air, then gave the rod a quick skyward jerk and the battle was on. The fight of a North Saskatchewan lake sturgeon - rather than the savage slash of a big pike or the tail dancing antics of a rainbow trout - is a solid, sinister surge, reflecting not only the prehistoric nature of the beast but also its amazing size. When my fish felt the hook it took off, peeling line from the reel and making the drag scream in agony. I was feeling a little uneasy myself, about what I'd gotten into. Shane for a moment feared we may have to pull the anchor, fire up the jet and follow the big but as-yet-unseen fish if it hit the main current. Luckily I was able to put on enough side pressure to turn the sturgeon's head and after that the tussle became a war of attrition. A few more runs, a few nervous moments when the fish ran under the boat or tried to bury it's snout in the mud bank we were tied up to and the dinosaur-era creature lay gasping in the live well. Measuring 131 cm. from the tip of its barbelled nose to the end of its sickle-like tail. Needless to say as a committed trout angler I don't catch them that big every day in Alberta where the largest known specimen was a 165 cm. brute. 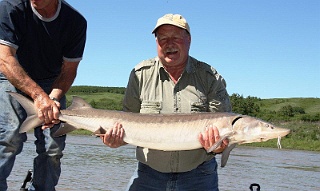 By the time we trailered Hanson's custom-built river runner up the Heinsburg launch at the end of the day we had brought nine North Saskatchewan Sturgeon to the boat despite constantly having to clear the build-up of poplar fuzz from the gear which kept the lines out of the water for a spell. An interesting day indeed for a fish that Alberta Environment and Sustainable Resource recently listed as a species at risk and may result in drastically reduced angling opportunities once the recovery plan is implemented. An electronic and floy tagging program is already underway. Although the number of sturgeon (only two were tagged) we encountered in a relatively short stretch of river clearly raises questions about the government's population modeling.

The lake sturgeon's Alberta range is confined to the North and South Saskatchewan River systems. In the south this includes the lower reaches of the Bow, Red Deer and Oldman rivers. In the north its home territory stretches all the way from below Drayton Valley to the Saskatchewan border. It is a denizen of the slow and deep. On our mid-June outing we found the fish in eddies off fast moving water where a current break deflected the main flow and created a pocket of calm where the big bottom dwellers could feed. But as Hansen pointed out, the sturgeon is also a highly mobile fish. A South Saskatchewan sturgeon equipped with an electronic monitoring device ranged all the way from the waters of the Gardiner Dam to the forks where the Bow and Red Deer Rivers meet. They are also sensitive to water levels. An eddy that was full of fish one day can come up blank a few days later if the river drops or rises requiring a lot of moving around with the jet boat to locate fish. On the day I fished with Shane's North Saskatchewan River Guide Company out of Heinsburg, the four backwaters we sampled all produced Sturgeon - plus super-sized suckers, goldeye and walleye.

Rigging for sturgeon is a game of compromises. Large, powerful reels and a rod with plenty of backbone must be balanced with a sensitive tip and terminal tackle that allows the angler to feel the almost imperceptible take of the sturgeon - where the bait is gently sucked off the bottom with the sturgeon's vacuum-cleaner-like mouth. The bait must also be anchored to the river bottom with a sizeable piece of lead, heavy enough to defy the big river's strong current yet with the sensitivity to allow the sturgeon's bite to be transmitted up the line to the rod tip. The way to achieve this without losing the necessary sense of feel is to use aslip sinker rig and braided line with minimal stretch. Plus keeping a constant eye on the rod tip after the bait is placed. It's amazing how many times a rod that has been inactive for a spell, when reeled up, will reveal a hook stripped of its night crawler package by a marauding sturgeon with a light touch. 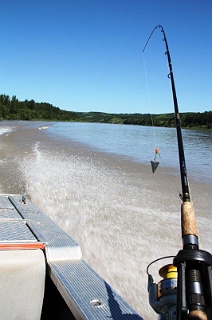 Mobility on the river is also an asset. While bank fishing can be productive if there happens to be any present on the eddy the angler sets up on - being about to cruise the river increases the chance of encountering resident fish and allows the angler to specifically target sturgeon. It also requires extreme caution when on the lower North Saskatchewan. Despite the high water we encountered the turbid flow hid numerous rock shoals and rapids. There were a considerable amount of dead-heads and timber floating on the flood waters to add to the boaters woes. Propeller powered craft are definitely not the way to go. The river in the Elk Point/Heinsburg area also has few access points and appears as pristine and unspoiled as it was when David Thompson and Peter Fidler used it as their main fur trade highway. 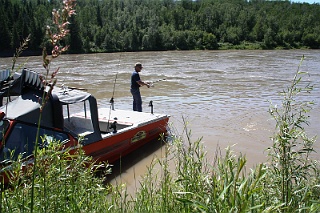 One note of caution, while the sturgeon's mouth is toothless and absolutely harmless its body is anything but harmless. Along both flanks and down its back the sturgeon is protected from enemies with rows of razor-sharp plates which can rip your hands raw. So if you must handle it, handle with extreme care. Because of its listing under the federal and provincial legislation as a species at risk, angling for sturgeon in Alberta is strictly catch and release. Just a quick pic and back it goes.