For some anglers fall is a sad time of year. The days get shorter and cooler and the signs that winter is just around the corner are everywhere. For many though, fall is their favourite season. The crowds thin as the kids go back to school, some outdoorsmen trade their rods for bows and guns, and others rush to knock a few items off the honey-dew list before the snow flies. In southern Alberta the "random" campers start to relinquish their spots along the forestry trunk road and the pressure on the cutthroat stream diminishes. It's a time of shorter, cooler days and wonderfully coloured trees, in other words a great time to be fly fishing. 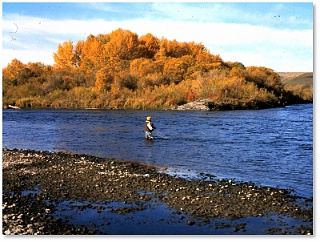 Signs that winter is just around the corner are everywhere

In Alberta the East slope trout streams are open until the end of October and if the weather cooperates I will fish right up until closing day. Once fall arrives on most trout streams two things conspire against the angler, low clear water conditions and fish that have seen thousands of flies, real and artificial go over their heads over the course of the season. This combination makes for some pretty finicky fish that require longer leaders, smaller flies and precise presentations. To the anglers advantage it is also a time when the hatches get sparser and easier to match. During the summer season numerous different insects can be on the water, making it harder to figure out exactly which one the fish are feeding on. In fall the fly selection is easier. The fish are fattening up for the long winter ahead and are more willing to take whatever is offered, not as willing to pass up the anglers offering. 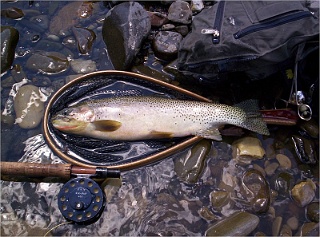 The fish are fattening up for the long winter ahead

The Tricos, that were so important in August, will start to wane, but still catch the occasional fish. The major hatch in southern Alberta at this time of year is the second coming of the Blue Winged Olives. These insects first hatch in the spring, but because they are a multi- brooded insect they have a second emergence in the fall. It is a very important hatch in both spring and fall so be prepared with some BWO imitation in sizes 16 & 18. The fall hatch is usually smaller than spring so I lean towards the smaller size. It is also the time that terrestrials play an important part of successful angling. Even though the hopper population starts to diminish as the first frosts arrive, the trout are used to feeding on them and will happily munch on this big easy meal before the long winter ahead. Ants and beetles are also very important at this time of the year as they are always present along trout streams and imitations work well as the mayfly and caddisfly hatches end. One method that I have had success with over the years is a variation of the hopper dropper rig which is a small nymph fished under a larger buoyant pattern. What I do in the fall is fish a sunken ant pattern underneath another terrestrial such as a foam ant or beetle pattern. Fish are used to seeing ants and beetles both on the surface and below and will usually come to one or the other artificial presented in this manner. They say that ants have a slightly acidic taste that the fish like. I, personally, have never tried one but I do know that trout love them. I always use fluorocarbon tippet  material to connect my sunken fly to my dry. The low visibility of the fluorocarbon combined with its tendency to sink better than monofilament  makes it the right choice for droppers at any time of the year. 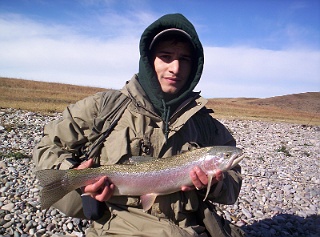 As the water begins to cool the fish start to relocate to their over wintering habitat. Pools with water depth of at least three feet or more are required to accommodate them once the stream freezes over. Fish that are found in riffles through out the summer will start to move to these areas. Pools are always a good place to focus throughout the year but they become even more important in the fall. Streamer fishing is a fun and effective tactic, particularly for fall spawners like brown trout. Browns can be very aggressive at this time of year and will often crash streamers with reckless abandon. The low, clear water allows the angler to see both his fly and the attacking trout making streamer fishing particularly exciting at this time of year. The lower water levels don’t require as heavy an outfit as in spring and often a floating line can be used effectively. I like to use lighter coloured streamers at this time of year such as white marabou streamers or the always reliable Kiwi Muddler are my choices. 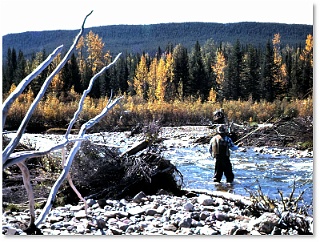 Low, clear water allows the angler to see both his fly and the attacking trout

You will also find that in the fall fish will be more active in mid-day than they are at this time during the heat of the summer when it is often necessary to fish early and late to be successful, especially with dry flies. This makes for leisurely fishing days, bankers’ hours if you will and after a full season of dining on bugs, trout are at their prime, fat, firm and full of fight. The best trout you catch all year may very well be one of your last trout as well. Make sure you don’t forget your camera as not only are the fish colourful at this time of year but the scenery can be spectacular. Wildlife is more active with the cooler daytime temperatures, making for some good photo opportunities. So if you're one of those anglers that hang up their waders after the September long weekend perhaps this year you should think about extending your season into the fall, it's a great time to be on the stream. 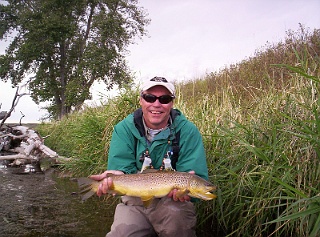 Think about extending your season into the fall, it's a great time to be on the stream