Chasing Winter Whites One Lake At A Time

This winter my home lake is Gull Lake, north of Red Deer and west of Ponoka. More to the point, the north bay has become my home waters. I’ve day tripped there 5 times as of recent, looking to unlock her secrets when it comes to winter whitefish. The question could be asked, why choose Gull Lake? For me it makes a lot of sense. It’s not too far from home, easily within reach of a day trip. It offers decent fishing for pike and whitefish, with the occasional perch adding to the mix. On slow days I’ll catch fish and on good days I’ll catch more. Another important consideration is the fact that I can keep fish. I like eating fish, be it a pike, whitefish, or trout, so the opportunity to bring some home has great appeal to me. 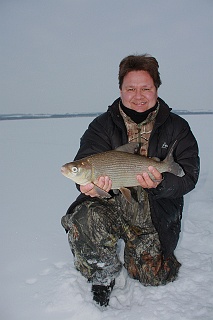 To get to know a lake takes time. Generally, if I dedicate an entire season to one lake, I’ll start to get a handle on what’s going on. That’s not to say that I don’t go fishing elsewhere, because I certainly do, but I consciously choose to spend more time at one lake with the intent on learning it, and learning it well. The interesting part of this story is that several years back I had already declared Gull as my home lake. Wally Warawa and the rest of the gang from the Edmonton Oldtimers Fishing Club offered to take me there in the summer and troll sinking flylines for whitefish. In one short afternoon the gang showed me that, not only can whitefish be targeted in summer, but that these whites offer great sport and could be caught in tremendous numbers. Their location of choice was the area in and around Birch Bay located on the west-central part of the lake. Their tools of the trade were type III and type IV sinking flylines trolled over 10-14 feet of water, using a hook they tied called a lazer wrap. The hook would skim along just above bottom and the whites were there to eat it.

It took one trip to see the potential, and then another dozen trips to get it down solid. For two summers I returned time and again to learn all I could learn about Gull’s summer whites. All thanks to the Edmonton Oldtimers and their willingness to share it with me. But a summer fishery does not necessarily translate into a winter fishery, and at Gull this is exactly the case. The places I did so well during open water are sporadic when things freeze up. So it was on the advice of Randy, who manages the west end Fishin’ Hole, that I try the north side. It is typically shallower and generally more consistent when it comes to catching winter whites. I went there and it was. The water is generally 6 to 8 feet deep with weeds interspersed and on an average day I’d see around 20 whites. They don’t always bite, but they are definitely calling the north bay home which is fantastic. Knowing that I’m on fish, I’m more confident when I drop a hook down. 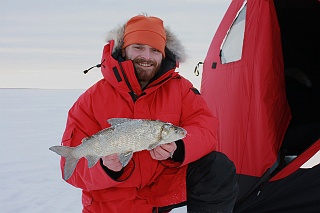 They don’t always bite, but they are definitely calling the north bay home

The accumulation of knowledge comes from getting out there, being observant, talking to people and fishing. Over my trips to Gull I’ve seen several patterns develop and it’s helped put me onto more fish. I think the following three patterns have been the most important so I’ll share them with you. First, more whites bite in the morning than at any other time of day. Generally, but not always, 90 % of my whitefish action happens before noon, sometimes 1:00 pm if it’s a good day. Knowing this, I’m on the ice at first light. I’ll fish hard those first few hours of light and if I’m not seeing fish within 15 minutes of dropping a hook down, i’m moving holes. Whites will show themselves if they’re around. 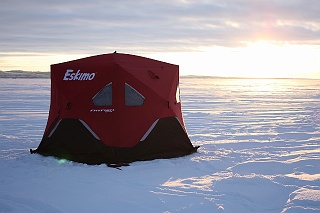 Second, i’ve noticed is that a feeding white is a suspended white. I fish my trusty yellow wireworm or beadhead nymph from the bottom up through the water column to just under the ice, but it’s at that depth from one to three feet off the bottom, mid depth most people call it, that produces at least 80 % of the bites. Interestingly I’ll see a fair number of whites cruising tight to the bottom, but most of those whites don’t bite. The final pattern is bottom substrate. Where I fish at Gull the weeds are patchy, but if I can find a bottom that had very light, low weeds that barely come off the bottom, I’m in business. It seems the whites like to swim these areas picking off bugs of every sort. Places that are strictly muddy, and places that are dense in weed growth have less fish frequenting them. 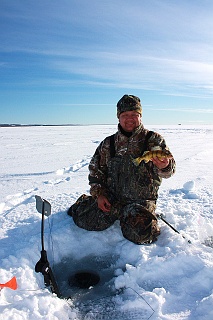 I’ve also taken to opening up the stomachs of the whites I keep and a really cool pattern is developing. Most every white is eating hyalella shrimp. They are those little olive green coloured shrimp around the size of a grain of rice. Knowing this, I’ve been using smaller beadhead flies in olive colour and the whites have been taking them well. That’s what I’ve learned so far in the world of Gull Lake whites. May some of these observations translate in to better fishing success for you.