My first exposure to small stream fly fishing was also my first exposure to actual fly fishing. Growing up in B.C. we did plenty of trolling with flies on a fly rod, caught plenty of fish, and considered ourselves just a little more sportsman like than those trolling with willow leaf trolls and a worm, although there were many times when we had to resort to that method when the trout were being stubborn. When we moved to Edmonton, a neighbourhood friend invited me to spend the weekend and do some fishing with him and his dad at their family cabin near Robb, Alberta. While my friend and I struggled to get our spinners into likely looking spots without the willows grabbing them, his father was upstream pulling out trout on a regular basis. I watched him take his fly rod, which was much longer than our spinning equipment, and using a technique which I would later learn was called "dapping", guide his fly into likely looking spots, only to have the small rainbows that inhabited the creek race each other to eat it. Later, Stauffer Creek near Caroline Alberta became my “home” stream which started a "Love - Hate" relationship with small stream fly fishing. 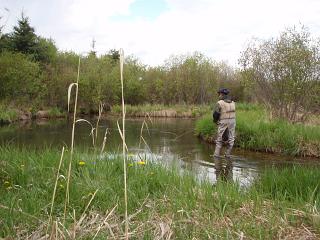 When anglers think about fly rods for small creeks most will automatically think that shorter is better, this is not always the case. While there are advantages to a shorter rod on very brushy streams most of them will not handle a lot of the conditions you will encounter on small streams. Open meadows and beaver damns are two good examples where a longer rod will be to your advantage. I find that an 8 1/2' - 9' rod works well in most situations. While weight forward lines have become the norm in the world of fly fishing, where, like everything else, farther and faster are better. In small stream fly fishing, a double taper line is your best bet. Double tapered lines roll cast better, are more accurate, and land gentler on the water, all good things on small streams. Lines that are drab in colour will be less likely to spook fish, lines that are bright in colour will flash in the sunlight while casting and also look out of place, trout are used to weeds, sticks and such drifting downstream, none of which are sunrise orange in colour. Fly reels are often referred to as "just storage devices for your line" and with small stream fishing that is quite true but there are a few things you should look for if you are purchasing a reel specifically for small stream angling. The first thing is that you will be pulling off line and reeling up line much more than you would on a larger river, therefore the reel should have a smooth adjustable drag to prevent backlash and make this easier and problem free. The second thing to consider is that your reel is probably going to take a fair bit of abuse, climbing over rocks and log jams etc… will certainly cause some bumping and banging of the equipment. Cast reels will break if dropped, machined ones will bend, whichever reel you chose be prepared to replace it every few years if you do a lot of small stream angling. 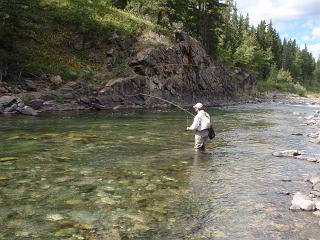 Most anglers, myself included, carry way too many fly patterns with them. This is compounded on small streams where the insect life is usually sparser and the trout have to be much more opportunistic. This is not to say that small streams don't have hatches like larger streams, it's just that small stream hatches will be less intense than what happens on larger streams. During these hatches a twelve inch cutthroat can become just as selective as a twenty inch brown, and you should be prepared to match the hatch in these situations. You will want to have a good selection of dry flies with you, some parachute patterns in different sizes and colours will cover the mayflies. For Caddis flies and Stoneflies, Stimulators in various sizes and colours will do the trick. The patterns that you don't want to be without on small streams are terrestrials such as ants and beetles. There are many areas on small streams that brush and logs come right up to, into, or overhang the water. Ants, beetles and other land insects inhabit this vegetation and will get dislodged into the stream on a regular basis providing an easy meal for trout. While many anglers don't associate streamers with small streams I always make sure to have a few in my small stream fly box. 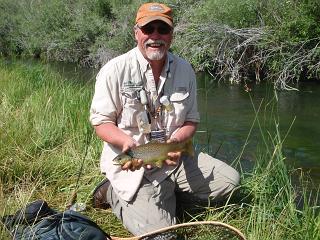 Reading the water and figuring out where the trout will be is easier on small streams compared to larger streams and rivers. The trout will be in all the usual areas and these spots are usually much closer together on small streams. Locations such as bank undercuts, behind and in front of rocks, bends and pools all are good locations to look for trout to be holding. Trout need a few things to survive in streams of any size, food, shelter from heavy current and safety from predators. In small streams the most important one is safety from predators. In larger rivers there are usually many areas of depth that provide overhead cover from predators, small streams do not tend to have as many of these. As a small stream angler you will need to concentrate your efforts on not only areas of depth but also any other spots that provide overhead cover such as overhanging branches and willows, logs and log jams, behind and in front of rocks, undercut banks and beaver ponds. 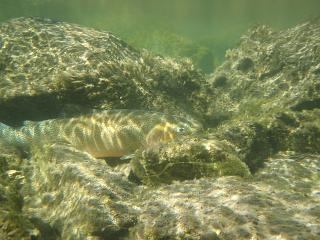 In small stream fly fishing long casts go out the window and the angler must learn to do two things to improve his odds of success, roll cast, and make short, accurate casts with very little line out of the rod tip. Roll casting is a method that is greatly underutilized by today's angler; this method lets the angler make casts without the fly getting behind him, thus eliminating snags on the backcast. It also allows the angler to make multiple short distance casts without having to continually reel up and change positions. The angler simply wades slowly upstream making short roll casts likely looking spots. This method works well with both dries and nymphs. The key to this method is working upstream slowly and stealthily so as not to spook the trout from the area you are about to cast to. When fishing with a partner the "hop-scotch” method is often applied where anglers leap frog each other to ensure that you are both fishing undisturbed water. The other method is one-up, one down, where one angler walks downstream and then fishes his way back up while the other angler fishes upstream and walks back down at the end of the day.

Nymph fishing in small streams is quite often very difficult to do in the traditional way of casting a weighted nymph or two, along with split-shot and a strike indicator upstream. The problem with this method in small streams is that the bottom depth is going to vary in depth over a much shorter distance, and would require constant adjustment of this rig. Much of the angler’s time would be spent snagged on the bottom. What I like to do is fish an unweighted or lightly weighted nymph a foot or two below a small yarn strike indicator. This lets the nymph sink far enough below the surface to look like a drifting nymph yet keeps it off the bottom in all but the shallowest areas. For the yarn indicator I prefer white as it looks like foam or air bubbles on the surface, much more natural than chartreuse or fuchsia.

Dapping is another method that lends itself well to small streams. In this method the angler simply has his leader and a foot or two of fly line outside of his rod tip, the fly is then basically set into position on the water's surface and guided into position by the angler, skating, hopping and dead drifting the fly downstream while following it with his rod tip. This may not seem like fly fishing in the traditional way but is sometimes the only way to reach willow choked areas of streams where a cast of any kind would be impossible. Once I have fished far enough upstream and it's time to head back down I will often put on a small streamer and fish it back down. Some corners and undercut banks lend themselves well to this method and often the biggest fish of the day will take your streamer. Stay on the bank as much as possible when fishing downstream so you are not kicking up silt and debris that will wash downstream and warn fish of your approach. 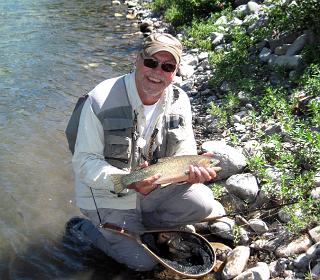 Often the biggest fish of the day will take your streamer

June 15th is when most of the small streams in Alberta open for the season and while late winter and early spring outings to the Bow River help somewhat; it's the small stream angling experience that really makes me look forward to summer every year. Get out there and fish some small streams this season, i’ll go downstream, and you go up.