Grayling of the Boreal

The fish were pretty scarce, even though my fishing partner Jess and I were quite a ways back into the boreal. It had taken the better part of an hour trucking down oil well roads to get to our jumping off point, and then it was still a hike to get to the stream. All the pools close to our access point were blanking out which is often the case when it comes to grayling. We kept moving, pool to pool, casting flies and a size 1 Panther Martin spinner. Then around that magic 500 meter mark, it happened. The fish were there, and the pools were full of happy, hungry grayling. This happens way too often to be a coincidence. In many of the streams there is a general lack of grayling close to access points, but take a half hour walk upstream or down, and most assuredly the secrets of that ribbon of water will open up. 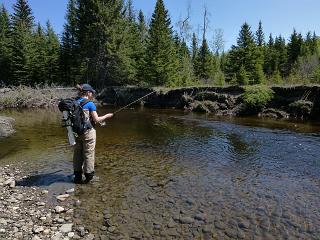 Then around that magic 500 meter mark, it happened

Catching grayling is very straight forward, and I would say the most effective lure for them is a fly. The wonderful thing about grayling is that they really are not that particular about what fly they’ll go after. As long as the fly looks buggy, it will generally do the trick. My personal favourites are the bead head nymphs and a size 10 is my number one choice, followed closely by a similar sized bead head pheasant tail nymph. This may seem like a big fly, but most grayling will hit it straight up with no muss or fuss. 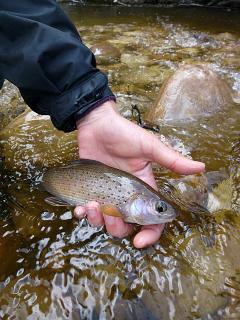 most grayling will hit it straight up with no muss or fuss.

When I fish little streams that are easily negotiated, a light action spinning rod is all I need. I tie on the bead head nymph and flick it into promising pools. If the streams are a little bigger some casting is required and I’ll attach a dime sized bobber, suspend the nymph a foot or two below it and cast to the head of the pool. Sometimes the grayling will even eat the bobber which is kinda fun to watch but most often the bobber will dart under hard and fast on the first drift. The really cool thing is if I miss the strike, I cast the rig right back and more often than not it will give it another go giving me a second chance. 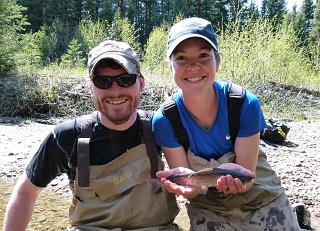 Sometimes the grayling will even eat the bobber

At times you will encounter a hatch happening which provides the challenge of trying to match the hatch. Quite honestly, if I have a caddis fly imitation, a mayfly imitation and an ant, I’m good. The caddis and mayflies are the standard insects that hatch in these streams and the ones grayling look up for. The lowly ant, that’s different beast all together. I’m figuring ants have to be one tasty critter in the eyes of a grayling because if they’re looking up and an ant comes drifting by, it’s bye bye ant. Grayling like them that much. 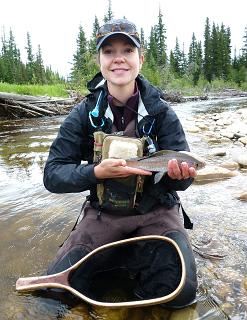 If an ant comes drifting by, it’s bye bye ant

After spending the vast majority of my season last summer doing nothing but chasing grayling, I’ve come up with a few tidbits that will surely help you tag more fish. The first is that grayling are pool lovers, and if undisturbed, you’ll find them near the heads of pools were the riffles come in. The second, if this pool has a downed log for cover, there’s a very good chance you’re gonna tag one of the bigger grayling right under that log. And third, there is a stream hierarchy among fishes and generally grayling will outmuscle whitefish to the fly almost every time, so when you start catching whites, be confident that most of the grayling that were going to bite, have already done it.

There is one exception to using bead head flies when it comes to streams that have minnows and very large grayling. When grayling get big, which in Alberta puts them around 35 cm or so, some will adopt a slightly different diet. That is, they convert to eating fish. When this happens no little fly will get them to show, but throw a minnow imitating fly (don’t be shy about the size) and they will appear out of nowhere. Just be ready for the occasional bull trout to shark out and hammer your fishy fly too, but there’s obviously nothing wrong with that either. 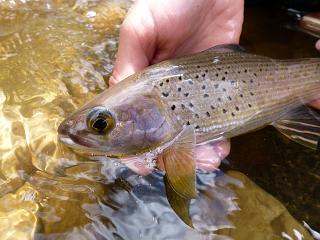 they will appear out of nowhere

Grayling are native to the boreal, and where they’re found, they’ve come to symbolize a healthy habitat. I like them because they’re a ton of fun to catch and have a very striking appearance. They are angler friendly and fly hungry, and to me this makes them a great fish to go after. 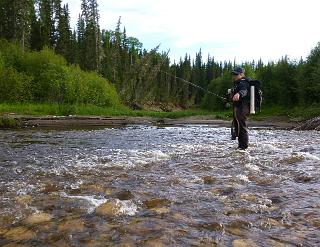 they’re a ton of fun to catch