Versatility the Key to Success

On a trip to remote waters along the Hudson Bay coast to fish brook trout last summer, I went well-stocked with traditional brookie wet fly patterns – Parmachene Belles, Colonel Fullers, Trout Fins, Montreals, McGintys and the like. They’ve stood the test of time for more than 100 years and I was confident they’d serve me well. The literature is chock full of tales of wet patterns producing when cast down and across. Well, apparently the Sutton River’s squaretails don’t read the same fishing stories I do, as after two hours in a river teeming with fish I’d managed to hook but one. Fortunately I’d arrived well stocked with options, so I clipped off my #8 Silver Doctor and tied on a 2/0 mouse pattern. On my very first cross-current cast a 4-lb. Brookie hammered the fly on the surface. Needless to say, that signalled the end of the “traditionals” on this trip. 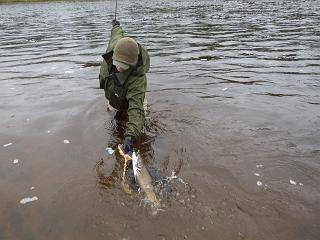 a 4-lb. Brookie hammered the fly on the surface

The lesson that was reinforced to me was that the successful angler is the one who’s willing to forget their preconceived notions about what presentation “should” work, and experiment until they find one that actually does work in the current situation. Two subsets of fishermen come to mind that exemplify a dedication to versatility in their strategies, tournament anglers and ice-fishermen. 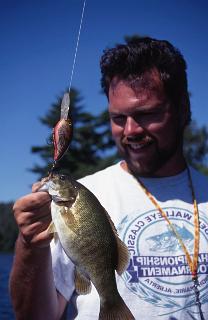 They simply can’t afford unproductive fishing hours when their reputation

Among the many benefits that competitive walleye and bass fisherman have introduced to the rest of us is a certain lack of patience. They simply can’t afford unproductive fishing hours when their reputation, stature and livelihood might be on the line. As such, many of the strategies anglers accept as standard fare today emerged from the creative minds of tournament anglers not that long ago. Similarly, successful ice-fishermen have long recognized the value in mixing it up when the action slows down. In their case it’s often not the bait or presentation that they adjust, but rather the location. Everybody may have been nailing whitefish in 16 feet of water yesterday, but if they’re not finding them there today, experienced ice anglers are not at all shy about moving in or out to locate fish. 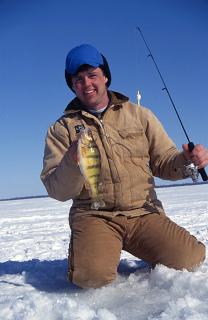 experienced ice anglers are not at all shy about moving

In fact, the average spin angler is probably the most guilty of “dying in the hole”, covering the same water the same way, over and over, despite a lack of success. You know what they say, the definition of insanity is doing the same thing over and over again while expecting different results. Well, I suspect a lot of us could be rightfully accused of being insane more often than we care to admit. Fish are subject to a vast array of variables that influence their behaviour. Water temperature, air pressure, water level, current velocity, precipitation, surface disturbances, sunlight, water chemistry, prey distribution and availability, wind direction, plant growth and numerous other environmental factors can all impact how fish are going to react at any given time. The astute angler recognizes that these factors are at play and comes prepared to adjust his tactics accordingly.

Fifteen years ago friends and I were testing our prowess on the channel catfish of Manitoba’s renowned Red River at the Lockport dam. The most common presentation at the time was a stationary bait, usually cut goldeye, shrimp or chicken livers, on a three-way swivel from an anchored boat, using a pyramid sinker to hold the bait in place. We’d barely begun fishing when our anchor rope broke, making it impossible to hold our baits steady in the Red’s strong currents. With no other obvious options, we motored up into the quiet waters of the spillway, rigged up with slip bobbers and began drifting gently through the spill waters. We were completely surprised when we hooked up a double on our first pass. For the next two hours we repeatedly motored up to the spillway face and drifted down, seldom getting more than 100 metres downstream before connecting. We had several more doubles and even one triple before calling it a day. I guess it’s true that necessity is the mother of invention, as we’d never heard of anglers slip-bobbing for cats before, but on our best day we’d never previously enjoyed that level of success. In fact, we hadn’t even heard of anglers fishing the spillway for cats, but it underscored the importance of experimentation when things aren’t going according to plan. We went back the next day and repeated the performance just to prove to ourselves that our success was no fluke. I won’t claim that we were the first to use the technique, but slip bobbers have become a popular option for Red River catfish since then. 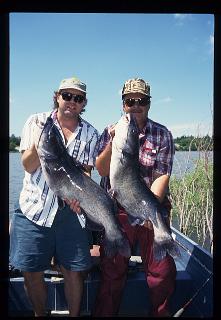 We were completely surprised when we hooked up a double on our first pass.

Developing a mindset for versatility requires attention to two primary components – where you fish, and how you fish. Where you fish is all about keeping an open mind about where in any given body of water actively feeding fish can be found. Walleye are notorious for using different parts of a lake in their search for prey. At times they’ll hold fast to bottom structure in deep water, while at other times they’ll chase baitfish in water waist deep or less. On other days they’ll key in on suspended prey, meaning they’ll be found mid-column. Electronics can certainly help locate fish, but you have to be actively seeking them in a particular part of the lake to find them. How you fish refers to your presentation. Slow or fast, live bait or not. From jigs bounced and bait-rigs retrieved steadily along the bottom, to slip-bobbers presented mid-column, to crankbaits cast or trolled at depths from the surface to chugging through the mud. All will produce at times; the challenge for fishermen is to experiment with a number of different locations and varied tactics to discover where the fish are and how aggressive they are at any particular time. 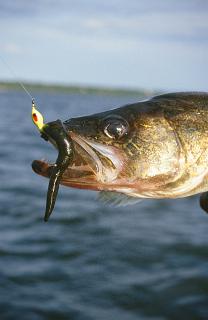 From jigs bounced and bait-rigs retrieved steadily along the bottom

This willingness and preparedness to experiment has long been a staple of the pros; have you ever wondered why they have half a dozen or more rods strung up and ready at all times? For most of us, a vast array of rods all set to go at a moment’s notice is not practical. What is practical and productive, however, is the ability to admit when we’re not catching fish, the willingness to search for them, and the diversity of tackle that allows us to put the right lure in front of a fish when, where and how they want it. At the end of the day, versatility may be the most important lure in your tackle box.