There are three lakes that have taught a ton about fall walleye. The first was over a dozen years ago. I was routinely going out to Calling Lake and catching walleye all summer long by dragging a spinner rig off a bottom bouncer. And if all I did was drag a spinner rig all around the lake, I would surely catch walleye, including some real wall hangers, those seven, eight, and nine pound giants. I caught walleye like nobody's business and the fishing was so good I was trying to get my dad to come out from Prince George, BC, to get in on this great fishing. He did, but it wasn't until late September. 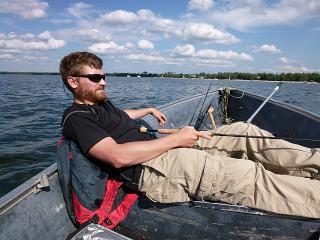 We got in the boat and I assured my dad that all we had to do was stick a minnow on a spinner rig and drag it along bottom with a bottom bouncer and the walleye would do the rest. After three hours without so much as a touch, I knew something was wrong. Given that the fish were rocking our spinners only a month before, this absence of aggressive hard biting walleye had me shrugging my shoulders and shaking my head in an appeal to my father that I was not just making up fish stories. 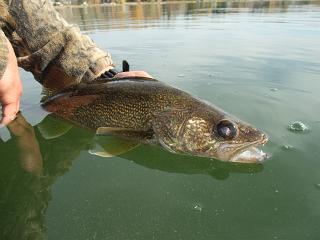 Thinking about things more critically, I stuck my hand in the water. It was hot out, but the water was nearly ice cold. "Hmmm...Could it be?" I said to myself, then spoke out loud, "Dad, reel up your line, we're gonna try something different." So we did and both of us tied on a jig tipped with a minnow. I went to what I believed was a great spot and we dropped the jigs to the bottom, and then we rested the rods against the side of the boat and did absolutely nothing. The barely perceptible breeze pushed the boat along at a snail's pace, slowly dragging the jigs across the bottom. About 10 minutes in, the rod started to bend, and just continued to load up. We picked it up and there was a walleye, and then we caught another, and another. Slowing down our pace was the key in getting them to bite. 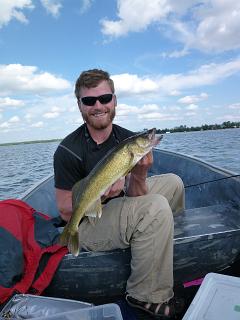 At Pigeon Lake we often troll cranks to tag into some great summer walleye action, but summer had come and gone. In fact, it was early October, there was hardly a boat on the water and the walleye were having nothing to do with our crankbaits or spinner rigs. On this day it was cold and windy, so drifting a boat was not an option. Our ticked to slowing down was to drag the boat forward with an electric motor and set ourselves up with Lindy Rigs.

If you've never fished with a Lindy rig before they will take some getting used to. It's a rig designed for light biting walleye, which are often the type of walleye we find come fall. You can purchase all your components at the Fishin' Hole and have the staff assist you so you're sure on how to set it up. The idea though, is that you drag a slip sinker slowly along bottom. The sinker butts up to a swivel, where on the opposite side a two to three foot leader is tied with a single hook attached on the end. I typically use a frozen minnow as bait.

With the Lindy rig set up I let out line until the weight is dragging bottom and then I use my index finger to pinch the line to the rod so it stops coming off the reel, but I keep the bail of the reel open. At the slightest bite, or sharp tic, I'll release the line from my finger and count to three. I'll then close the bail and see if the rod loads up under the weight of the fish. If it does, I sweep it forward and bring the walleye in. If the walleye is not there, on the next bite I'll drop the line and wait 5 seconds before closing the bail. The beauty of this system is any time I drop the line and it free spools off the reel, the line is also slipping through the slip sinker so a light biting walleye feels absolutely no resistance whatsoever and will be more likely to eat the minnow. This is a great fall technique, but like I said earlier, it takes some getting used to. 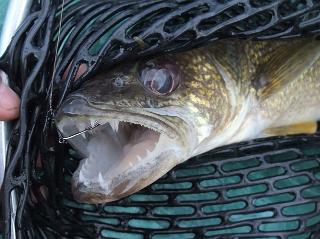 Fall walleye at Jackfish Lake forced me to simplify my rig even further. While the Lindy rig is awesome, it takes a certain amount of ability to detect the bite, drop the line, allow the line to free spool for a few seconds, then close the reel and catch the fish. It's wonderful when it all comes together, but asking this of a brand new angler, or a very young angler is just not reasonable. Out goes the Lindy rig and in ushers a new way of dealing with fall walleye. 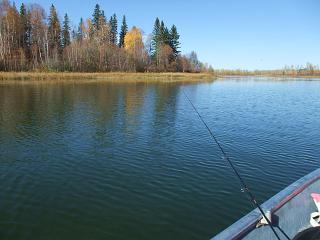 My daughter, who was 7 at the time, needed something far easier. Necessity became the mother of invention, and soon I had my trout rods out, spooled with 4 lb test. My components were the epitome of simplicity. I attached a split shot for weight that was only heavy enough to get hook and minnow to the bottom, then I back trolled with an electric motor, super slowly dragging the minnow along. Then the most important part, we put our rods on the side of the boat and out of our hands. Light biting walleye with peck and tap the minnows, telegraphing nibbles through to the rod tip. We just left it alone, and then after a while, some walleye would have enough and full on eat the minnow. The rod would load up and bend heavily to the water. It was then we'd pick the rod up and reel in the walleye. The simplified method worked incredibly well, and has now become our 'go to' method for dealing with light biting fall walleye. 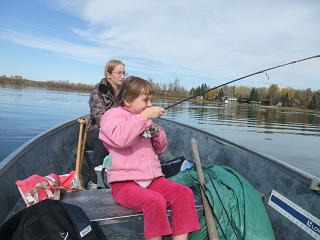 To summarize a good fishing strategy for fall walleye; lighten up, go slow, and get some bait to the bottom. Wait out the bites and when the fish has really latched on, then pick up the rod and bring in the fish. Do this and you'll be catching walleye steady throughout the season. 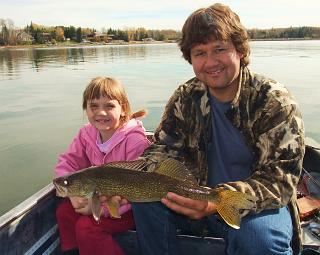