While Pacific salmon are revered as a game and table fish by throngs of Canadian fishermen, at a global scale it's the "other" salmon, the Atlantic salmon, that puts Canada on the bucket lists of the world's travelling anglers.

Many Canadians think of Atlantic salmon fishing as an exotic pursuit reserved for the wealthy elite, requiring oodles of money and time. This impression is not without some merit, as there are few good Atlantic salmon streams near large and easily accessible population centres. Further, it's true that some of the premium reaches are tied up in private hands. But, with a little homework you'll find that Atlantic salmon are more than attainable for the average fisherman. Certainly anyone capable of investing the time and money required to fly- or drive-in to a northern or east coast fishing lodge can access superb Atlantic salmon angling. And if you're one who revels in thrilling fishing, you owe it to yourself to give it a try. 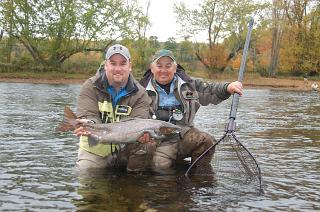 Before you do, there are some caveats you should be aware of. To begin, Atlantic salmon fishing is exclusively a fly-fisher's pursuit. And if freezing a winter's supply of fish is your priority, you should look to the west coast, not the east. Having said that however, fly-fishing for Atlantics isn't anywhere near as tricky as casting to a rising brown trout in a foothills stream; they're not particularly leader shy and the standard presentation is a down and across drift, not the challenging drag-free presentation that's required to fool many trout species. And while they are superb on the table, most Atlantic salmon fisheries have very restrictive harvest regimes. Go for the challenge and excitement, not the meat. 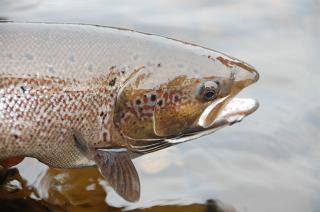 For those more familiar with western angling, the pursuit of Atlantic salmon is more akin to steelheading than it is to fishing for cohos or springs. They're fished exclusively in freshwater as they move upriver to spawn. Atlantic salmon rivers can have several runs annually - the famed Miramichi, for example, has both spring/summer and fall runs of fish. Sharing a reputation with muskies as "the fish of a thousand casts", Atlantics are undoubtedly a fish requiring patience and persistence, but the reward of a hooked fish is worth every hour of the effort to get there. Like steelhead, Atlantic salmon are superb acrobats, and few are the hooked fish that don't leap several times in a desperate effort to spit the hook. Experienced Atlantic salmon anglers for good reason often talk in numbers of fish hooked, not landed. 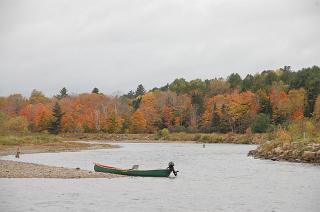 Beyond the challenge of Atlantic salmon fishing, those who've tried it can't help but be enthralled by the traditions and history. Guided trips for Atlantic salmon in Canada were offered in the early 1800s, and there are lodges in operation to this day that trace their roots back to the latter part of that century. The popular pools and runs all have long-standing names and the classic feather-wing fly patterns sport names like Jock Scott, Green Highlander, Silver Doctor and Lady Amherst, all well steeped in lore and legend. 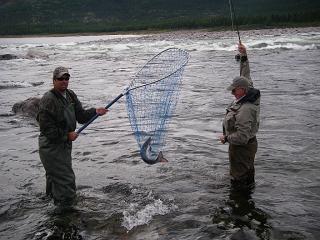 To the uninitiated, the biggest challenge tends to be the same, "Where do I go and when?" Unfortunately, the answers tend to be ambiguous, not because the respondent is protecting his water, but rather because Atlantic salmon are fish constantly on the move and these travels are not easily predicted. Unlike Pacific salmon that spawn once then die, mature Atlantic salmon will return to their natal streams to spawn annually, sometimes for several years though typically for two or three. They tend to be very sensitive to water conditions when it comes to migrating from the salt into their freshwater spawning rivers. For example, 2012 in many parts of Atlantic Canada was seen as a fair to poor year for salmon angling as river levels were low and water temperatures were high. This impacted both the number and timing of fish entering the river systems. Alternatively, 2013 was just the opposite - water levels were high and fish movements upstream were widely dispersed both temporally and spatially. Therein lies both the mystique and attraction of Atlantic salmon fishing - their unpredictability. 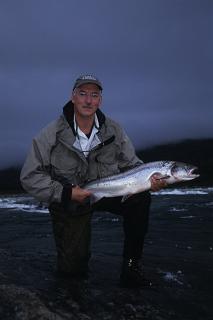 Notwithstanding the above, Atlantic salmon return each year to their natal streams, and some of Canada's rivers are revered in world-wide salmon circles. In Nova Scotia it's the Margaree, LaHave and St. Mary's. In neighbouring New Brunswick, arguably the best and most esteemed Atlantic salmon destination in the world, the Mirimachi tops the list. Considered by many as the single greatest Altlantic salmon river, with annual runs exceeding 150,000 fish, the Mirimachi and her tributaries offer nearly 800 miles of salmon water. And despite what some would suggest, 40% of this is available to the public. Other renowned rivers here include the Saint John, the Tobique and the Restigouche, the latter of which is celebrated for the number of exceptionally large salmon it gives up annually.

Quebec has no shortage of quality salmon streams, found from the Ungava region in the extreme north to the Gaspe' Peninsula, the North Shore and Anticosti Island. The most popular of these rivers include the Bonaventure, the Matapedia, the Cascapedia, the York and the George. 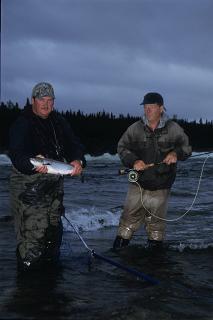 Newfoundland offers several well-known salmon streams, with the most popular the Humber, the Exploits, the Gander and the Grand Codroy. Labrador boasts many quality salmon fisheries, though most are remote and therefore difficult and costly to access. The most popular and accessible today is undoubtedly the Eagle River.

The aura surrounding Atlantic salmon angling has evolved for a number of reasons, including their well-earned reputation as beautiful, hard-fighting fish that live in gorgeous rivers. And for my money, that's enough to put them on the bucket list of any angler who wants to enjoy what is arguably the quintessential Canadian angling experience.