The Fly Fishing Season Ahead

Sometimes the planning of a trip can be the best part, this year the planning of the whole season is what is helping me get through this long, cold winter. This year is unlike any other due to the changes and destruction to Alberta's' trout streams caused by last year's floods. It will be interesting, to say the least, to see what the upcoming season brings.

I will start my year, as always, on the Bow River. I usually get out several times during the winter months but with this year's colder than average temperatures I have yet to fish the river in 2014. The Bow was severely affected by the flood in June of 2013 but by all accounts is going to be OK. The fishing after the flood waters subsided was quite good with all sizes of Browns, Rainbows and Whitefish being caught. I usually float the city stretches of the river in the spring, opting not to fight with ice banks and poor road conditions at the Mckinnon Flats boat launch. Floating from the Glenmore Bridge to either Fish Creek park or Policeman's flats gives you plenty of water to fish and, at times, you can actually forget you're within the city limits. I will also walk and wade the Carburn Park section of the Bow near my house and continue to relearn it. 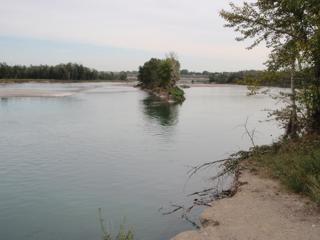 Before the flood in June 2013 the Bow River used to flow entirely to the left of the island in the middle of the picture, to the right used to be a pond in Carburn Park

The central Alberta brown trout streams will be my on my calendar in the month of June. Stauffer Creek, also known as the Raven River, is a small creek that magically arises out of the ground north of Caroline, Alberta and although I don't fish as often now that I live in Calgary, I still get there at least once or twice a year. The Fishin' Hole holds its fly fishing school there for two reasons, because it's a spring creek it is always fishable and it's a tough creek to fish, as we tell our students, if you can catch a fish here, you can catch one anywhere, and many of them do. While I'm in the area I'll check out the other brown trout streams in the area. I'll stop in at a friend's place on the South Raven and see if there are any Salmon flies around and perhaps stop and fish Prairie Creek, a creek that has always been either feast or famine to me. This area gets a multitude of hatches throughout the season, March Browns, Green Drakes, Brown Drakes, stoneflies and more. The dry fly fishing can be spectacular or frustrating beyond belief, it changes daily. 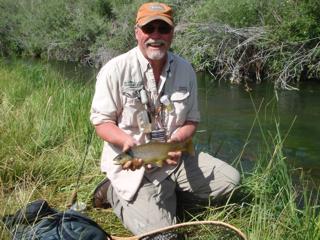 In late June or early July I'll try to sneak down to the Missouri River near Craig, Montana for a few days. Craig is what I would call the consummate "trout town". A small unincorporated village located in between Great Falls and Helena Craig has three fly shops and if you're not driving a pickup truck towing a drift boat you are out of place. The Missouri River below Holter Dam holds as many or more Brown and Rainbow trout per mile than any stream in world. Less than eight hours from Calgary the Missouri provides some of the best dry fly fishing you can imagine with "pods" of large rainbows gorging themselves on whatever bug or bugs are hatching at the time. If the fish aren't eating on top the nymph, fishing is always productive. The Missouri near Craig is basically a big spring creek due to the numerous dams controlling the flow upstream. My friends Nick and Janice from Edmonton and I have been making the trip to the Missouri for somewhere around twenty years now, the last two we have added a few days on the Beaverhead and Big Hole rivers near Dillon Montana in hopes of hitting the world famous Salmon Fly hatch. After two years of missing it by a week, one year too early, one year too late, the Missouri will get all of our attention this year and the Big Hole and Beaverhead will have to wait perhaps until retirement when we can afford to wait for the hatch with no work commitments to get in the way. 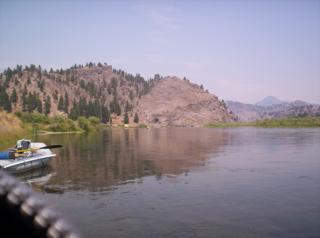 The Missouri River near Craig, Montana is like one big spring creek

I always try to resist heading south-west to fish the east slopes streams too early, even though they open to angling in mid-June I try to resist their temptations until mid July or early August. My three favourites, the Oldman, Livingstone and Highwood all had good populations of cutthroat and bull trout as well as some rainbows and cutbows (rainbow - cutthroat hybrid). The Highwood river had major flood damage last season and was disappointing for me both in terms of fish quantity and river course changes. One area that use to have several long deep runs along a rock wall had moved 50 yards south and was a braided stream of four smaller calf deep rivulets. The upper river near Cat Creek, where I love going, was never open to anything but bike or foot traffic due to the highway being washed out, the trout in that section should be well rested. The Livingstone River, while it had some sections change, seemed to be less affected in both fishing quality and seemed to have less course changes. It will be interesting to see what they look like after this year's run off. Will the river revert back to previous channel or remain in its new route, will the fish that survived the flood find new overwintering pools to survive the winter? Hopefully the insect populations will not have been damaged too much, all three of these streams can produce great hatches of green drakes which provide great dry fly fishing when the hatch is on. 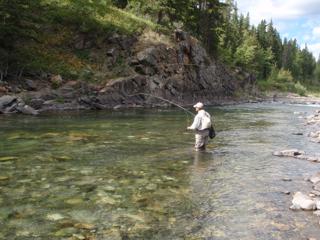 Once runoff ends I'll start fishing the "new" Bow and start learning the river over again. The flood and colder than normal winter will certainly not have helped the fish populations, hopefully it will not have hurt them too badly. Many anglers feel that the river actually improved in some areas, especially the lower section, due to the flood. Some new undercut banks, gravel bars and such will provide habitat for the trout, and angling opportunities for the angler. It will be interesting to see how the insect populations made out, the river bottom was scoured severely during the flood and the insect populations will certainly have suffered. One thing you can count on in the fall on the Bow is the grasshopper "hatch". Hoppers are terrestrials (land dwellers) that often end up in the water to the delight of both the trout and the trout fisherman. Streamer fishing is one of my favourite ways to fish the Bow in fall, the fish know that winter is just around the corner and attack and smash big meaty streamers with reckless abandon. 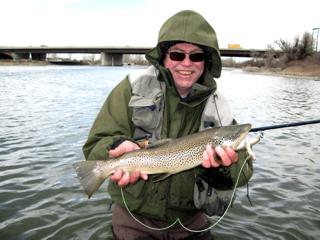 I always try to get out to the east slopes streams in October for one last visit before they close for the season. I love to fish small ant and beetle patterns for the hungry cutthroat trout, who are also keen on fattening up for the winter ahead. Fall in the foothills is one of the best parts of my fishing season, and a great way to end it. The colour of the leaves match the colour of the cutthroats and there are less people around. This year may also be the year I get out to Manitoba's parkland trout lakes for the big rainbows, browns and perhaps a tiger trout that I have heard so much about. Yes I will fish the Bow River during the winter, whenever the Chinook schedule and my work schedule mesh, but it is the dreaming and planning for the season ahead that gets me through the Alberta winters. 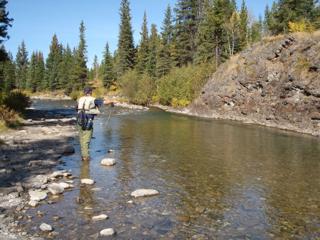 The season comes to an end on the slopes streams