When it comes to fishing in moving water, for a vast majority of Alberta flyrodders, it’s fundamentally an upstream affair.

Sure there are some cosmic Arctic grayling creeks around Fort McMurray and elsewhere in the northern boreal.

But the Front Range of the Rockies, whose snowfields and glaciers are the genesis of a myriad of trout, grayling and mountain whitefish streams, is the jewel in the Alberta flyrodders’ crown.

Of course, there are trout angling opportunities all over the landscape thanks to the progressive stocking program developed in the 1950s. When you get out from under the shadow of the Eastern Slopes, angling with a fly inevitably has a stillwater somewhere in the scenario.

So there was something surreal and unsettling about heading down the Yellowhead Highway with a couple of flyrods in the back, the morning sun in my eyes and a river angling experience in my immediate future.

I was riding out on the flatland at the invitation of Alberta’s premier downriver guide Shane Hansen (www.northsaskatchewanriverguide.com) for a day of flowing water flyrodding.

Our target water was only a short jetboat trip from the Saskatchewan border and the flow we would be fishing had left its Saskatchewan Glacier birthplace a week or so ago.

And to pile it on, there were no trout or grayling present in the runs, eddies and glides of this stretch of the lower North Saskatchewan River we would fish.

I met Shane at the Heinsberg launch and rigged my rods while he launched his Marathon Marine jet boat. 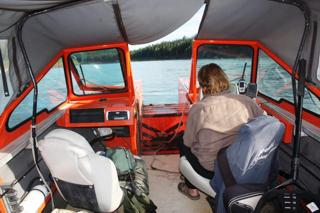 Shane Hanson at the controls of his Marathon Marine jetboat

Hansen has built a loyal client base offering trips on the big water for sturgeon during the run-off months.

And when the snowmelt and early summer monsoons have abated and the river “gins” up, he switches focus to the NSR’s prolific walleye population, which often yield triple figure days.

But that involves bottom fishing with nightcrawlers and frozen minnows from a static platform.

Flyfishing in a river context usually means going with the flow, casting to the likely-looking holes, buckets and current brakes.

Fortunately the lower North Saskatchewan has impressive numbers of insect-eating fish, willing and able to smack a dry fly presented over their feeding lanes.

None of them are species that flyfishers normally associate with our sport.

They are goldeye and more importantly their close cousins mooneye.

We loaded the gear, Shane backed the jet into the flow, hit the throttle and we were off.

The primal black poplar banks closed in on us. Up ahead a black bear swam the river. The Moose Island bald eagle rested in a towering river-bottom spruce. The North Saskatchewan down here remains pretty well the same as when David Thompson first saw it.

Almost immediately we found fish feeding in a slick.

Since it was mid-summer and there were no visible bugs present, I reckoned a hopper was something they might recognize.

I was correct and was immediately rewarded with a hook up when I twitched the foam pattern. A fish like a chrome hubcap launched in the morning sunshine and jumped a couple more times before sliding into Shane’s net.

The half crescent over its eye identified it as a mooneye. 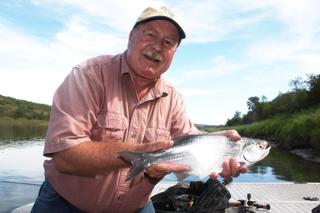 This was going to be easy. Or so I thought.

The rise suddenly ended, the fish switched off and it was over.

I put away the 5-weight dryfly rod, picked up my 8-weight walleye stick and was able to dredge up a couple of ‘eyes with a Bunny Strip streamer in a tempting Eddie known only to Shane.

Then there were insects on the water again. Fish began eating them.

A big tan bug with upright mottled wings, which I mistook for a hexagenia - Alberta’s largest mayfly - began drifting by.

On closer inspection it turned out to be a very large pale morning dun which was hatching sparsely over the feeding lanes.

Whenever one remained on the water for a prolonged drift it disappeared in an aggressive swirl.

An extended body Parachute Brown Drake worked well. Until the hatch petered out and so did the rise.

Shane ran the boat over to the shady south bank where we found a riffle literally boiling with rises.

But they didn’t want to know about the Drake or a number of other flies in my boxes.

Until I knotted on a generic H and L Variant which got the mooneyes’ interest again.

Downriver flyfishing species have largely flown under the radar, for a fundamental and compelling reason.

They have too many bones, their flesh isn’t firm and unless they are brined and smoked they are almost impossible to consume.

Luckily this eat-what-you-catch ethos is no longer a guiding principle for a majority of flyrodders who have advocated catch-and-release as a key conservation tenent.

What does count is a free-rising fish with enough mass to provide a worthy tussle on appropriate tackle in a gorgeous natural setting. A little mystery adds to the narrative.

Lower North Saskatchewan River mooneye tick all the boxes. Because they are largely inedible angling pressure over the years has been minimal and they inhabit the big river in prolific numbers.

The long leisurely march toward midsummer’s night had begun. The river turned molten pewter and the evening birds came out. 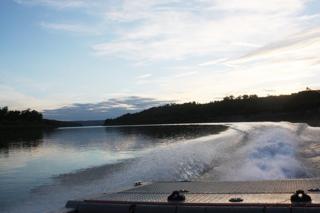 So did a snow-white mayfly. Not an occasional specimen like the day hatches. But in a great creamy mass, breeding in the soft evening air above the glides, them falling to the surface to deposit their eggs and die.

The river became electric with fish as we drifted homebound for Heinsberg, rising all around the boat in a manic feeding frenzy.

Spent insects lay in windrows along the current breaks as I searched in my fly supply for something somewhat similar to the bug on the mooneyes’ menu.

Blanket hatches like Shane and I were in the midst of can be as frustrating as they are fascinating.

The fish had clearly made up their minds what they wanted to eat. Close enough didn’t count. It was an exact imitation or nothing.

Snow-white, down-wing mayflies are an unknown entity on the Eastern Slopes trout streams. I’ve never encountered such a hatch.

So, needless to say I didn’t have a reasonable facsimile to offer.

I could only watch in amazement as the lazy river drew us homeward, while the mooneye hordes ignored my multiple offerings and fed in what can only be described as a frenzy. 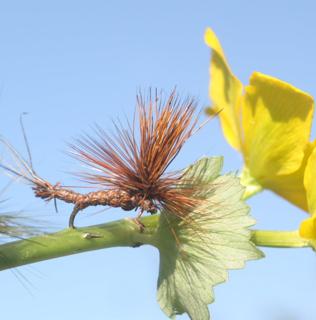