When most fly fishermen think of flies for spring they usually consider either large streamers or nymphs fished slow and deep. Dry fly fishing is usually a second thought and normally only if the angler sees a fish rise to a bug or, as often happens, hits their strike indicator. This happens to me usually once a year. That slap yourself in the forehead moment when you realize that if you would have been using a dry fly as an indicator, instead of a corky, you probably would have hooked a fish. Fish are hungry in spring and eager to put on weight after a long winter. Rainbows are preparing to spawn and need the energy to migrate to their spawning areas and build their redds. Anglers shouldn't ignore their dry fly boxes at this time of the year and if they are going to fish nymphs always use a big dry fly as a strike indicator. It's not unusual to have fish hit the dry. If you enjoy dry fly fishing, as I do, don't ignore it at this time of the year. You may not catch as many fish as with nymphs or streamers, but after the long cold winter we have experienced it’s a lot of fun just casting a dry fly and often you will be rewarded with an eager trout. 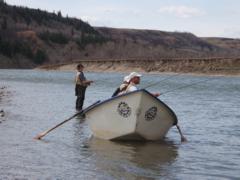 A spring day on the Bow

Some insects such as midges are available year round but due to their small size, #18 - #24, they are pretty much hit and miss as to whether trout are going to feed on them or not. Individual midges are often not substantial enough to get trout feeding, however, when there are large numbers hatching they will often end up in clusters allowing fish to get a mouthful at a time, making it very worthwhile. Tiny winter black stoneflies are also a winter and spring hatch that can provide some dry fly action. They will mainly be found while walking along the snow banks on shore as they do occasionally end up in the water. Stauffer Creek near Caroline and the Crowsnest River in southern Alberta both have good hatches of these bugs. 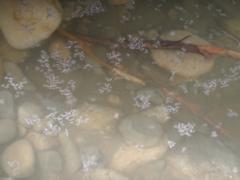 Midges are small but clusters of them make a meal

The first mayflies of the season on Alberta trout streams are Blue Winged Olives, a name given to the species by fishermen due to their olive coloured bodies and blue-grey wings. These mayflies start showing up in southern Alberta streams in May and are a size #18 or #20 dry fly. Although they are quite small in size their numbers provide an important food source for both fish and birds alike. In Alberta the blue-winged olives are the only mayfly hatch that we get twice a year, once in the spring (mid April through mid May) and again in fall (late August through October). While most anglers agree that fish seem to rise much better to the fall hatch, the spring event does bring some fish to the surface. After a long winter of nymph fishing, tossing a small dry fly is a pleasant way to spend a spring day. The other hatch that Alberta anglers see in the spring are the mayflies known as March browns. These are a larger mayfly and hatch in southern Alberta from mid May to mid June and are effectively imitated by a parachute Adams in size #14. This is a welcome relief after the much smaller midges and Blue Winged Olives. 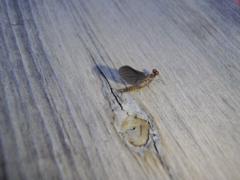 Blue winged olives are the first Mayfly hatch of the season

Caddisflies start showing up on the Crowsnest and Bow Rivers in mid May and can get the fish excited with their skittering and fluttering water dances. The first caddis of the season seem to be more of a midday insect while late evening and night time hours seem to be favoured by the July and August bugs. This is a blessing at this time of the year when the morning and evening temperatures can be quite cool.

Seeing small flies can be difficult at anytime of the year but there are a few tricks the angler can use to keep track of his fly. If using more than one fly is legal where you fish (three flies are legal in Alberta), try tying a larger, more visible fly a foot or so from the small fly. This gives you a visual clue as to where your fly is, even if you can't spot it on every cast you will know it’s location within a foot. If a fish happens to rise close to your indicator fly I would suggest you strike as you may also pick up the occasional fish on the indicator fly. Parachute flies that are tied with the hackle wrapped parallel to the shank around a post or brighter coloured wing material can also help the angler keep track of the fly. The post sticking up in the air makes this pattern highly visible and combined with a body that sits flush on the surface film makes this my favourite style of dry fly. Cheater flies can also help. An example of this would be tying two midges patterns, such as a Griffiths' Gnat, on a single larger hook doubling the size of the fly while still looking natural as they often end up in clusters on the water.

Often in the spring rivers are very low prior to the run-off leaving less water for the fish and their food source to occupy. Feeding lanes become much more concentrated making it easier to identify the areas where the fish will be feeding. The water can be anywhere from clear, to murky, to downright dirty at this time of year depending on a number of things including spring rain/snowstorms, feeder creek thawing etc. Anglers should not, however, be put off by coloured water at this time of year as the fish are hungry and need to eat. In fact, the off colored water can be an advantage, especially with the lower water conditions. Water temperature also plays an important part at this time of the year. If the water temperature is in the mid forties (F) the fish will be sluggish and dry fly fishing will be slow. If the water reaches the fifties then things really get rolling! 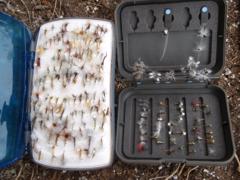 Don't forget your dry fly box early in the season

There is no special equipment needed for dry fly fishing in the spring as versatility is the key. You will only need to carry your regular fly rod as you will likely be doing more nymphing and streamer fishing than anything else. Just make sure to match your leader and tippet to the size of dry fly you are using if you decide to chuck dries.

Spotting fish rising at this time of the year can also be a challenge. Rises are often sporadic at best and you likely won't find fish rising rhythmically like you might in summer or fall. You also won’t likely find groups or pods of fish rising, single fish are more the norm at this time of the year. Blind fishing can also be productive. If you see a feeding lane that has bugs floating by don't be shy about throwing a dry. Sometimes something slightly different will be all it takes, possibly a little larger or smaller imitation of the insect, or, something completely different. Patterns such as ants and beetles or attractors such as Royal Wulffs or Humpies will sometimes do the trick. 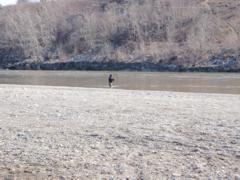 Last year the spring run-off hit the Bow River and its tributaries with a vengeance on June 20 and dry fly fishing was non-existent for a long time. Insect life in streams was altered severely, however, it seems that no matter how cruel mother nature is the fish and the insects find a way to survive even this type of flooding. This year's pre-runoff dry fly fishing should prove to be very interesting so get out and enjoy the next several weeks. Cross your fingers for a normal run off with a long and productive fly fishing season and lots of opportunities to catch trout on drys. 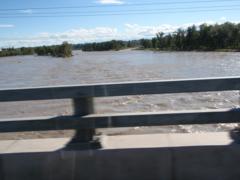