In the salt chuck, chinook and coho are widely accepted as the mainstay of the saltwater salmon fishery. Chinook fishing can be had year round, given the presence of resident fish that live in every harbour, sound and inlet 12 months a year. Resident fish offer anglers a reasonable chance to catch salmon throughout the year, but when it comes to the outstanding salmon fishing many of us dream about, what we’re really interested in is fishing the migratory salmon runs that occur off the BC coast from May through September. This is when schools of chinook and cohos destined for distant rivers come through in such prodigious numbers that the fishing for them can border on the unbelievable. Experience this kind of salmon fishing just once, and when you’re speaking of your tales of salmon utopia, your friends will call you a flat out liar. Such is the price that has to be paid when salmon fishing is that good. 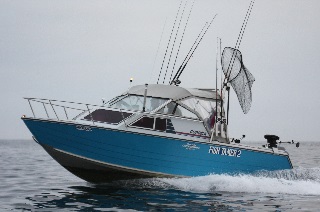 I understand this predicament, and I’ve been there myself. I’ve even been told to my face that I must be exaggerating my stories. “Come on, no one gets that kind of good fishing!” They’d implore. But it is that good. In fact, come July and August, when the coho are running strong I’ve had entire fishing trips where it was nearly impossible to get the downriggers to the deeper water where the chinook hang out, simply because the coho schools, that are typically found shallower, were hammering our lures every time we tried to let them down. “Oh man! It’s just another 10 pound coho!” we’d say, almost in frustration. What a wonderful problem to have. 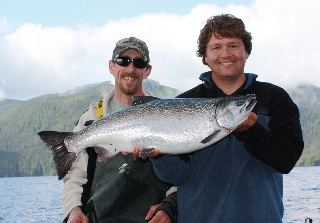 Everyone that fishes the coast often enough will eventually develop a favourite area. Some people love to fish the inside waters, and will do extremely well be it around the central island near Campbell River, up north around Port Hardy, or along the south island, in places like Gabriola Island and Thrasher Rock, where I spent a good deal of my youth. Others go to hallowed grounds, like Rivers Inlets and hook up with great outfitters, like the gang from Legacy Lodge, which I myself did several years back. We spent a few glorious days chasing monster tyee sized chinooks. If you’re looking to catch the biggest of the big salmon, this is the place. 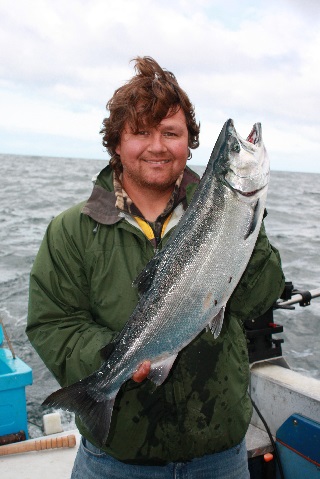 But for a drive to fishing destination, my favourite area is Winter Harbour. Having fished this area for more than a decade, I know the waters, the salmon runs, and what to do when I’m there. Salmon fishing is an art, and there are many, many ways to catch them, which is excellent because if one place or one technique isn’t working, changing up locations or fishing styles is often all that’s needed to put fish in the boat. 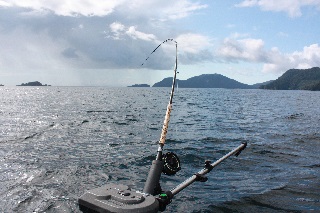 Of all the ways to catch salmon, I’d have to say that the flasher-hootchie combo off a downrigger is a must for anyone who wants to tag fish often. It is a flat out salmon catching machine and it catches chinooks and cohos equally well. The only difference between effectively catching the two salmon species is water depth, and speed. Typically schools of coho swim closer to the surface. For the most part I find most of my coho in the top 60 to 80 feet of water, even though the water could be 200 or more feet deep. I would agree, there are cohos that swim much deeper, but as a general rule, most run close to the surface and that’s where I catch them. Chinook, on the other hand, are deeper dwelling. There are days when I could not touch a chinook unless I was sending that 10 lb cannonball 220 feet down. Most times I find chinook off the waters at Winter Harbour in depths anywhere from 100 to 200 feet. The trick is to run two downriggers and vary the depths until the fish start biting. Put one at 100 feet, another at 140 feet and see what happens. Then try 120 and 160 feet and give it another go. You get the idea. A sounder is handy in these situations. I’d almost say it is essential, just because it will at least identify that I am going over schools of fish that are likely salmon. 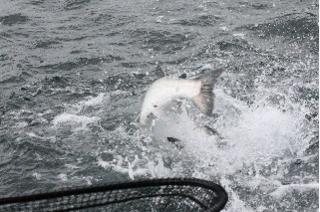 These depths are not set in stone, however. In other places I fish chinook are still deeper than coho, but they may only be 60 or 80 feet down, where the coho will be in the top 40 feet of water. It’s all relative. But one thing that is consistent is lure speed. Coho like it fast, chinooks like it slow and that just seems to be the way it is. So if you’re targeting chinook, fish deeper, go slower and try different depths until the fish tell you what they want. But if it’s coho, pick up the pace and you should do just fine. There is a ton more to this whole saltwater salmon fishing scene. This is barely scratching the surface, but it is the perfect place to start. Learn how to fish a flash-hootchie well and there will always be salmon near and far, willing to bite your line. 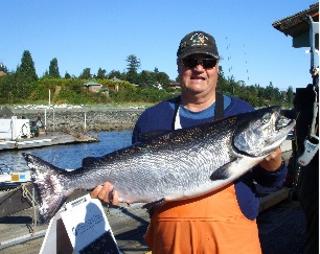