In June of 2013 Southern Alberta suffered one of the largest natural disaster in Canadian history in the form of river and stream flooding never seen before. Once the waters subsided and anglers returned to the rivers and streams they were confronted with changes ranging from minimal to drastic. Rivers and streams had widened in spots, narrowed in others, and in many cases totally changed course. Many waters remained unreachable due to road closures, and if you could get to the stream, getting to the water was a challenge due to log jams. Many anglers simply did not fish thinking that there was no point, certainly the fish would have all been swept away or left stranded on dry land as the streams dropped. Anglers that fished the Bow after the waters subsided in the fall of 2013 knew that the fish were still there in good numbers and were indeed very healthy, but the small stream anglers who fished the Highwood, Livingstone and Oldman area streams were still uncertain of what lay ahead. Anglers were also concerned about the insect life and how the scouring of the river beds and banks would affect the insect populations. 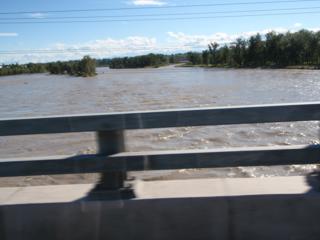 As spring of 2014 arrived it seemed like everyone in Calgary and area were holding their breath, waiting for runoff with fingers crossed. Pre-runoff fishing on the Bow had been good, although access was limited due to the Caresland boat launch being closed and the road to McKinnon Flats being washed out. A very cool and wet spring added to everyone's anxiety, hatches were delayed by weeks and anglers were holding their collective breaths waiting for the snow pack to melt and make its way down the foothills, through the city and out into the prairies. Well runoff came and went at normal or below normal levels, the cool wet spring probably help stretch it out over a longer period of time and everyone could finally exhale. 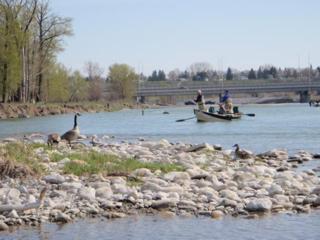 Anglers enjoy an early season float on the Bow

Anglers hit the Bow in numbers and the fishing while ranging from so-so to great, depending on the angler, the day of the week and the stretch of water fished. One thing was for certain the fish were there and healthy, the bugs, while a little late were also present and in good numbers. The stonefly fishing May and June was great and anglers took advantage of great nymph fishing during the day and dry fly action at night and early morning was outstanding. In mid June I was at the boat launch at 5:00 am hoping to catch the last few hours of the spectacular dry fly fishing I had been hearing about. I was feeling pretty smug driving to the launch, thinking that I would be the "early bird that got the worm", well three empty boat trailers, three others launching, and more coming as we launched deflated me a little, but the fishing was good on big dry stoneflies until about 8:oo am and after that we couldn't buy a fish so the early launch was a good idea. With the access at Caresland now open anglers are now able to fish the lower end and reports have been good so far. Lots of bugs and plenty of fish being caught on dries, nymphs and streamers. 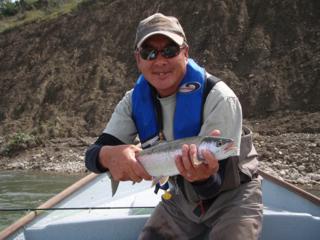 The east slopes streams that southern Alberta fly fishers frequent, the Highwood, Livingstone and Oldman open to fishing on June 16th, but are usually unfishable until late June or early July and 2014 was no exception. My first trip of the season was to the Livingstone, one of the most popular of the east slope streams. The trip was much of what I had expected, some of my favourite runs and pools were the same, many had changed or were gone altogether and there were some new spots full of promise. The big question was were there fish, and how did they fair the flood waters and the changes in their habitat? We caught fish all day, most were in good shape, and the new spots contained fish which had obviously moved from old locals to new in order to survive and carry on. There were sections that needed another year or two of runoff to establish their course, they were braided and spread out over wide flood plains, changed from one channel to four or five small channels too shallow and straight to provide trout habitat. The fish we caught were healthy and we saw several species of insects as well as terrestrials which add to the trout's diet. As with all the streams I fished in 2014 it was amazing to observe where the high water mark was and imagine the water volume that had run through it, hard to believe that anything could survive such an onslaught and survive. 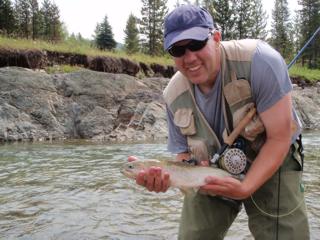 One of my favourite places to fish has always been the Highwood river in Kananskis country, deep corner pools full of cutthroat trout , with the occasional big Bull trout thrown in for excitement. The highway west of Longview runs along the Highwood and many accesses into the canyon section are available to the angler, but the "Billy Goat" required for these sections has long gone from these old bones so I have preferred to travel into K Country and fish the stream in the Cat Creek area. The usual scenario was to park in the Cat Creek day use area, walk twenty minutes by trail upstream and start fishing at what we called the home pool. The Cat Creek day use area was one of many damaged by the flood and has not been repaired so I parked off the Highway and walked in along what was left of the road. The Highwood looked very good right at the day use area so I decided to forgo the usual 20minute hike and start. Getting to the water proved to be more of a challenge than anticipated and I was well upstream of the of the day use area before I even reached the water. Like many other streams the Highwood had changed dramatically, some places for the better, many for the worse. I caught several cutthroats along this stretch, most fat and deathly, and a couple that were a bit on the skinny side. There were plenty of bugs around, Yellow Sally stoneflies, caddis and the odd mayfly along with some flying ants, providing the trout plenty of nourishment. My heart sank when I reached the area just downstream of the home pool, the river was coming in from the left having cut through the trees and upstream where it should have been was a pond of standing water. I walked up to the pool and looked into a dry hole where the pool once was. It was obvious as to why this was a great pool, deep with rock ledges protruding into it, plenty of places for the trout to hide. The river had cut straight through the bush a couple hundred yards upstream instead of making a left. I walked up to where it exited the old channel and followed it downstream, the "new" section of stream lacked much for structure yet, it was mainly straight, deep and fast. Maybe by next year it will have developed into a nice stretch or maybe the river will push some gravel and trees into the corner and once again flow through the home pool. 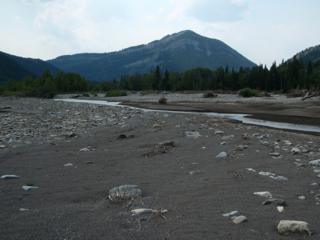 New habitat on the Highwood

Trips to two of my favourite small streams, the Oldman and the Livingstone also had changes, though not as drastic. Some runs and pools had changed or were gone but many remained the same and fishing has been very good this year. The forestry trunk road and some secondary roads leading to it are undergoing repair work still and closures change almost daily, it pays to check before heading out. 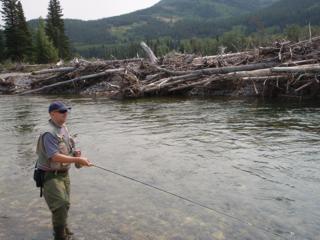 Some areas will take awhile to return to a natural state

Floods affect rivers and streams in many different ways, it will be many years before we know the total affect on the southern Alberta streams. The streambed were scoured clean, perhaps a good thing, the insects seemed to have fared well and are back in good numbers. How badly were the smaller fish affected, was the rainbow spawning that takes place in the spring destroyed? In the meantime it's time to get out and explore and relearn the "new" Bow or your favourite small trout stream. 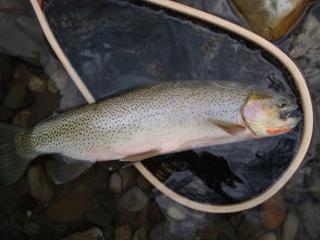 The fish are still there, get out and relearn the trout streams of Alberta