If there is one fishing outing that gives me a great bang for my buck, with minimal investment, it is going down to the river and chasing fall walleye. It’s pretty much a given that this trip will happen, and it will happen often. That’s because for a few minute drive, I can be on the river and have the very real chance of catching a walleye that pushes 30 inches and weighs more than 10 pounds. For many, it would be the walleye of a lifetime and this past fall, this very walleye happened to me on the North Saskatchewan River, within the Edmonton City limits. 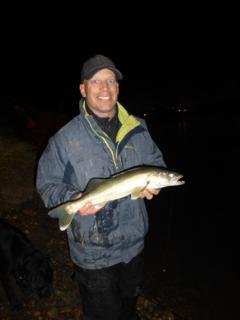 On that particular evening we already had a great outing going. We’d tagged a number of 2 to 4 pound fish, and one that was approaching six. This would be a considered a normal, but good fall night. While the fishing was good, we were getting ready to call it a night when I said the famous line, let me just catch one more fish. It’s a slightly modified take on the ever famous, “One last cast” speech almost universally applied by anglers near and far. I wasn’t quite ready to call the evening quits. Not yet. So when I felt the familiar tap tap of a walleye picking up my bait, I smiled and set the hook, knowing I was about to catch my last fish of the night. I wasn’t quite expecting what was to happen next. 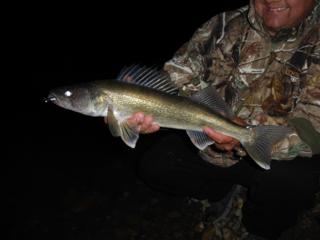 Rather than the usual stuggle to shake free, this fish simply moved away, with very little shaking. The rod just arced a big deep bend and stayed there, pointing directly down and to the water. I instantly knew this was a big fish. I kept applying tension and it had little effect in pulling the fish up. Instead the unseen giant did laps, swimming around the pool, hanging around bottom too deep for me to see. I was excited, and curious. If this was a walleye, it was a tank, but it could just as easily be a big pike, or even a sturgeon that wandered into the pool. Who knew what it was, but it was exciting! A few minutes passed and finally the fish started to give and come up. I got a glimpse, and saw it was a huge walleye! We didn’t have a net to scoop it up, so I walked to a relatively shallow shore and eventually pulled the fish up onto the beach. 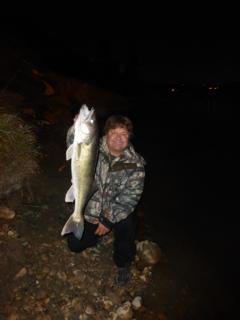 It was everything I could have wanted. A quick measure put the fish over 31 inches and we conservatively estimated the walleye at over ten pounds. It was my biggest fish on the river. I hope to repeat that this coming fall, or perhaps catch one even bigger. The potential is there, and over the years my friends and I have literally caught dozens of big, fall, river tanks. This beast was my biggest. 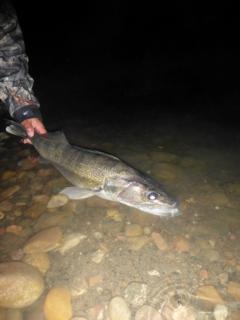 When fishing in the city, I find that if I wait until the sun goes down, my odds of catching a big walleye go up even further. That’s because there are fewer people on the water, and also the fish feel more secure under the cover of darkness, and will come to the very edges of the shore to feed.

There are two schools of thought when it comes to catching big fall walleye on the river. The first is these fish are really turned on to eating fish, so tossing out fish imitating plugs, spoons, and spinners will get a lot of them to bite. This is true, and I can attest to one evening where all I tossed was a Rapala blue gold, Husky Jerk. It was one of the very best evenings I ever had, and I never caught so many big walleye in one session. In fact, I tagged a half dozen fish over 26 inches, plus many more that were smaller. The two largest were twin 29 inchers.

The second way to catch them is by bait. Some days the walleye are turned on and practically anything thrown in the river will generate a strike, but other times it’ll take natural bait before a walleye will commit. And while the general thought would be that minnows would be the best bait for fish eating walleye, surprisingly I’d says that worms actually out produce the minnows on most outing, at least on the holes I fish. For bait, I like to get it down and keep it near bottom. I do this mostly by either tipping a light jig with a worm, or I’ll simply toss a minnow or worm off a hook and split shot and let the works rest on the bottom. This set up has caught me more fish than I can count. 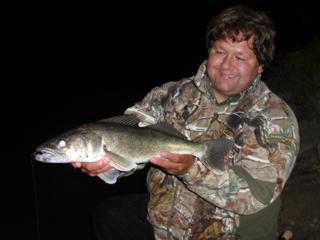 I have to say, the prairie rivers come October are the place to be. The walleye will be stacked, they will be large, and more times than not they will be eager to feed. And even though, as I write this article it’s not quite October, I’m gonna head down to the river this evening and toss a line in, because you just never know…