Deep In The Heart Of Texas

Angling during the ice months – especially in the western Canadian provinces beyond the Chinook zone – is always going to be a test of strengths, a clash of wills and an intestinal fortitude gut check.

Many of us embrace the cold weather challenge and defy our climate willingly.

But for others the default position is to hang up their rods, tie flies or simply hunker down and pray that spring comes early for a change.

It’s just too C-O-L-D to think of fishing.

Of course, there’s a way of resolving that problem, take a break from the weather, and partake in some quality fishing at the same time.

And that’s to fly south. 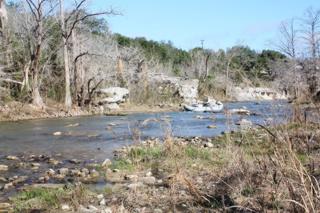 As I did last March when I spent a mercurial two weeks of honky-tonks, barbecue and a sampling of the fine flyrodding that the Lone Star State has to offer – deep in the heart of Texas. Texas, of course, is renowned for large, shiny boats, logoed-up anglers and big-buck largemouth bass tournaments. Nothing wrong with that as I’m also a big bucket-mouth fan but I chose a different route to Lone Star angling redemption and that started with rainbow trout.

The “Guad”, as they sometimes call it, gains its water and its strength from the numerous springs that come bubbling out of the limestone that underlies that rolling piece of picturesque central Texas countryside between Austin and San Antonio known as the Hill Country. The source is the magnificent Edwards Aquifer.

It doesn’t really become a trout stream until it experiences the water-cooling effects of the Canyon Lake Dam, constructed by the US Corps of Army Engineers in 1964 as a flood control project. The Corps was the subject of a lawsuit by the Guadalupe River Trout Unlimited Chapter which successfully forced the government agency to maintain minimum cold water flows during the scorching Texas summer months. Thus, the best little trout stream in Texas was born. (It’s also the only one.)

Each year the TU chapter and the Texas Parks and Wildlife Department stock 30,000 rainbows into the pools and riffles in the trout zone that extends almost to the city of New Braunfels. Because this is Texas, where everything is big, these stockers – of which they estimate about a third carry over – are up to 18 inches when they are first put in. 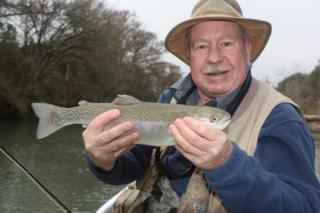 I was about to enjoy the whole experience when Texas river guide Brent Hodges launched his rubber raft at the top River Road crossing and anchored up in the first pool in as wild section of the river called the Horseshoe Loop.

I was armed with a San Juan Worm with a Loop-wing Blue Wing Olive as a strike indicator. On the first cast the bobber dipped, I set the hook and a feisty rainbow was attached to my line. After a fine fight, the fish – for reasons known only to the angling gods – spat the hook before Brent could slide his net under it.

We drifted down the river, taking fish reasonably consistently. Unfortunately, the sunny sky obliterated the Trico Mayfly hatch that appeared to building as we were getting the rods ready at the bridge. We set up using a variety of nymphs - some standards, others peculiar to the Guadalupe like the Rainbow Warrior and Crystal Meth.

I was fishing during blue bonnet season, when this iconic little lupine that crowds the highway ditches and pastures signals the arrival of the Texas spring. The river actually fishes well throughout the winter beginning in January when the first stockings occur.

The weather was warm and spring-like but don’t expect it to be blistering hot like Mexican or Caribbean destination angling.

There is no historic district or heritage courthouse square in this little Gulf Coast fishing community east of Corpus Christi. When 42 full-blown hurricanes have come roaring ashore within a 30-mile radius over the last 150 years there’s fat chance of that.

But there are barrier islands thrown up by the big winds and pounding surf. Behind them is a matrix of bays, creeks, bayous, channels, mangrove jungles and sandy spits that collectively constitute that quixotic angling environment known as “flats”. 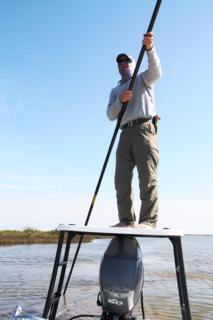 This is my next stop on Brent Hodges’ angling adventure tour.

While the Guadalupe can be fished successfully by a visiting angler with a fundamental knowledge of trout angling (although the Texas stream access regs can be complex) Port O’Connor is a different kettle of fish.

Flats fishing involves team work, an experienced pair of angler eyes and a fast moving skiff. Brent provided the last two prerequisites and I was tasked with the first.

While there are a variety of game fish that inhabit these areas at different times of the year (including an interesting tarpon season) Brent’s target species is a large rosy-hued fish with a loonie-sized black spot on its tail called a Texas redfish.

Flats angling is more hunting than fishing – where Capt. Brent assumes the command position on the poling platform above the outboard and the angler, armed with an 8-weight flyrod, waits on the casting deck poised for Hodges to call the “shot.”

When the guide spots a cruising redfish, he positions the boat to intercept its line of travel, then calls on the cast.

After a few false starts and miss hits, we’re half way across a piece of water called Mud Flat when Brent sees another cruiser. I place the Simple Shrimp fly in front of it, strip when the guide gives the order and the redfish is on 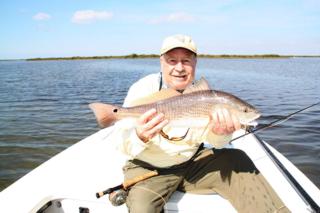 It then rips across the bay when I set the hook.

A lot of tension and anxiety followed. But eventually the spine of my big fish rod tired the red and it slipped into the guide’s net for a couple of quick pictures and a release.

Despite testy conditions when we lost the light following a front that blew in and the fish got moody, it was a fine flats day.

The day ended in a spectacular break-off when my fly line wrapped around the reel handle during a big redfish’s surging run.

The third leg of my Texas fly-fishing adventure took me deep into the West Texas semi-desert called the Staked Plain.

This is a land of mesquite brush, prickly-pear cactus and not much else.

Where Geronimo used to roam and now the Border Patrol is the largest single employer. It’s a miracle there is any flowing water at all in this parched land. Let alone a crystal clear stream that meanders through mellow limestone bluffs and over precipitous falls called the Devils River. 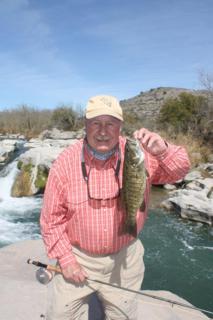 I’ve travelled to this remote part of Texas close to the Mexican border to test my skills against the Devils’ smallmouth bass population.

Brent rows the rubber raft up the Del Norte Drift while I probe the limestone overhangs with a crayfish imitation called the Devils River Craw.

The fishing is slow until we hit a backwater with a bubbling spring at the top end. Here the bass are holding in holes in the grass and I hook a few small ones despite the tough casting conditions.

After lunch we hike down to Dolan Falls where the sallies are staging in the rocks below the drop.

I get a lot of follows but no hook-ups until I drop the fly into an eddy and entice a bass to take the bait. After a powerful fight the guide nets my first Texas smallmouth. 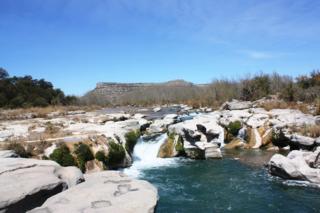 Dolan Falls on the Devils River