Chicken Of The Sea

Throughout my life I have vacationed on Vancouver Island, and for a couple years I lived on the island, in Port Hardy. All the while I was there, fishing was a big part of my life, as it is today. I had unlimited access to a row boat and was let loose and allowed to catch all the fish I possibly could. I’d paddle that boat everywhere, sometimes several kilometers in search of my prey. My favourite fishing was for cod and other bottom fish. They were reliable, could be counted on to bite most anything, most anytime and they were very tasty! They were the chicken of the sea, and could be counted on to deliver good action and good eating most every time I ventured out.

In my years of chasing them I figured out that the big sandy flats that I could row to, were full of flatfish. Most of these were flounders but when I fished over rocky areas, the action really heated up. This was especially so where there was current present. Every manner of bottom fish lived in the rocks, and dropping a jig with or without bait was an excellent way to catch them. I caught rockfish, ling cod, kelp greenling, and on occasion, red snapper. I figured using herring as bait would improve my fishing even more, but I quickly found out that all it took was one peck by a fish at 200 feet, and I’d have to reel my hook all the way back up to check that bait. While it did improve, herring were impractical. 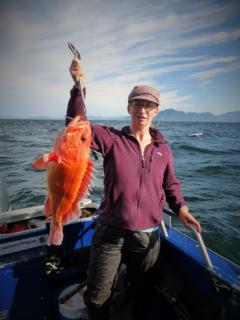 For a good long while I stuck with traditional saltwater jigs, my favourites being the Sting Zelda, the Swedish jig, the Rip Tide and the Buzz Bomb. These are still good jigging lures, but with their hooks placed right at the bottom of the lure, they were prone to hanging up in the rocks occasionally. There had to be a better way, and there was. Now-a-days I use big rubber tail jigs, Mudrakers, spreader bars and, of all things, a chunk of copper pipe filled with lead. The key to the first three, is that there is scent associated with them.

The big rubber curly tail is made by PowerBait, and I stick it on an 8 ounce jig head. That gets me down to the bottom and into the fish. The scent released from the PowerBait curly tail is more than any self-respecting cod can take. I call this jig ling cod candy. Mudrackers look like a chrome pipe with a hula skirt hanging off the top side with a treble hook attached. There is a chamber where liquid scent can be squeezed into. The scent attracts all manner of bottom fish. The spreader bar is a bait set up. There is a longish lead weight attached to the short arm to send it to the bottom, and typically a circle hook placed on a short stout line off the long arm. While herring is tasty to all gamefish that swim, it is not durable. My recommendation is to go catch yourself a salmon or two and cut out that belly skin for bait and eat the rest. Fish love the belly skin, plus it’s durable, so using it for bait makes total sense. 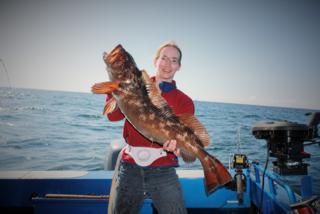 Now for every idea, there is an exception to the rule and the exception to this rule of scented or baited lures is a crazy home-made copper pipe filled with lead. A hole is drilled through the middle of it and a large treble hook is attached off the side. On the top a super thick cotter pin is set for the line attachment. It’s a crazy looking contraption, unscented, but it catches fish like stink! I can’t explain why it’s such a fish catching machine, but it is, and I suggest you try it.

The best places to fish these contraptions is around underwater humps and in and around rock. That’s because most fish like to hide in the rocks and this is especially true with Ling cod and red snapper who, like all bottom fish, are greedy. If I can get a hook to them, I will normally catch them. While I can occasionally have success from the shore, I find it’s far better fishing from a boat. When you get to a promising looking spot, motor to the upwind side of the area and jig while drifting through the zone. If tides are having more effect than the wind, I motor into the tide and let the current drift me through the zone. 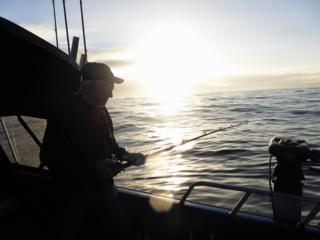 A stout rod with no-stretch braid or Tuf-Line is a great match for jigging for cod. This outfit is very effective for pulling in a big cod, or possibly a bonus halibut out from the rocks. Anything less and it is my prize will likely dart right back into the rocks from where he came. It then becomes a real challenge to get them out. Ling cod, snapper and rockfish, are not highly celebrated in comparison to, say, salmon, however, they are very tasty, and rarely have they ever disappointed. They are, the chicken of the sea. 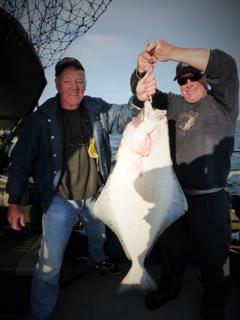