About a dozen or so years ago things changed. I moved to Calgary and Stauffer Creek, the little jewel of a spring creek that I considered my "home water" when I lived in Edmonton, stopped being the focus of my fly fishing addiction. With so many other waters at my doorstep, not the least of which the world famous Bow River, but also many smaller waters much closer to home that offered some very good small stream angling opportunities. The Sheep, Highwood, Livingstone, Oldman and their tributaries were all as close or closer to my new home in Calgary than Stauffer Creek was to Edmonton. The Crowsnest River was also three hours closer, not to mention all of the water south of Highway 3 and across the border into B.C. Other small stream brown trout opportunities were also now in reach, and begged to be explored. The Little Red Deer River, Fallentimber, Dogpound and Burnt Timber Creeks all were closer than Stauffer and received some of my attention.

The challenges of fishing a small, willow choked spring creek that contained skittish brown trout proved to be valuable lessons when I moved south. While very few other streams I have fished have the amount of overhanging brush, undercut banks, widely variable depths and spooky trout that Stauffer has, the following tactics used to fish it have served me well. 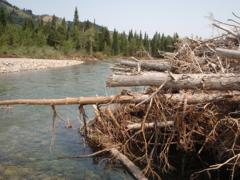 Plan your approach, trout face into the current and therefore should be approached from behind most of the time. This being said there are situations where an approach from beside or above can be advantageous. Trout that are very leader shy can often be fooled by approaching them from upstream. This lets the fly arrive before the leader and tippet and avoids the chance of "lining" the trout. There are a few things to remember with this downstream method. Keep a low profile, when above the fish you lose the "blind spot" advantage that you get with an upstream approach. Cast well above the fish and feed the line down to it, always let the fly get well past the fish before any drag occurs, skate it off to the side and strip in the line so that your next cast is once again well above the fish. Keep your false casts to a minimum, the chances of spooking the fish increase every time you wave your rod and line back and forth. Your first false cast will tend to spray water so always make it off to the side and not over your target. When approaching a feeding fish or likely looking "hidey" hole wade slowly and carefully, sound travels very well underwater, keep the noise to a minimum and make sure not to push a wake of water in front of you. 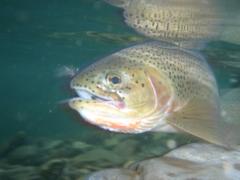 When blind fishing your way up a stream always make several casts to areas where you really don't think the fish will be, any fish in these areas will usually be smaller fish but if you spook them they will usually dart up into the prime spot you were eyeballing and spook any trout in that area, we call these sentry fish. This is not only true for small streams but streams and rivers of all sizes. I've witnessed many times anglers wading into the Bow to start nymphing a run and just about stepping on a fish laying in 6" of water. This often happens early in the morning when the fish have not yet been disturbed from their night time feeding in the shallows. 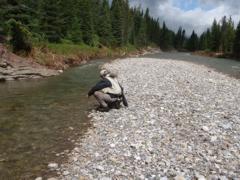 In the early morning watch for fish feeding in the shallows

Plan your cast, including your backcast, to not only avoid bushes but to deliver the fly so that it’s drift takes it over the fish, or fishy looking spot, with as little of the leader as possible passing over the targets head. Many times just moving slightly off to the side will give an angle that will accomplish this. Casting from this angle can also help avoid drag, an upstream mend as the fly is delivered will give you a longer drag free drift. A serpentine cast, where the angler waggles his rod back and forth on the cast, will put a series of "esses" into the line which will also allow your fly a drag free drift. If at all possible keep your backcast over the water to avoid confrontations with the streamside vegetation. Always try and be aware of what's behind you, it can save you spending valuable fishing time untangling from fly grabbing willows. If back cast room is not possible then use a roll cast, this cast lets you deliver the fly without having a back cast. 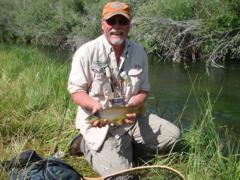 Nymphing on Stauffer Creek was always a challenge due to the large variances in depth, runs that are only inches deep dump into small corner pools that can be ten feet or more deep, and then exit into another run with deep undercut banks with overhanging vegetation. With the gin clear water and spooky brown trout, large indicators such as corkies or "Thingamabobbers" are not practical. The set-up I use when shallow water nymphing has the nymphs attached to a couple of feet of Fluorocarbon tippet, at the knot which joins the tippet to the leader a small tuff of antron yarn is attached as an indicator. I use white yarn as it looks like the foam that is found on most streams and is much more natural than bright orange or chartreuse. Fluorocarbon is an excellent tippet material for nymphing as it is invisible and it sinks, both good attributes for nymphing. By fishing the nymph on a short tippet you will avoid hanging up in the shallower waters and often trout will feel more comfortable coming up to a subsurface fly from the depths of the pools than they would to a dry fly on the surface. 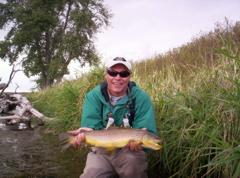 Another method that I used a lot on Stauffer has worked well on many smaller streams is a tight line technique similar to Czech nymphing, but done strictly upstream. This method works well wherever you're faced with undercut banks or overhanging vegetation that guards a deeper section of water. In this method the fly, either a nymph or a small streamer, is cast upstream and as close to the bank or overhead cover as possible. The angler then strips line to keep in touch with the fly, keeping the fly moving at the same speed or slightly faster than the current. Fish seeing this food item moving past them and will often come out from under cover to chase and eat it.

Another tactic I picked up on my new home waters of southern Alberta is that I always carry a couple of sinking leaders with me. These leaders come in several different lengths and sink rates, take up very little room and easily convert your fly line from a floating line to a sink tip very quickly and easily. Quite often on streams such as the Highwood an afternoon of dry fly fishing for cutthroats, can be supplemented by trying for some large bull trout laying at the bottom of a deep pool. Simply loop to loop a sinking leader on, attach a large streamer and see if you can entice a large bully to chase and eat it.

Tactics learned from your home streams are transferable to all trout streams regardless of size. Tactics and tricks used on the Bow can often be used on smaller streams, such as the Crowsnest and vice versa. Quite often you'll employ the tricks and tactics without even thinking about them, we are always learning new tricks and tactics as fly fishers and that's part of what makes it a great sport.