If there’s anything more iconically all-Canadian than maple syrup, mosquitoes or even the hockey sweater, it has to been the fly-in northern fishing trip. The sweet stench of aviation fuel, the seductive sizzle of fish fillets in a shore-lunch skillet or the haunting mid-night twilight call of a lonesome loon, they are all pieces of our outdoors heritage puzzle and the mental make-up of Canadian Man (and Woman). The idea of piling into a flimsy bush plane and heading out into the Great Canadian North’s wild blue yonder is a life-changing experience that few folks in other parts of the world are lucky enough to experience. And if the point of departure is Yellowknife, Northwest Territories historic Back Bay and the aircraft is a legendary de Havilland Beaver, then the trip becomes truly epic. As was the week I spent exploring the Territory with one overriding mission in mind. I wanted to catch Northwest Territories top four game fish armed only with a fly rod. 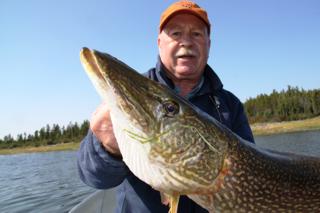 Great Slave Lake’s Yellowknife Bay is a maelstrom but Northwest Territories guide Carlos Gonzales is resolute. He guns the 90-horse Yamaha and soon Yellowknife’s Old Town is disappearing rapidly in the rearview mirror. We smash through the rollers and head down the North Arm until we find some softer water behind an archipelago of sheltering islands. The relief couldn’t come soon enough. 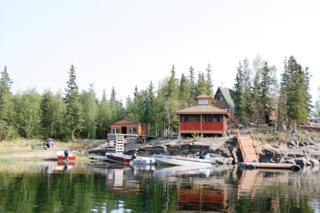 Carlos cuts the engine in front of a granite wall and tosses out the anchor. "Do you have anything in black," he asks. "The pike are eating the burbot." I pluck a black and purple Lefty’s Deceiver from my fly box and hold it up proudly. Carlos fishes something from his gear that resembles a road-killed squirrel. "Too small," he sniffs, about my hand-tied creation, but I stick to my guns and when I cast the Deceiver tight to the rocks, let it sink for a spell, then begin bringing it back in a jerk-jerk-pause retrieve, something smashes it. I set the hook "although I probably didn’t need to" and the fight is cunning and violent. When it finally succumbs to the spine of my 8-weight fly rod, Carlos whips the fish out of the water with a flourish that reveals his proud Basque heritage. It’s a beautiful Slave Lake pike " green, glistening and pushing 30 inches. I’m impressed. "Little guy," scoffs Carlos and releases the pike back into the big lake.

The Slave Lake gold standard is apparently 40-inches and up. A fish as long as your arm apparently doesn’t cut it up here. Carlos hauls up the anchor and we chug to another set up. And so it goes for the rest of the day. I finally do hook a true 40-incher, plus a dozen more Great Slave Lake predators before we head home across the troubled bay. Pike on a fly, one down and three to go.

At a float base in Yellowknife’s history-steeped Old Town, a de Havilland Beaver is tethered to the dock. Not a "true" King of the Bush Planes, this one is fitted with a turbo-prop and not a classic Pratt and Whitney "Wasp" engine, but a Beaver none-the-less. When the gear and lodge supplies are stowed we cruise over the head frame of the worked-out Giant gold mine then bank for Gordon Gin’s Yellow Dog Lodge at the junction of Graham and Duncan Lakes.

Here I hope to complete the unfulfilled part of my North-of-60 Fly Rod Grand Slam. In the world of destination fishing, the noun "lodge" can convey many meanings, " anything from five-star accommodation to a rough cluster of plywood cabins strung along a breezy headland. Yellow Dog fits sublimely somewhere in the middle.

Next morning Yellow Dog guide Garrett Fyfe and I venture out onto the mirror-flat surface of Duncan Lake. Our target species is Duncan’s prolific lake trout population. Using a "cannon-ball" downrigger we quickly find them and begin boating lakers in the 5 to 10-pound range. Unfortunately they are holding along the thermocline at about 40 feet foraging for Cisco’s, putting them out of range for my fly rod, even when loaded with a sinking line. But in the afternoon when the sun comes out and the pike migrate to the shallows to soak up the rays we have sensational sight-fishing with my fly rod. Presenting the big flies before the basking bad boys, then giving the lures a quick twitch. The takes are explosive and the pike depart like bonefish in the skinny water.

One portage and two canoe-paddling sessions up the McRae River and we arrive at a pretty little cataract called Teed Falls. Armed with my four-piece, 5-weight trout rod, I’ve come to the holding water below the falls to angle for the third species in the Northwest Territories Big Four. Not trout as the light tackle might suggest but the North’s great fly-eater, the mercurial Arctic grayling.

Where the river slows and drops into a mysterious green pool I cast a black Woolly Bugger at the head and let it swing with the current. Nothing, so I cast again with the same disappointing outcome. On the third pass as soon as the current grabs it, and the fly begins to swing, I give the Bugger a slight seductive twitch. A pewter-hued fish rises from somewhere in the rocky rubble and slams the fly. Fish on. After much head shaking and a couple of escape attempts a grayling measuring an honest 14 inches slides reluctantly into my trout net. 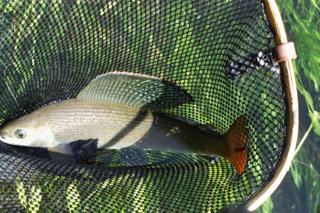 Arctic Grayling in the net

Many more would follow that afternoon before returning for steaks and a soak in the wood-fired hot tub back at the lodge. Two down and two more to go.

A bush plane on floats buzzes the lodge, goes into a 180 degree banked-turn over Graham Lake’s home bay, splashes down, and then taxis to the dock. Not a Beaver but a more modest Cessna which will be our transport for the short hop to Johnston Lake which is Yellow Dog’s walleye outpost.

The wind is not our friend, but when Gordon Gin gets the outboard we brought with us on the aircraft, attached to the aluminum skiff that is cached high on a rocky outcrop, we venture out on Johnston’s choppy surface. In the big blow all my fly rod produces at first are a few small pike. And so it goes for a while until we approach a rock ridge that strikes out into the lake, and then disappears. When the wind blows us over the structure the orange jig that Gin is fishing abruptly stops, it’s not a hang-up in the rocks because this rock is fighting back. After the walleye comes aboard I cast a red and yellow Deceiver along the drop off, give it enough time to sink into the strike zone and begin a slow, tantalizing retrieve. The voracious walleye never lets it get back to the boat. Action continues until the buzz of an approaching bush plane signals our departure.

The last chance search for the fourth and final illusive leg of my fly rod Grand Slam leads to Finger Bay, a Pre-Cambrian Shield slash in Graham Lake where lake trout are said to lurk in the evening twilight. The only problem is, the bay is 80-feet deep and the lakers are down almost that far. A white jig is the lure of choice and begins producing fish for our party almost immediately, but not for me. I lower a white and chartreuse Deceiver over the gunwale and pull sinking fly line from my fly reel almost to the backing. Of course there is no way to set an anchor in water that deep so holding the boat over target is inevitably a problem. But when the breeze settles and the boat is temporarily static, I begin jigging the fly. I feel the tug and set the hook. Laker on. Mission accomplished. 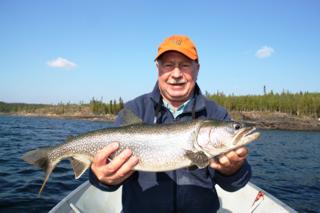