There has always been the question discussed amongst fly anglers, if they could have only one fly to use, what would it be? It's pretty tough to narrow the choice down to one fly, and thankfully we don't have to but it's always a fun discussion. There are many variables that would dictate the perfect fly be it lake, river or stream, rainbow, brown, cutthroat or brookie, spring, summer, fall or winter? In Jackson Hole, Wyoming they have a "One Fly" contest every fall to raise money for Trout Unlimited. Teams of anglers from all over the world come to try and pick the one fly that will fool the most fish and win them the event. If you look at the list of winning flies over the years you'll see a wide variety of patterns, from small tungsten nymphs to large double bunny streamers, small rusty spinner dries to large foam creations and even the good ole San Juan Worm won it one year! There are far too many things that dictate which fly will work on any given day, not the least of which is the angler’s confidence in their choice. While choosing only one fly is a bit unrealistic, ten patterns that I wouldn't want to be without is a little more reasonable. Naturally this selection is going to be different for every angler based on location, species, and water type fished. A fly fisher that fishes mainly lakes is going to choose different flies than one that fishes moving water, one that pursues cutthroats will probably choose more dry flies over the angler that fishes browns or bull trout. So here's my top ten list for the fly fisher in moving waters in western Canada and the US. 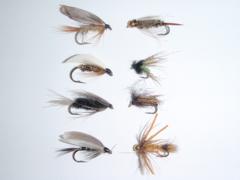 Some of my personal favorites

The Adams has been a long time favourite of many anglers, it's name refers more to the colour, and buggy looking shade of grey, than the actual pattern. The fly design is what I would call a traditional dry fly pattern, similar in design to Cahill's, Hendrickson's, Quill Gordon's and more, all similar ties just using different materials. The parachute style of this fly wraps the hackle parallel to the shaft of the hook which allows the fly to ride low on the water and allows the fish to get a good view of it. The wing post is usually white but can be any number of colours including Hi-Vis , making it easy for the angler to spot. It can be tied very small to imitate a Blue Wing Olive mayfly or very large to represent a Green Drake mayfly and everything in between.

No angler who fishes western waters, whether they be lakes or streams, should ever be without an assortment of Elk hair caddis. Caddis are one of the west's most prolific insect hatches, they come in numerous sizes and colours, live in both moving and stillwater and are available from spring through fall. They are very active insects that often "skitter" across the water surface, making them a lot easier for the angler to imitate, no drag free floats necessary here. In lakes caddis are often called sedges and can get very large. They are one of the "toughest" insects and can tolerate less oxygen in the waters they inhabit and therefore are very prolific in many western waters.

Stimulators, while similar in style to the Elk Hair caddis have always been one of my favourite searching patterns. They look a little bit like a lot of things, caddis, stonefly and grasshopper to name a few and can bring fish to the surface when there is nothing hatching. In larger sizes they can be used as the dry fly in a dry/dropper combination.

Ants are, in my opinion, one of the most under used fly patterns. Ants are available year round and trout recognize them as an easy treat. While not an aquatic insect they find their way into the water like other terrestrials such as grasshoppers and beetles. Once on trapped waters surface they are easy pickings for trout and whitefish. A quick look at bank side vegetation and old logs and stumps will almost always have ants present.

Underside of a Mayfly

Anyone who has fished Montana's famed Missouri River has probably used, with great success, a nymph called a Lightning Bug. I have great success with it in many western streams and rivers, and it is especially productive in waters that contain Baetis mayflies, often called Blue Winged Olives. Many rivers, such as the Bow, have two hatches of Blue Wings, one in the spring and another in the fall, making the nymphs available year round. This nymph has a little bit of flash in it and is one of the best mayfly nymph imitations I have found.

There's something about a Prince nymph that makes it a very successful nymph, I think it looks al lot like both a mayfly nymph and a caddis nymph, due to the white "horns" found on it. It is a staple on my two fly nymph rigs. It also seems to be a whitefish magnet so if the trout aren't biting, running this nymph through deep runs can provide some action on whitefish.

Many anglers shun the San Juan Worm, but it is as much a trout food imitation as any other nymph. Most trout streams have populations of aquatic worms and this is what these flies represent, not "garden hackle" as some anglers believe. Named after the San Juan River in New Mexico where the pattern was invented this fly has probably caught more trout on western rivers than any other. It's a rare day when the San Juan Worm doesn't catch fish.

Every fly angler, young or old, newbie or veteran has heard of, and probably fished the woolly bugger, or one of the many variations of it. It's a simple yet versatile pattern that can be fished dead drift, swung on a tight line, or actively retrieved. The turkey marabou tail and palmered hackle make this fly move in the water and can imitate leeches, minnows, stonefly nymphs, crayfish and other assorted trout foods. It is tied in a variety of sizes and colours and has many variations, such as the Bow River Bugger. As a bonus it is a very quick and easy fly to tie for those who like to tie their own.

The double bunny, as the name implies, is a large streamer tied with two rabbit strips glue together. The rabbit soaks up water and sinks fast and it moves very naturally in the water. By using different colours of strips a very realistic minnow pattern is created. The double bunny is a great choice for large trout, including bull trout and also works well as a fly for pike.

This "old" pattern may seem like an odd choice, and truth be told I don't use it near as much as I use to. The muddler caught me one of my very first large trout many years ago and I always have one or two in my fly box. Designed as a minnow imitation this fly can also be dressed with floatant and used as a grasshopper imitation. 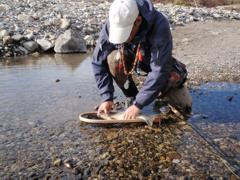 With so many fly patterns out there it is extremely difficult to pick just ten. Many traditional patterns like Pheasant Tail nymphs, Zug Bugs and Quill Gordon's still work today and some of the newer patterns that have came along using more synthetic materials such as foam have made it possible to have a fly float all day long with very little effort. Articulated shank flies look and move like real minnows. Now UV materials are all the buzz and I'm sure many of these patterns will emerge as great ones, but for now if I had to pick my ten flies to be stuck on a desert island with I'll stick with my list above, as long as my island has a trout stream on it.