The June morning broke with much anticipation and promise at the Village of Wabamun ramp. The big lake west of Edmonton was a mile-wide mirror; the bright late-spring sun was climbing in the sky and the air warm and mellow. A perfect day for fly rods and toothy critters. 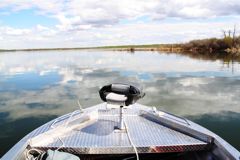 My fishing partner Emmerson Dober gently eased his boat trailer down the launch, released the Explorer jet boat from its stays and we were off, cruising across Wabamun’s immaculate surface to the Paul Band First Nation shore where there is a considerable expanse of what’s best described as "Pike Country". Back in 2006 Lake Wabamun was anything but pristine after a Canadian National Railway’s freight train derailed west of the village dumping 800,000 litres of bunker fuel and toxic pole oil into the lake. Health authorities immediately slapped on a consumption order and fish and wildlife officials followed later with a harvest ban. While nobody would wish for a catastrophic event like the 2006 wreck, sometimes the outcome can be more positive than negative. This lake that had previously been an average to middling cottage lake under considerable industrial and residential pressure has since been managed strictly as a catch and release fishery. 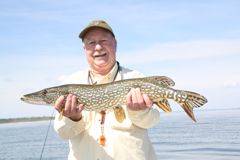 The effect it has had on the pike population generally "and the size of the fish in particular" is nothing short of amazing. Anglers can now expect to catch trophy fish in the 30-plus-inch size range and have days when the number of pike boated approaches triple figures. This, all within an hour’s drive of a million people.

When we approached the First Nation shore Emmerson throttled back the jet and we cruised slowly across the little bay with one eye on the boat’s depth finder and the other in the water passing slowly below. When the sonar read about 8 feet of water and we found the edge of the pencil reeds, Emmerson cut the engine and let the anchor slip overboard. We had arrived.

Pike have voracious appetites, especially when they are in post-spawn recovery mode, and patrol the shallows feeding aggressively on minnows. The primary challenge for a toothy critter fly angler is basically to present them with something they want and hang on. In this case it was a large Lefty’s Deceiver streamer fly in chartreuse and white that did the trick. There are, however, many effective pike flies on the market and the selection available increases exponentially if you are able to tie your own. The Deceiver, which was originally conceived by salt water fly angler, Lefty Kreh, as a striped bass lure, has a unique movement provided by its saddle hackle tail. This is composed of two, three-feather groupings each which are tied onto the hook shaft so the natural curve of the hackle faces out. These feathers compress and expand as the fly is stripped through the water. The pulsing motion drives the pike nuts. 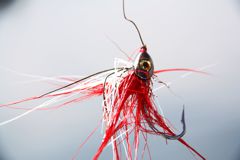 The original Deceivers were tied in whites, pinks and tans to imitate ocean forage but I’ve adapted my Deceivers to encompass the highly successful colour combinations created by Lacombe’s legendary pike lure maker Len Thompson. My toothy critter fly box now contains flies in chartreuse and white, red and white, silver doctor blue and white, black and olive, purple and black and, of course no pike fly selection would be complete without a "five o’ diamonds" combo of red and yellow. I mostly tie my pike flies on 0/1 saltwater hooks and have incorporated a weighted minnow head into the tie. As well as the pumping motion of the tail, this also gives the fly a tantalizing jigging effect when brought back in a strip-strip-pause retrieve.

Our weapons of choice were 8-weight fly rods equipped with fighting butts and outfitted with rugged game-fish reels with adjustable drags. Mine had a medium sink line and a short leader with a heavy butt and a 0X middle section. The stout butt is crucial in getting the big fly to turn over at the end of the forward cast while the 12-pound mid-section allows for an easier break off if the fly gets hung up on bottom debris. The most important part of the terminal rig is a foot or so of coated wire shock tippet without which pike angling quickly becomes a frustrating succession of lost flies. and fish. Most of the leading manufacturers produce commercially tied tapered pike leaders or you can assemble the components and construct your own with surgeon’s knots. A three or four wrap clinch knot will hold the fly firmly to the shock tippet even after many toothy critter encounters. The 8-weight fly rods are also helpful in casting the heavy, air-resistant flies.

When the boat had swung around and settled, we pulled a workable amount of line off the reels and got to work. Double-haul casting, where the angler increases the line speed by imparting a sharp tug on the line during both the forward and back casts can increase your range greatly, as well as, shooting several more metres of line. You must, however, be careful where you place your feet and remove as many objects as possible that your fly line can tangle on. This is especially true on windy days when a few coils of fly line can find lots of objects to wrap around. I cast out, let the fly find the bottom, and then begin bringing it back in a combination of strips and pauses. On this occasion the Deceiver never made it back to the boat, it had been very aggressively grabbed by something during one of my strike-inducing pauses. The pike wasn’t the biggest Lake Wabamun specimen but feisty none the less.

Two pieces of toothy critter angling equipment that you must have are a set of jaw spreaders and hook-extraction pliers. Most fly-rod caught pike are hooked high in the mouth and can be released with the minimum amount of damage and stress, particularly if you pinch your barbs and are very conscious about carefully extracting the hook rather than ripping and tugging. Being able to efficiently and safely release a fish in today’s modern, progressive angling context ranks right up there with casting and lure selection skills. Occasionally one will take the fly deep, which requires some radical surgery on a fish whose aggressive defence mechanism is to clamp its jaws shut on anything that approaches it. A jaw spreading device eliminates a lot of frustration, allows for a quicker and safer release as well as being an effective antidote against hamburger hand, the occupational hazard generally associated with toothy critter angling.

Emmerson was soon into his first fish and after that the pike kept coming all day, including several in the "trophy" class which all required a degree of brute force and predator cunning to subdue them. Most pike can be safely handled by grasping them from the back where the gill cover meets the fish’s body (being extremely careful not to make contact with the gills), but a good quality net fitted with a catch-and-release bag is a valuable asset. I prefer to play my fish "especially the larger ones" on the reel. A premium pike is usually good for one or more runs and a pile of loose fly-line on the deck is an open invitation for a hang up and a break off.

Large pike lake can be a very puzzling piece of water but in spring and early summer the fish will likely be found along the weed edges in five to 10 feet of water. Cast in a fan-like pattern covering all the reachable water. Also keep your eye out for "nervous" water where schools of bait fish break the surface. Chances are good there’s a marauding pike below. Drop your fly into the middle of them, give it a twitch and man your battle stations.