Pretty Is As Pretty Does

"Iconic" is a word that’s thrown around all too frequently these days, but for those who’ve rightfully earned the label, no word better captures what Merriam-Webster describes as "widely known and acknowledged, especially for distinctive excellence". Shakespeare’s Ugly Stik fishing rods have undoubtedly earned that distinction. For 40 years Ugly Stik has been the "go-to" for those seeking durability, reliability and affordability in a fishing rod. Now, after four decades with little change, the Ugly Stik is undergoing a significant evolution. Fortunately, the hallmark characteristics that made it the undisputed leader in its class since its inception will remain. 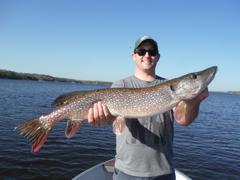 The Ugly Stik built it's reputation as being an affordable, durable rod well suited for tough fish like northern pike

The Ugly Stik was conceived and born in 1976 during a watershed time in the development of fishing rods. Graphite had been recently introduced in golf club shafts and the race was on to incorporate the material in fishing rods as an alternative to fibreglass. One of the challenges manufacturers faced was cost - at the time, graphite traded at about $400 per pound, while fibreglass was about $0.50 per pound. Shakespeare’s development team came up with the idea of building a rod with a graphite core wrapped in fibreglass. The prototypes amazed their engineers, as the rods were stronger than anything they’d developed previously, in fact they were near unbreakable. They rushed their discovery up to the marketing team and were immediately criticized; while the rods were undeniably strong, the marketers, who were ultimately responsible for selling the rods to the public, believed they fell far short of expectations on the cosmetic front. In fact, they described the new rods as being the ugliest they had seen.

The engineers left the meeting discouraged. The marketers, however, put their heads together and made what would become an industry-changing decision - they would file patent applications and trademarks under the name Ugly Stik. Just that quickly, a legend was born. By their own admission, Shakespeare’s first production efforts were truly ugly. The blanks weren’t pigmented, the graphite showed through the clear fibreglass, and the wraps were black with white pinstripes, but they were strong like fishermen had never before seen. At that year’s fishing trade show in Chicago, the Ugly Stik was demonstrated lifting heavy weights and buckets of water, or being shown off in tug-of-war competitions with competitor rods, many of which ended up broken and discarded.

Over time, the cosmetic appearance of the Ugly Stik was improved, including the retention of a clear tip which quickly became a signature feature of the rods. The rods were supported by an aggressive advertising campaign that showed them being bent by models or caught in car doors or boat docks. They never looked back and the Ugly Stik became the best-selling rod of all-time, a strong and affordable rod that would serve the average angler for many years. 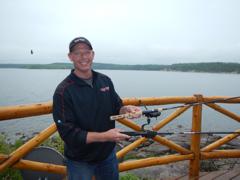 The Ugly Stik remained virtually unchanged for nearly forty years. In 2014 Shakespeare introduced a second generation Ugly Stik, the GX2 . Still retaining graphite and fibreglass as its core while featuring new cosmetics and construction methods, including the introduction of a blank-through-reel-seat design and one-piece stainless steel guides, the GX2 boasted improved sensitivity and balance when compared with its predecessors, without sacrificing its renowned strength. Of course, not forgetting who brought them to the dance, the GX2 retained the characteristic clear tip of the original.. Development didn’t end there, however. 2015 saw Shakespeare launch the Ugly Stik Elite, which features 35% more graphite than the GX2 to create an even lighter rod with a crisp action and increased sensitivity. The clear tip remained, naturally, as did the company’s commitment to rod strength and affordability.

The Ugly Stik Elite is available in a wide range of models, from one and two piece rods in both casting and spinning styles to a series developed specifically for salmon and steelhead anglers, who require longer rods and increased power. I recently had the opportunity to fish both the GX2 and the Elite on Manitoba’s Winnipeg River system. This productive fishery offers a broad diversity of species that would truly test these rods, from smallmouth bass to walleye, sauger, perch and pike. I couldn’t have been more satisfied with how they performed. 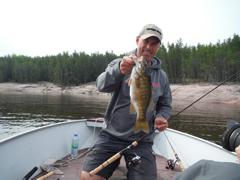 Pike was a no-brainer, falling into the wheelhouse of the Ugly Stik’s reputation for being tough and durable, if not particularly sensitive. The group I was fishing with caught literally hundreds of pike over four days, ranging from hammer handles to mature females in the 15-pound class and up. The rods performed beautifully and controlling fish proved to be an easy affair but the real test would be how they handled situations requiring increased control and sensitivity.

If there’s been a perceived shortcoming of Ugly Stik rods over the years, it’s been their performance when precise casting or jigging is required. Targeting smallmouth bass on the Winnipeg River generally means casting plugs, spoons, spinners or baited jigs toward shore and retrieving them back to the boat. Over-cast and you’re liable to get hung up on shoreline rocks or vegetation; toss your offering short and you’re missing the fish that hug the near-shore rocky contours. Of course, each cast is a little different from a boat being pushed by both current and prevailing winds. 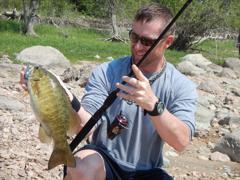 Both the GX2 and the Elites proved themselves reliable and accurate. In short order I was pinpointing my casts exactly where I wanted them. If I had to adjust the distance, it was a simple matter of "feel" in my casting motion, that hard to describe internal adjustment that an angler has to continually make. Success means a reliable response from your rod, and these Ugly Stiks were more than up to the task. As to jigging for walleye, where sensitivity is all-important? Well, let’s just say I won the group award for landing the smallest fish of the trip, a 9-inch walleye I pulled out of 18 feet of water on a ¼-ounce jig tipped with a minnow. Experienced anglers know just how sensitive your rod needs to be to hook one of these notoriously light-biting fish, especially one so small in a river current situation. Fortunately, for the benefit of my ego at least, I landed many more walleye on the trip, including a 27-inch beauty. Most importantly, at no time did I feel my rod wasn’t up to the challenge. 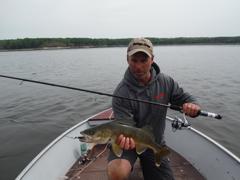 Shakespeare’s Ugly Stik line-up has been a mainstay of budget-minded anglers since its inception in the 70s; based upon my recent experiences with the latest rods, I’d suggest they’ve got many more years of angler satisfaction ahead of them.