Atlantic Salmon - The Fish of 1000 Casts

Atlantic salmon fishing has long been considered the realm of the wealthy. This opinion is not entirely without merit, as many, if not most, of the world’s great Atlantic salmon rivers are in out of the way, difficult to access places, generally far removed from urban centres. Further, where they are more accessible, many of the best pools are tied up in private hands. Though not often spoken of, however, I tend to believe the notion that Atlantic salmon is a rich man’s game is appropriate more because the greatest investment in salmon fishing is time. The adage that "time is money" is, unfortunately, most often true, and wealthy folks simply seem to have more time at their disposal than do we common folk, the great unwashed. The Atlantic salmon, the "leaper" as he’s known, has a well-earned reputation as a challenging fish to fool into taking a fly. In fact, they’re often referred to as "the fish of 1000 casts" and, while that might be somewhat of an exaggeration, it’s certainly true that you can spend many fishless days before hooking one. Most anglers won’t invest the time required for Atlantic salmon without the assurance they’re going to catch fish and it’s the time invested rather than the true monetary costs that lead to most considering salmon to be the domain of the wealthy. 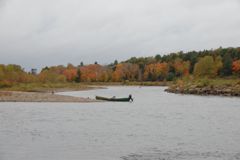 Canadian anglers are blessed with some of the finest Atlantic salmon angling in the world. While this fishery has suffered greatly over time due in large measure to overfishing, management strategies implemented over the last couple decades have seen resurgence in populations in many of our traditional salmon rivers and, as a result, anglers currently enjoy increasing success and opportunity. 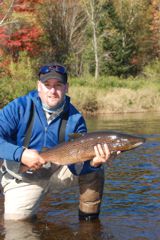 A typical male salmon from the Miramichi

Nova Scotia, New Brunswick, Quebec and Newfoundland/Labrador each boast a thriving salmon fishery. Tops among their many salmon rivers, however, is undoubtedly New Brunswick’s famed Miramichi. It can stake claim since the 1800s as North America’s finest Salmon River, its annual run of fish can approach 100,000, the largest on the continent. Those in the know say that it’s responsible for 50% of the rod-caught salmon each year. Anglers considering their options should decide what matters most to them, as some rivers are known for high numbers of fish in their annual run, others are renowned for the size of fish. Few can boast of being near the top of both lists.

Though somewhat remote and therefore relatively costly, rivers like the George in Quebec’s Ungava region and the Eagle in Labrador, are revered for the numbers of fish they consistently relinquish. On a trip to the George a few years ago, and as a neophyte salmon angler, I hooked 17 fish over three days, landing 11, and I’ve heard that double-digit days on the Eagle are not uncommon. 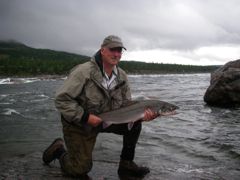 The author with a nice George River Atlantic salmon

Fly-fishing Atlantic salmon is an adult’s game. The first time out you usually get your butt kicked. On my initial visit to the Miramichi I didn’t touch a fish through two days of fishing, and my story isn’t an unusual one, as Atlantic salmon are notoriously finicky. All you can do is dust yourself off and try again, nd again. Eventually, if you’re persistent enough, you’ll hook a fish. Maybe you’ll land it, maybe you won’t. Inevitably, however, you’ll fall in love with salmon fishing. 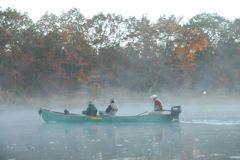 A misty morning on the fabled Miramichi River in New Brunswick

The biggest mistake I made the first few times I hooked a salmon was that I was "playing" them, not fighting them. There’s simply no room for the timid or lackadaisical here. You’re battling a fish that is willful and game to the core, fighting as though it has absolutely nothing to lose. You have to take a similar approach.

Over time and a handful of rivers I’ve come to understand the addictive nature of Atlantic salmon angling. This is fishing with a purpose, every cast must be precise, every swing of the fly followed with clear-eyed intensity. And once you hook an Atlantic, you experience a feeling unlike anything else-a feeling that everything else in the world can, and should, be put on hold.

Western Canadians have had an opportunity present itself recently that can introduce them to the world of Atlantic salmon while concurrently allowing them to see one of the world’s most beautiful countries. Iceland Air has started flying direct from Edmonton to Reykjavik-it’s a mere 6 hour flight and costs less than $800 return. With some 50 salmon rivers on this small island nation, there is no shortage of opportunity for visiting anglers. Fishing pressure is carefully managed through rod-day quotas on each river, so angler expectation of success is deservedly high. I had the opportunity to fish Iceland this summer with the folks at Lax-A Fishing Club (www.lax-a.net) and in two days of fishing, sharing a rod, my partner and I hooked 10 salmon, a pretty good result on any salmon river. Iceland is promoting itself as the antithesis to the "1000 cast" rule and I saw no reason to question it. 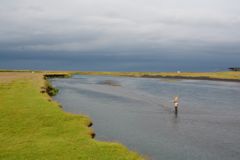 The future of this wonderful fish across much of its home waters remains, unfortunately, uncertain, but all signs are pointing towards a positive trend. The few Atlantic salmon experiences I’ve enjoyed have allowed me to gain a deeper understanding of the traditions and lore of salmon angling. More than anything, I’ve discovered that salmon fishing is not for the mere lucky, or the wealthy. It’s for those who persevere, exhibit patience and are willing to hone their skills to the highest level. It’s for those who can finally and fully understand that when they go Atlantic salmon fishing, it’s not really the fish they’re after.