A View From The Aerie

In August of 2015, Bob Wood, 62, and a friend were fishing the Winnipeg River for pickerel. As he reported to the CBC,"I thought I had a snag and lo and behold, it wasn't a snag". So, I thought it must be a big jack,"Wood related". All of a sudden, this great big fish just jumped right out of the water and I said a few choice words..."What was that?!" And the guide who was with us said "That’s a monster sturgeon". When Wood finally landed the fish after a 45-minute tussle, the guide estimated the fish weighed between 85 and 100 pounds and was between 90 and 100 years old. There, in a nutshell, is the beauty of the Winnipeg River - you never know what you might catch and, whatever it turns out to be, there’s a strong chance it could be trophy-sized.

The Winnipeg River winds its way from Lake of the Woods in southwestern Ontario to Lake Winnipeg in central Manitoba, passing through some of the most beautiful Canadian Shield landscape along the way. Historically speaking, the river has made a meaningful mark. For thousands of years it was an important travel corridor for the Cree, as is revealed in the many petroforms found along its length. Fur traders plied this route for several hundred years, the Winnipeg River watershed occupied the southeast portion of lands granted to the fledgling Hudson Bay Company in 1670. Later, before the completion of the national railroad, the Winnipeg River served as the travel connector between the Great Lakes to the east and the vast prairies and Rocky Mountains to the west. Today, the Winnipeg River is home to several hydroelectric dams, but the rugged beauty that has characterized the river over the millennia hasn't waned. Nor has the quality of the fishing. 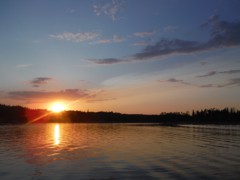 A spring sunset on the Winnipeg River

Unlike her more renowned sister river, the Red, the Winnipeg River is more of a cold-water system and, as such, the fish species present are a little different. Where the Red is celebrated for its catfish and drum, along with its famed fall "greenback" run of walleye, the Winnipeg is all about smallmouth bass, pike, perch, and walleye with, as Bob Wood discovered, enough sturgeon to keep an angler guessing. Looking at the species composition in the Winnipeg, the list reads like that of a traditional shield lake fishery. That’s not surprising given the source of the river, the landscape it traverses, and the fact that in many places it expands to widths that if it weren’t for the current, you'd never know you're not on a lake.

I first fished the Winnipeg River nearly 20 years ago on a cool September afternoon. We were fishing near the mouth, just south of Lake Winnipeg, and the walleye were schooled and active. In what remains probably the best day of walleye fishing I’ve ever enjoyed, we caught fish after fish trolling crankbaits in the slow current, many of them in the five to eight pound class. It wasn’t until 2015 that I had the opportunity to fish the river again. Last May I visited Eagle Nest Lodge, one of several boat-in or fly-in lodges on the river and the one that’s closest to the Ontario border. With the diversity of species available, it’s difficult to know where to start when you first hit the water. Of course, whenever you fish Manitoba your thoughts naturally turn to walleye, so that’s where my fishing partner and I began. 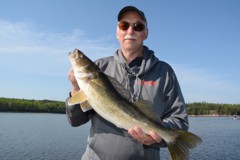 River fishing is, by and large, more challenging for first-timers than is lake fishing. On lakes you just follow your sonar and your experience to the fish, but it’s not quite so easy on a river. Fortunately, Eagle Nest provides guides if you want them, and we were more than happy to have one of their experienced local anglers along to show us around the river.

While there are all sorts of proven presentations for walleye, it’s tough to beat a baited jig. We vertically jigged in 12 to 16 feet along a flat adjacent to one of the river’s many islands and were immediately into fish. Over the course of a couple hours, and without moving more than 100 metres, we caught walleye, pike, sauger and perch. The perch were all what most would describe as "jumbos", and my best walleye that morning stretched the tape to an impressive 27 inches. Diversity and size of fish are what differentiates the Winnipeg River from most others, and its reputation held firm for us. 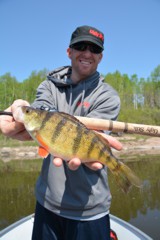 Virtually all the perch we landed could be described as "jumbos"

Over the next couple days, we changed tactics and targeted specific species in series. We spent one afternoon casting topwater baits and floating crankbaits to post-spawn pike in shallow bays, hooking fish until we lost count. While we didn't land any of the many 20-pound plus hens that cruise these waters, we brought no shortage of pike in the 10 to 15 pound class to the net. 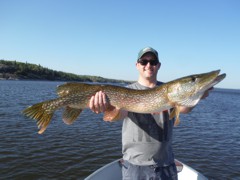 The following afternoon we struck out after smallmouth bass. We found them in relatively shallow water along rocky points and shorelines, where they were more than eager to smash small rattling crankbaits, spinner baits and tube jigs cast towards shore and retrieved slowly back. These bass were broad-shouldered and scrappy, and we managed to boat many in the 16 to 18 inch class.

This section of the Winnipeg River is very remote, so when we weren’t landing fish we were enjoying the wildlife and the unspoiled wilderness that girded the shorelines. Bald eagles, otters, painted turtles, black bears and a myriad of other birds and mammals entertained us over the days. Throw in a daily shore lunch of fresh caught fish and the trip reminded me more of an excursion to a remote subarctic lodge than it did a resort only a couple hours from Manitoba’s largest city. Think about Manitoba fishing rivers and for most anglers the Red comes immediately to mind. But for those seeking more of a wilderness setting and the opportunity to catch boatloads of more "traditional" fish species, the Winnipeg River isn’t to be missed. And you just never know in the Winnipeg River - maybe you’ll be the next angler to land a one hundred pound sturgeon. 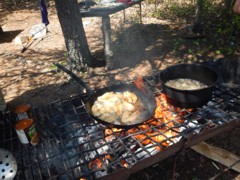 No wilderness fishing trip is complete without a shore lunch