I never knew the ice fishing season would turn out this way, but as of yesterday, my tally is 3 monster adventure trips on ice in the past 2 months. I do a lot more ice fishing than that, as I have done numerous day trips to familiar places, but these trips I’m speaking of, they’re full on big commitments. What exactly do I mean by adventure trips? They are the sort of trips where I take a big breath, and say something like, "OK, here we go," not fully knowing how or even if, it’s gonna turn out. We gather a group of willing volunteers, set up a plan, and head out in the wee hours of the morning. Most of these trips are still day trips, but they would fall under the epic day trip category.

My last big trip was a quest to find an out of the way perch lake, where I had sketchy reports that jumbo sized perch were a reality. I started the journey at 5:30 am and was joined by Randy and his best friend Kim. Together, with GPS and maps in hand we headed forth. Things were going pretty good, but a trip down a little used bush road changed all that and we got our 4 x 4 pick-up good and stuck, three times. With sheer will power, and a lot of shoveling snow, we got ourselves out of our jam, and back on the road. 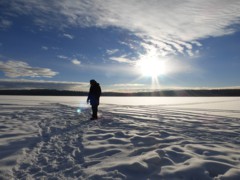 The rewards of backcountry fishing: solitude and at times great fishing

It then took us considerably longer than expected to find an access point to our mystery lake. The short summary, there was no vehicle access, having tried every possible road in. No such road existed. We then resorted to finding the closest cut line, parked there, donned our walking boots, pared down our gear we were gonna take and pushed off into the bush. The GPS said we were close to the lake, but a solid impenetrable stand of black spruce blocked our access. We continued along the cutline for nearly a kilometre to a point where spruce gave way to aspen, and access became practical. We set off into the bush and made a path downhill and shortly, the lake that had eluded us for so many hours, came into view. I took a moment and looked at my watch. It was 12:40 pm, a full 7 hours after I had begun this journey.

The lake itself was beautiful. There was no hint of development anywhere along its shores. Plus, we had found it, and I was pleased. Kim quickly cut three holes and grabbed his perch outfit. We fished those holes for a few minutes, then decided to move toward a prominent point a few hundred meters distant. I tried jigging one other spot before the point while Kim and Randy went straight there. At the point Randy cut a string of holes from shallow to deep and back again. I joined them and five minutes in Randy had some light bites from the deeper holes, which were around 15 feet. We joined him, and just as quickly as I sent down my little Len Thompson spoon and mealworm, I felt a shock and a sharp tug on the end of my line. 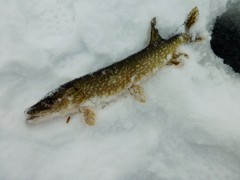 First fish: a pike. Proof positive that we had found the lake, and there were fish in it

Instinctively I set the hook and the bend in the rod said this was a sizeable fish. My thoughts were imaging "big perch" but the fish powered off in one big run, and we all suspected a pike. A few minutes later we were proven right and I had the first of many pike on the ice. Right about then Randy set the hook and this fish fought differently. He brought it up and it was a fat 7 inch perch. Not a monster by any standard, but now we knew we were in the game. We found our lake, and in it were perch, plus some bonus pike too.

I dropped my mealworm tipped spoon back down and this time I felt something suck on it twice, giving me nearly a heart attack. I set the hook into empty water, and never tagged that perch, which I figured had to be jumbo. Randy, and now Kim were really in the game, and perch were coming up steady. They were thick and healthy fish, most between 5 to 7 inches. 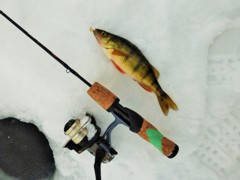 Thinking my spoon and bait combo with an upsized treble hook was simply too big a presentation for most perch in the neighbourhood, I sized down to a wolfram jig and tipped it with half a mealworm. I no sooner got it down and I had a perch on. I dropped the hook back down and was immediately into another, and then another. In short order we had each caught more than a dozen perch, but the big ones were elusive. Kim decided to venture right out into the middle of the lake while Randy and I stayed at the point. Both Randy and I were catching perch like crazy, but nothing broke nine inches. Randy, was splitting his jigging time between using the smallest of Len Thompson 5 of diamonds spoon and a glow demon jig. Both were lighting it up for perch and pike. 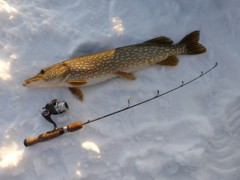 A heavy pike, and a bonus catch, as it crushed a small jig intended for perch

The pike bite got me excited so I grabbed one of my tip ups, drilled a hole 10 feet away from where I was jigging, and dropped a big anchovy to the bottom. I don’t think I counted to 10 and there was a pike on. I caught that one, and then had a pike biting my tip up pretty much every 5 to 10 minutes. Both Randy and I kept catching perch and off in the distance, Kim was not returning, so we suspected he was into fish too. 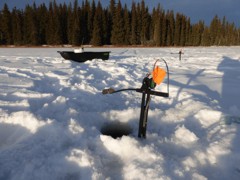 The unsung tip-up was a pike catching machine

The sun was starting to settle on the horizon and I could feel the day slipping away into twilight. I felt the pang of loss, as we had spent way too short a time on this lake. In spite of the lack of jumbo perch, we had found this beautiful backcountry lake full of fish. It was a lake completely out of the way, hidden from the eyes of all, except for those willing to step outside their vehicle and commit to the hike in. And those jumbo perch, they might still be there and were simply hiding. We barely scratched the surface of this hidden gem and I for one, can’t wait to go back.