Going With The Flow

It’s been another long, hard icy winter, as the old timers used to say. Don't get me wrong, I'm pretty partial to the pleasures of hard water angling, and western anglers can still find places to actually cast a horizontal line - even in the deepest, darkest winter months. Some are man-made opportunities like warm water discharges from thermal power plants or releases from dams. Or if you live in Alberta like I do, the warm winds that come whistling down from the mountains leave many high country rivers ice-free and fishable. Still, it’s not like summer and the anticipation of spring is palpable. Then suddenly it’s April 1st, the traditional opening of fishing season in the province - and summer, if not technically here, is right around the corner. 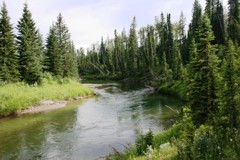 They say it’s a long time from May to September, but sometimes life happens. How many of us wake up one fall morning to observe the first permanent snow on the ground and experience that empty feeling that we didn’t get out nearly as many times as we planned during those whimsical fly-tying or tackle repair sessions last January. Where did all the time go? So it’s another six months of being zipped in an ice-angling tent or a quick get-away to some sunny fishing destination down south. Nice but not all together satisfying. But there are ways to maximize your western angling opportunities. All you need to do is go with the flow. 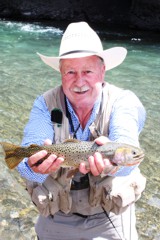 Every angler talks about it but nobody can do anything about it. Still it’s the number one factor in turning a potential fishing trip from a bonanza into a bust. Albertans are particularly under the influence of varying and often violent weather patterns. Thunder storms build up many afternoons over the foothills and northern boreal, cold fronts drive down from the Arctic triggering three-day soakers or the parched prairie is searing under a hot sun that turns trout and other fish surly and sullen. Like they say, if you don’t like the Alberta weather wait five minutes. And finding a blown-out drainage when you arrive at the bridge has wrecked many a fishing trip. Clearly keeping an eye on the weather prediction sites - many detailed ones which are available on the internet - can provide a reasonably accurate picture of the atmospheric conditions at your destination watershed.

The existing conditions on a drainage is also available on the Alberta Environment and Parks web site where stream flows on numerous Alberta creeks and rivers is displayed in real time from many government river gauges. Even if the particular stream you want to fish isn’t listed, there’s almost always one elsewhere on the drainage where you can get a reasonable idea about the state of the river. The key is to stay flexible. Even if the foothills streams are running high and dirty, there are many grayling creeks in the northern boreal which march to an entirely different weather drummer.

Spring creeks - like the famous Raven River - and tailwaters below dams are also reasonably impervious to periods of rain and can be fishing fine when other rivers in the region and running like chocolate milk. Of course, stillwaters are also the last vestige of the Alberta weather-frustrated angler. The other weather-related factor is the state of the roads. Alberta’s blacktops are mostly resilient to rain, but the oil roads and county grids in trout and grayling country - mostly clay-based - are highly susceptible to precipitation and can turn into impassible quagmires after a two-day soaker. They say getting there can be half the fun, but not if it involves getting stuck. 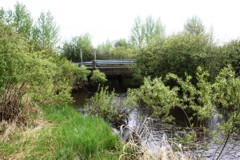 When you load waders, tackle bag and a lunch cooler into your fishing truck and head out in the gray dawn for some faraway blue line on a forestry map there’s likely a compelling vision locked in your memory bank. A sweet little river, cool dazzling water and trout, grayling (or maybe both) sipping seductively on a steady hatch of may or stoneflies. It’s a pervasive image, but to turn fantasy into reality, there is one overriding variable that can make or break a road trip. That’s the water. The state of the water - whether it’s flow, temperature or turbidity - is the number one controlling factor in angler success or failure.

Earlier I referred to April 1st as the theoretical start of the summer angling season and many Alberta anglers head out to wet the first line of the year more as right of passage than any hope of catching a fish. Most streams with an early season opening (and remember that are many more with spring spawning closures extending to June 16) are cold, cloudy and full to the willows with run-off. But there are others, like spring creeks where snow melt isn’t nearly as influential. Or southern mountain-influenced rivers like the blue ribbon Crowsnest or Bow, where the local run-off has already passed through and there’s a reasonable expectation of good fishing. Except there’s another consideration for our snowpack-sourced streams. The higher you go into the Eastern Slopes the more delayed the break up is.

Four of the great rivers of North America trace their source to the winter snow fall on the Alberta Rockies. When all that stored up moisture melts sometime in June, the second period of high water - known as the mountain run-off - occurs. Again creating a two or three week period of diminishing returns where an alternative destination is your best bet. The problem is exasperated with glacier fed rivers like the North Saskatchewan, Athabasca and Big Smoky where the fishing doesn’t really come into its own until August when cooler nights slow the flow. Again, timing is everything.

While high stream flows are a prohibiting factor, low water levels and the rise in water temperatures that inevitably accompany them are also a prohibiting factor. Last year Alberta anglers experienced government stream closures because of a prolonged drought and dangerously high water temperatures in several southern trout rivers. Even when angling is permitted, low flows and warm water translate into stress, lethargic trout and reduced angler success.

While April may be the beginning of the "summer" fishing season, the last two weeks of May and the first fortnight of June is generally recognized as fly-fishing Christmas. This is when the prolific hatches of "drake" mayflies and super-sized stoneflies come off the central Alberta brown trout streams. It’s a sumptuous time when the big brownies feed freely even under a blazing sun and dry fly fishing comes into its own. Then, suddenly its gone. Or more to the point, it has moved up slope. All anglers have to do is drive a little further back into the foothills to repeat the magic. That’s the cosmic thing about altitude and Alberta angling.

The big green drake mayflies that come dancing down the riffles of the North Raven River in the first week of June, are present back in the mountains on the South Ram - one of our premiere cutthroat trout rivers - during the long August weekend. All you have to do is climb. Altitude also creates early season open water when the flatland streams are still locked up under a metre of ice because of the Chinook winds. Another flexibility factor. 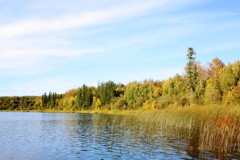 Stillwater angling for trout requires a different set of skill sets - and some specialty gear - than river fishing. They are well worth acquiring and investing in. Because when one of those iconic Alberta three-day dumps blows through it’s likely going to take another week before the creeks are back down to a fishable flow and visibility. And with our short but sweet summer, who’s got a week to waste. Alberta’s excellent stillwaters - several which are managed for quality stocked trout outcomes - provide excellent alternative angling opportunities because many are enclosed systems aren’t overtly influenced by flood waters. Not to mention the possibility of catching (and releasing) a 20 inch-plus rainbow, brown, brookie or tiger trout. Because most Alberta stillwaters are highly eutrophic and have marshy, organic shorelines, some kind of floatation device is the best way to access them and maximize angling opportunities. And provide an excellent way to keep on fishing whatever the conditions.

When weather and water conditions are unfavorable for trout fishing, that’s no reason to stop angling. I’ve already talked about Arctic grayling as an alternative and there’s a huge swath of grayling creeks in the Athabasca River drainage stretching from Hinton to Fort MacMurry and in the Swan Hills too. Mountain whitefish can also provide good sport when the trout are slow - especially in late summer and early fall when they are staging for their fall spawning runs. The prairie rivers also hold large populations of goldeye and mooneye which are voracious bug eaters and rise freely to dry flies. But most of all, don’t overlook the warm water predator species. When the trout cool off, the walleye and pike fishing can be hot, with a 8-weight flyrod and a baitfish pattern like a Clouser Minnow or Lefty’s Deceiver. 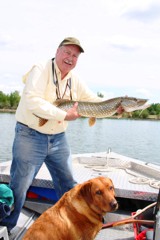 To be fair, I’ve got a lot of respect for "home water" anglers. There’s no doubt that they know their waterbody, its fish and all its moods. Mainly because they have invested so much time acquiring the knowledge. But it’s a big ask to stand by and wait for a blow-out to recede during our short but precious summer angling season. To increase your angling days exponentially it’s better to run and gun, go with the flow, and stay flexible.