Many fly fishers are intimidated by larger rivers, but they really need not be. It can be overwhelming to look at a large river and try to figure out where to begin but once you get used to them and understand that they often hold more and larger trout, you will realize they are well worth learning how to fish them. Everybody’s definition of large is relative based on what they are used to. My definition of a big river is one that offers no spot you can safely wade across even in low water. Larger rivers provide trout with everything thing they need to not only survive but thrive, offering food, shelter and plenty of oxygen. Many anglers would be surprised at how many trout actually live quite close to the banks in larger rivers. The friction between the current and the bank naturally slows the water and provides the trout with relief from the current. It's also a good place for them to find food items that they might not have otherwise found out in the middle. Minnows, sculpins and terrestrial insects, such as ants, beetles and grasshoppers are abundant near the banks during the season. Anglers somehow always want to cast as far as possible, way out into the river or towards the middle of lake when in reality the fish are going to be where the food is and that's not the middle of a rushing river! 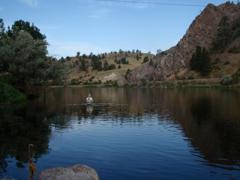 Don’t be intimidated by larger rivers

One mistake anglers often make is assuming the fish are in the middle of the river and are therefore not reachable without a boat. The key to fishing larger rivers is to break it down into smaller sections, small streams within a stream if you will. There is no sense worrying about water you can’t reach, ignore it and look for the prime spots in the water you can reach. Fish are always going to be in areas that offer them protection, from both the current and predators, as well as, a source of food. They live on the simple principle that calories taken in must exceed calories expended. In other words they can’t fight the current constantly, or move long distances to eat small food items. This is inefficient and they would not survive very long doing so. You will always find the biggest trout in what we call prime lies. Prime lies offer trout all of the above and will hold a single trout or possibly many trout depending on the size. If one leaves it will soon be replaced by another. Some prime lies like deep pools are obvious and everybody fishes them and for good reason. They often hold big fish and very possibly lots of them. Others maybe harder to spot, a depression in the bottom of the river can be enough of a current break to create a prime lie and hold a fish or two. 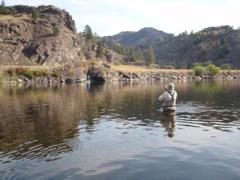 Another mistake anglers make is assuming the fish are always in the same place. While fish in rivers don’t move around as much as their counter parts in lakes they will still move as the situation dictates. Many times you’ll find fish, and big fish, in very shallow water first thing in the morning. This is because they moved into the shallows under the cover of darkness to feed and until something disturbs them, whether it be an angler or a bird etc... they will stay there. Many of the trout's larger diet items such as minnows and sculpins live in the shallows and get active at night. Big meals are one of the few things that will draw big fish out of their prime lies to feed. They will always return to the safety of their lie as soon as they are spooked or the food source they have been feeding on dissipates. 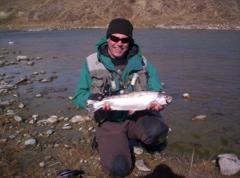 The saying "big fly- big fish" is true, however, in rivers it doesn’t mean that trout won’t eat smaller insects. While trout in larger waters will have access to greater quantities of larger food items such as leeches, minnows and sculpins, it doesn’t mean they won’t eat smaller offerings as well. The angler should be prepared with all sizes of fly patterns to match what the trout are feeding on at the time. Trout in big water may not actively feed on small hatching insects but if you can find a place where the insects congregate chances are good you will find some feeding fish. Midges are a great example of this. Single adults floating down the river may go unnoticed but not the clumps gathered behind rocks, in back eddies and other slower parts of the stream. These areas present excellent opportunities to find active trout. Hatches can also be a clue as to where the trout are in a river. Make note of where you see rising fish and concentrate your efforts in those areas during non-hatch times with nymphs or streamers. Foam lines are a sure sign of where there is a current seam that will likely be delivering food to the fish. In larger rivers these foam lines are usually very prominent and as we always say "where there's foam, there's fish".

Inside curls on a river always hold fish because the current is concentrated in what is called a feeding lane. You have slower water on the inside of curl, where the fish can lie without expending any energy, and a smorgasbord of food passing by. They dart out and grab what they want or even better anything that washes into the slower water. The water on the inside of curls can range from still to even a reverse current, or back eddy. Larger rivers offer the angler an advantage in that they can often get closer to the fish as opposed to smaller streams, where quite often a lot more stealth is involved. Always take your time when approaching promising looking water. I always work my way out to the good looking spot, making a few casts into the shallower water, along the banks and especially in front of me where I'm about to walk. It's very frustrating to spook a fish as you are wading out to the prime spot. 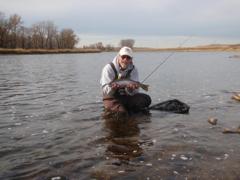 Fish your way out to likely looking spots, you never know what you might find

Another advantage to larger rivers is that generally they will have cooler water temperatures which is becoming increasingly important. Because they hold larger volumes of water they will generally take longer to warm up. Last year in Alberta we had low water levels resulting in high water temperatures and consequently many streams and even larger rivers like the Bow were closed for a time. Generally though, larger rivers will provide better fishing during low water years and it looks like we are in for one again this year in Alberta. Don't be afraid to try out these larger bodies of flowing water where the size of the fish and the fight they put up with the current to aid them will make it all worthwhile.