Fly-Fishing Pike Through The Seasons

I jerked the big streamer just below the surface in aggressive 18-inch strips. Out of the pencil reeds, as if on cue, a moving four-inch boil of water emerged, advancing steadily on the colourful streamer. It was all I could do to steady my nerves enough to continue moving the fly. After a seemingly interminable wait the boil erupted in a frothy spray beneath the fly and I quickly lifted my rod tip to set the hook. I gasped audibly when I realized there was no resistance, then ducked instinctively. The heavy streamer flew in a straight line over my head, landing with a resounding thump on the chest of my fishing partner, Jim Mitchell. Jim yelped, more out of surprise than of pain, and we fell back on the boat seats, laughing and giggling like school kids. We both knew we’d have many more opportunities before the day was out. Let me state this simply - if you’ve never fished northern pike with fly gear before, get out and try it. Not because it’s a purer form of angling, or more sporting than spinning tackle, or because in some esoteric way it puts you on a more even plane with your adversary. No, try it because it’s just plain, old fashioned fun. Pike are one of Canada’s most plentiful and widely dispersed game fish. Sitting at the top of the freshwater food chain, these aggressive predators are also one of our easiest fish to catch, striking violently at any unwary fish, reptile, bird or amphibian that happens to wander too close to its underwater lair. That predatory instinct, coupled with a pike’s natural adaptation as a sight feeder, make him an ideal candidate for fly fishermen. 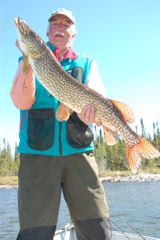 In spring, look for mature pike in shallow bays with emergent vegetation.

Spring is probably the easiest time of year for the fly angler pursuing pike. Ice-out and spring means spawning season for old Esox lucius, and as the early season sun warms the water, pike move into the shallows for their annual breeding ritual. The males typically move into warm spawning bays first, with the larger females following shortly thereafter. They are looking for weedy, mud-bottomed areas to lay, fertilize and incubate their eggs. The warming waters also attract hordes of forage fish and keep post-spawn pike in the shallows for an extra few weeks. Shallow water pike allow for wade fishing, and this is not only the most enjoyable technique, but arguably the most successful. Boats of any kind will often spook fish when they’re in shallow water. The downwind side of the bay is likely to be the warmest, look for pike there along mudlines or within and adjacent to emergent vegetation. One rule of thumb with spring pike to remember is that no water is too shallow; they’re often found in 18" of water or less. Begin your search from a spot that allows you to cast towards shore into mere inches of water. Cast in a full circle, being careful to thoroughly cover all the water. Pike are often a little slow at this time of year and you may have to run your offering right in front of their nose. If you get no takes, move 30 feet and repeat the process. If you do hook a fish, continue to cast from that same spot; pike often hang out in close proximity to one another, especially during the post-spawn period.

As lakes warm, pike leave the shallows in their search for cooler waters, particularly the older, larger fish. At this time of year they’re most often found in depths of eight to twenty feet. While summer is not as productive for trophy fish as is spring, you can still be successful if you’re willing to adapt your tactics. Look for summer pike along drop-offs, sunken reefs and adjacent to deep weedlines. Pike continue to require structure and forage, and the wise angler seeks these features when searching for summer fish. Because of the increased depth of mature fish at this time of year, you’ll have to cast out of a boat, canoe or belly boat. Fish with the wind at your back; this will allow you to cover target areas while drifting, meaning minimal water disturbance. Given that you’ll be fish deeper water than in spring, switch to a sink-tip or full-sink line. Vary your retrieves, both the length of the strip and the pause between strips, until you get that first take. Experiment to find out what style of retrieve will trigger pike into striking. 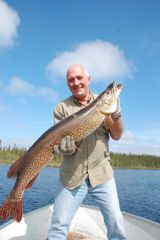 Switch to sing-tip and full-sink lines when seeking large pike in summer as they’ll be down deeper seeking cool water temperatures.

Fall fishing requires more patience than at other times of year for the fly fisherman, but it can also be the most rewarding. Many anglers feel this is their best opportunity to land a trophy-sized pike. As the water cools pike move back into the shallows, often the same waters where they were in the post-spawn period. The trick is to fish them as you did in spring. As the year’s growth of weeds die off, however, pike will gradually move back out into deeper water again, following the forage fish. As a result, you may have to search thoroughly to find them, but be patient; they’re feeding actively at this time of year and are eager to take any available prey item. Cooler water will slow pike down, so slow down your presentation in step. Fishing at midday will offer the warmest waters and the most aggressive fall pike.

Pike fishing calls for relatively heavy fly tackle. I recommend using a 9 or 9 1/2 foot rod in 8 or 9 weight. Use a fairly fast rod, as they provide more control when casting large, heavy, wind-resistant flies. Your reel should be able to store up to 100 yards of backing. While as a rule pike don’t make long, screaming runs, large fish can peel off a lot of line in a hurry. Select the reel with the smoothest drag system you can find, as northerns are known for their thrashing, violent fights which can break tackle if your reel sticks. When considering fly lines, a floating line is ideal in spring. As summer and fall progress, however, you’ll have to switch to sink-tip and full-sink, depending upon the depths you’re fishing. Remember, water temperature is the greatest factor influencing the depth mature pike select. 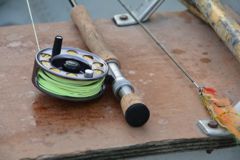 9-foot, 8-weight rods with a floating line are ideal for spring pike.

There are a couple schools of thought regarding leaders. Tapered leaders aren’t required for pike as you don’t have to worry about delicate presentations. A splashy approach will, in fact, often attract pike to your fly. Wire tippets are certainly a wise and economically sound choice and can be found tied-in directly to many commercial pike flies, or you can tie on one of your own. Alternatively, you can go to 25 lb. straight monofilament or alternative lines about four to six feet long. I’ve lost very few flies to pike over the years when fishing with straight mono, and I find it easier to cast and handle than any leader with a wire tippet. 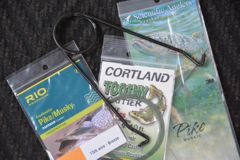 There are several commercial options available for leaders, with or without wire tippets.

There is one basic rule to follow when selecting your pike fly - make it big. Large fish want large prey, so oblige them. Most of the flies I use for pike are in the five to ten-inch range. Any of the popular streamer patterns in this size will produce. I’ve also had success on large popper and leech patterns. And on one trip into northern Alberta, I completely wore out two deer-hair mouse patterns, as pike after pike torpedoed out of the weeds to slam my offering. Fly colour preference is subject to many variables, but I’ve had my best luck on black/white, red/yellow, and chartreuse patterns. 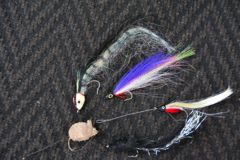 Your fly can’t be too big when seeking mature pike. They’ll easily take bait fish a third their body size.