I came to this glide, perhaps a couple to a few feet deep and the water was as clear as the crisp fall air. There, on the bottom I could see whitefish, Rocky Mountain Whitefish by the hundreds. It was a fall school of whites, and the bottom was literally covered by the gentle swaying of fins and scales and fish, hovering inches off the stream polished rocks. Every fish, every detail, vividly sharp. This was fall and this was exactly what I had hoped to find. 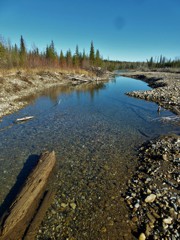 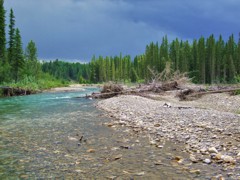 Fall whitefish were the fish of my formative years. They were the fish I most often chased when I walked down to the Smoky River, a short hike from Grande Cache, a scenic mountain town just waiting to be discovered by fellow outdoorsmen and outdoorswomen alike. Rocky Mountain Whitefish not only lived in the Smoky River, I found them in the Kakwa, the lower Muskeg, the Berland, the Wildhay and other area streams. They were plentiful and made for some of my greatest high school fishing experiences.

I love chasing whitefish, and here on this run and on this day, I had found them. A school of them, ready for the catching. I paused for a minute or even more, taking the time to just watch. Watch the fish, swimming in the current, doing what it is that fish do. I pieced together my spinning rod. On the one end was a small bead head prince nymph and a couple feet above it I pinched a split shot. 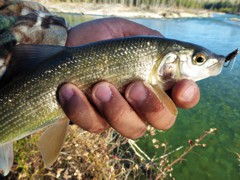 Looking at the fish and the current I tossed the rig just slightly upstream of the closest fish. The rig lands a little short of the edge of the school and as it sinks to the bottom I watch a couple whites shift and move in my general direction. I don’t see anything out of the ordinary, but quickly there is sharp and rapid taps telegraphing off my rod tip. I lift the rod and the closest whitefish tips on its side and shakes, its silvery flank glimmering through the gin clear water. I keep steady pressure and let the white tire himself out. In a minute I slide the fish to my hand where I take a moment to admire its beauty. It’s a good 12 inches long, torpedo like, and in perfect health. I gently remove the fly and place him back in the water where it swims off, but not really in a hurry to get anywhere. I watch the fish and track its movement for a minute, then refocus on the school, which seems to be undisturbed by the latest events.

I pick the same spot to toss my fly and by the time it gets to the bottom another white is there to greet it. The sequence of events unfolds pretty much the same way as the last and I am immensely satisfied. This is the start of a wonderful afternoon. Between fish I take breaks, just to drink in all of what is before me, the fall colours, the clearness of the water, the school of whitefish, and for a while my mind is free. I am living completely and fully in the moment, and for that I am happy. Nature has consumed me with all its grandeur. 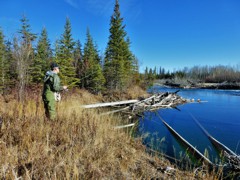 A deep clear pool is always worth investigating

I can’t say how long I stayed, or how long the breaks were, or really how big the fish were. This fishing trip was solely about the experience. Somewhere, at some point I decided to move downstream and I saw something that was truly different. I know there are no rules when it comes to fish and fishing, but as I walked downstream I looked to the shallows and there, in a place where no fish had any right being was a single, very large whitefish. It stopped me in my tracks.

I watched for a while, wondering what was up but I guess it just figured that hanging out in about 10 inches of water on a shallow flat was just fine with him. Why, who knows, but I decided I wanted to try to catch it and I snuck in as close as I dared. I took off that split shot and flicked the fly a few feet upstream of the fish. What happened next surprised me. This near stationary fish that appeared like it was in a trance, burst from its position straight to my fly and inhaled it. It was about as hard a bite as I had ever experienced from a white. I lift the rod tip and was firmly attached. It took a couple minutes to bring the fish in as this was definitely bigger than most. When I got it in I placed my hand around the thick body and noticed it had a dark red gill plate and a bulbous nose, signs that this was an old, mature fish. 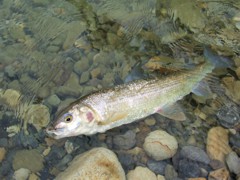 A prime Rocky Mountain Whitefish, designed for feeding on nymphs right on the bottom

After landing it, I did something unusual, I didn’t dig out my camera, but rather admired my catch for a second or two before sliding the hook out and sending him back. With that unique encounter it seemed the perfect moment to end the day, so I did. The fishing was everything I expected it to be, plus something I didn’t expect it to be. I had caught my fill, I had done it in solitude and I had a quality outdoor experience. The fall is here. Got a day and looking for some quality fishing? Go find a stream and go hunting for your own schools of Rocky Mountain Whitefish. They are there, and they are just waiting to give you an amazing fishing experience.