That there is growing demand on our trout streams is no secret. Increased access has rendered few reaches of fishable water off-limits, with liberal ATV regulations and/or limited enforcement also a contributing factor. Further, it appears that there continues to be growing interest in fly-fishing and, when coupled with increased time for recreation, some of our best streams are getting downright crowded. Even during the middle of the week, a time that was historically reserved for those with flexibility in their schedules, it’s become difficult to find the solitude that many fly-fishermen crave. 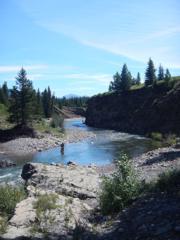 On some more popular trout streams, it seems like there’s an angler around every corner

The challenge goes beyond the difficulty of finding yourself some privacy on our trout streams, however. It wasn’t that long ago that you could wade up any cutthroat stream, tossing a #12 Stimulator into every piece of likely holding water, and be reasonably assured of catching more than enough fish to keep you satisfied. It’s simply not like that anymore, at least not on most days. The trout seem to be a little pickier in what they’ll take and when, and increasingly I’m hearing the frustration of anglers who spend a day on their favourite water only to find the fish with an apparent case of lockjaw.

The facts are clear - there are more anglers crowded onto our trout streams and the fish are becoming increasingly educated. What’s an angler to do? The short answer is that you’ll have to adapt. That may mean revisiting your fishing strategy altogether, from where you fish to how you fish. Memorable days on the water are still within reach for most anglers, but they’re increasingly unlikely if you fish the same way you always have. Let’s look at some of the variables to consider that will influence your success on today’s trout waters.

They’re not building any new trout streams, so at face value it might seem that we’re restricted to the same waters we’ve always fished. But if we break it down to a more detailed level, there are several things we can do to increase our likelihood of success.

If you watch a section of a popular trout stream for an afternoon, you’ll see one pattern repeated over and over. Most anglers skip from one pool to the next; I understand why, as the obvious holding water can generally be relied upon to give up a few trout. The weakness in this approach that you can exploit is to fish the less obvious structure. That means searching out the pocket water between the pools, through the runs and riffles; while seldom holding more than a fish or two each, they will consistently surrender trout if you’re patient enough to methodically work them. Look, too, for undercut banks, fallen trees and boulders that are found between the pools or deep runs. Each will create enough holding habitat to often make fishing them a productive venture. 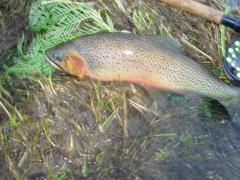 When you watched that unending series of anglers fish through a section of a stream, hopping from pool to pool, did you notice how most fish each pool? Many anglers are in a hurry to get to the top of a pool, as experience has shown it’s a favourite lie for hungry trout. They’re often missing out by not thoroughly fishing the tail, however. Learn to spend as much time on the tail as on the head of pools and you’ll undoubtedly catch more fish.

Of course, there’s no substitute for putting miles on your wading boots if you want to access less crowded water. On one of my favourite streams, my wife and I have gotten into the habit of walking a full hour from the parking lot before we cast our first fly. It can be difficult to walk past so many beautiful pools and runs, but if the objective is to find some peace, quiet and less-pressured trout, it’s worth every step. 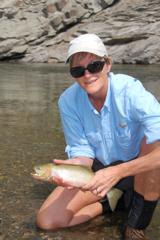 Conversely, don’t overlook the "close" waters, under and around bridges. Many fly-fishermen, believing that any easily-accessed water gets fished heavily, don’t start casting until they’ve waded 100 metres or more. That’s a mistake. Fish will hold where there’s food and safety - the water beneath bridges often provides both these necessities. Without naming names, I’ll tell you that I had two wonderful days fishing rainbows and cutthroats on two popular trout streams this summer, in each case within 100 metres of a major highway. 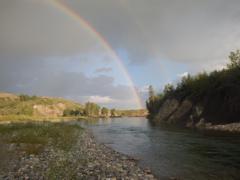 Another option is to take the road less-travelled, meaning finding and fishing waters that are simply less popular among the angling community. In my search for less crowded waters this summer, I fished two streams I’d never fished previously, predominantly because they’re not known to be popular trout waters, I suppose. In one instance I enjoyed two consecutive evenings hooking and releasing rainbows and big rockies on dry flies; in the other, I caught more brown trout on streamers than you’d believe if I told you. The point is that it can still pay to do a little exploring. 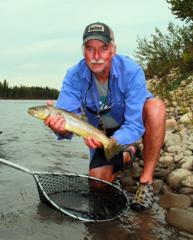 As noted earlier, trout can become selective, even on low productivity, cold water streams where they would typically eat every tasty-looking morsel that floats by. Too much fishing pressure, however, and even the most reliable flies may not be as dependable as they once were. As renowned Alberta fly-fishing guru Jim McLennan once said, "Even cutthroat get the blues". Everything else being equal, the best remedy is to go to a smaller fly. In some cases, much smaller. Where I could once depend upon bushy attractor patterns in sizes #12 or #14 to catch 80% of the fish 80% of the time, I’m now finding myself going to #16s and #18s on a more regular basis. And instead of using attractor patterns, I’m turning with increasing regularity to patterns that more accurately mimic natural hatches.

Another tactic worth trying to increase your catch rate on heavily fished streams, as anathemic as it may be to many, is to fish nymphs and streamers on trout streams where you’d typically fish dry flies only. Nymphs can be fished alone, in tandem with another nymph, or as a dropper below a dry fly. I am seeing an increased use of nymphs on some of our cutthroat waters where a nymph would almost never have been used previously by most anglers. The fact is that, after watching one artificial after another drift by, and falling for the odd one of them, trout will become more particular, and offering a nymph as a change-up often proves to be just the ticket.

Streamers, too, are finding a place on typical dry fly streams where trout are becoming increasingly selective. Small leech patterns, in particular, have proven to be very effective, especially in those pools through which a parade of anglers drifted a series of dry patterns all day long. Like you and I, I guess even trout appreciate a little variety now and then.

Increasingly crowded trout streams can be discouraging, but don’t let them get the best of you. With a few simple changes in how and where you seek trout, you can still enjoy fishing reminiscent of the "good old days".