Keeping your interest piqued and enthusiasm up throughout the hard water months can be a challenge - even for the most committed Fishin’ Holer. Ice fishing has it attractions for sure. And there are a few mid-winter, open-water opportunities below power impoundments, warm-water discharge reservoirs and in the Alberta mountain Chinook wind zone. Still, nothing beats a warm wind at your back and a fly or spin-cast rod in your hand. Even if it means a few hours cramped in an airliner seat and the insults and indignities of modern air travel. Getting there is well worth the hassle if it means a few days in the sun doing what you love to do. Catching fish in an exotic location far away from the ice, snow and 30-below of western Canada. 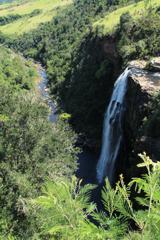 Throw in a vibrant culture, great food and eye-popping landscapes and flying away on a winter angling adventure is a no-brainer. And it doesn't get any more cosmic than South Africa. The Rainbow Nation, of course, is not top-of-mind when you channel winter angling getaways where flats fishing adventures in Cuba and Bahamas or trout-fishing expeditions to New Zealand are on most traveling anglers’ bucket lists. When you think South Africa, Big Five animal safaris in Kruger National Park and other nearby game reserves come quickly to mind. Including a few days of quality game viewing is pretty well mandatory for any complete African vacation.

But after you've filled your quota of elephants, rhinos, hippos, lions, leopards and Cape buffalo = plus sundowners and delicious "braai" barbecues back at camp - Africa also offers an array of angling opportunities. Including trout. Here’s a selection of South Africa fishing destinations that I sampled on a recent trip to Nelson Mandela Land.


To call the Elandspad a "river" is clearly pushing the envelope. It’s one of a six-pack of little rocky creeks that come tumbling out of the Du Toits Mountains that are managed by Cape Town’s venerable Cape Piscatorial Society. Each one is divided into "beats" which are assigned daily by the society and all contain wild populations of rainbow trout after fingerlings were brought to the former British colony in the holds of ships over a century ago. 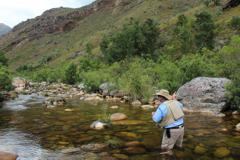 Casting a line on the Elandspad River

With heavy emphasis on "wild". Because while the Africa-bows in these thin creeks are relatively diminutive in size, they make up for it in cunning and guile. As I was to learn from Cape Town guide Tim Rolston on our trip to an upper beat of the Elandspad. South Africa had been wracked by a long and devastating drought when I visited in January and with the temperature topping 30 C most days, the river was running low, clear and warm between vast rock gardens.

Rolston took one look at the 5X, 9-foot leader I pulled from my fly vest, shook his head and proceeded to construct a South Africa Special - a 20-foot concoction which tapered down to a hair-thin 8X to which he knotted a #18 Adams. Then handed back my 3-weight fly rod and asked me to make a few practice casts. It was mission impossible. But after a few disastrous attempts I started getting this bizarre concoction to turn over and we began to fish - casting to the runs between the rocks in classic pocket water like you would in a creek high in the Alberta foothills. Setting the hook with all that ultra-light leader on the water was the next challenge. But eventually one stuck and soon a pretty little spotted stream rainbow lay gasping in Guide Tim’s net. My first Africa trout.

Later the river lit up when a mysterious black mayfly hatch came on the water. But the little trout continued to be cantankerous - rising just beyond the reach of my cast then shutting down as soon as the fly was over them. I guess the drought turned them that way. While the Cape Piscatorial Society streams are easily reachable from traveling anglers staying in the magnificent city of Cape Town they are even more accessible to the historic and picturesque university-town of Stellenbosch - which is also the heart of South Africa’s world famous wine country. Wine tours and trout fishing go naturally together.


Hout Bay - which is part of the greater-Cape Town municipal complex - has been a hold-over and hide-out from the days of the Dutch East India Company’s sailing ships. It’s mostly a fishing port and a spectacular place to live these days. But the fearsome Cape of Good Hope weather hasn't changed and the tuna fishing fleet had been tied up for a week or so waiting for the windy weather to break. When it did I was in David Helfrich’s 28-foot Gecat, plowing through still-heavy seas, making for a mercurial line in the southern ocean where the water turns from grey-green to deep-blue and the ship-board water-temperature probe jumps by 10 degrees. These are the warm waters of the Indian Ocean and here we hoped to find arguably South Africa’s greatest game fish - the yellowfin tuna. 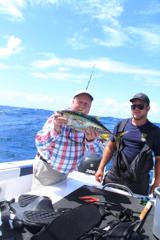 Except finding a marauding pack of tuna in all that ocean is easier said than done. We were 40 miles off-shore and the Hout Bay mountains were out of sight by the time the temperature crested the magic 21 C mark. The mates threw out an array of foot long plugs and lures and we began to troll. And troll. And troll. Later we circled a couple of long-liner commercial fishing boats and a trawler which were cleaning fish hoping that the plume of fish heads and guts would attract the predators. Nothing.

Afternoon was progressing and it was a long run back to base. Time to cut and run. We were trolling back to the bay - pretty well into the no-tuna zone - when suddenly two reels went off. Thoughts of running a chum line and catching a tuna on a fly rod were shelved. Let’s get one in. I grabbed a rod and began working the reel. Soon a solid silver torpedo with neon-yellow fins came over the gunwale. Not the biggest Africa tuna but my Africa tuna.


Other than maybe the iconic snows on Mount Kilimanjaro "Africa" and "snow" are not mutually compatible terms. But in a range of mountains that strikes up the center of South Africa, called the Drakenbergs, there is a serious winter snow zone where winter blizzards block roads, flocks of sheep perish and there’s even a real-snow ski resort. And whenever there are high mountains and cool groundwater seeps, there’s trout habitat. The epicenter of this fishery is the tiny mountain village of Rhodes where the Wild Trout Association manages hundreds of kilometers of creek access on behalf of a consortium of landowners. 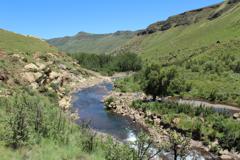 Trout stream in the Drakenberg Mountains

Again the streams are arranged in beats and daily rod fees are paid to the Association. I spent two days exploring several of these streams with Rhodes-based guide Tony Kietzman. But the high Africa sun and the ongoing drought has switched the browns and rainbow off and while we see a few fish, some quite large, the Dragon Mountains (which is what Drakenberg means) had a sting in their tails.


While African angling offers comfortable and familiar species like trout and tuna for traveling fishers, there are others that are uniquely African. Nothing gets more exotic and African than the tiger fish - an aggressive predator that lurks in the big, warm-water rivers that western Canadian anglers traditionally associate with the continent. The Zambezi River - both above and below spectacular Victoria Falls which forms the boundary between Zambia and Zimbabwe - is the tiger fish blue ribbon. Except the "Zam" was running deep, dark and ruby-red when I fished it on the last stop of my Out of Africa angling adventure. 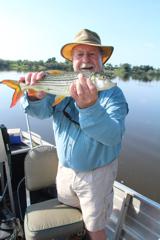 Again the weather was my enemy and my Zambian guide Patrick reckoned a bream cut-plug on a spin-caster was my only hope. And that was apparently slim. But I persisted with a 9-weight fly rod with a black-and-crystal-flash Clouser on a steel-shock-tippet leader. The sun poured down, hippos bellowed in the hippo-holes, as I cast to the pockets in the overhanging bank foliage then stripped the Clouser back with a pull-and-pause retrieve. Much like "pounding the bank" on the Bow River. A hundred or so casts later the streamer suddenly stopped. Tiger on. A silver fish with seriously dangerous teeth lay in Patrick’s net after a good battle.

South Africa also offers surf angling opportunities, dam fishing for trout and bass and a native bug eater called a yellow fish. While self-directed trips are possible for some species, hiring a guide is a constructive way to double down on your success. Ocean angling is pricey because of the size of vessel and crew required, but the dismal state of the South African rand, because of the current political climate, makes fresh-water angling very affordable. Whenever western anglers travel in developing and Third World countries, personal security is always going to be an issue. Here’s where a little local knowledge can become priceless. It also eases a lot of anxiety and exponentially adds to the success of the trip. Because catching fish and having fun is really what it’s all about.