The year’s end seems to be a natural catalyst for reflection, and as I look back at my time on the water in 2016, I’m struck by the fact that very little of what comes to mind first has much to do with actually catching fish. My season opened with a trip to Stauffer Creek.

I don’t know what the heck I was thinking as this spring creek invariably kicks my butt and 2016 was no exception to the rule. I did manage to land a couple small brown trout, but by day’s end I was once again asking myself why I repeatedly torture myself on this stream. What I do remember most from that day, however, is finding a spotted sandpiper nest along the grassy stream bank. These iconic birds are recognizable to anyone who frequents Alberta’s rivers and streams, with their tell-tale bobbing tails and stuttering wingbeats as they fly low over the water. Spotted sandpipers, though our most common sandpiper, are unusual birds in that the roles of males and females are reversed - the females will often mate with more than one male, then leave the males to tend to the nest and young once they’ve laid their eggs. Finding one of their nests is always a treat. 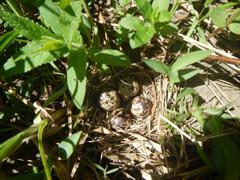 In early July I headed to Manitoba to hook up with a lifelong pal to fish Cross Bay out of Hobbs Resort near Grand Rapids. Our objective was to catch Master Angler-qualifying pike on fly-fishing gear. A couple years ago we accomplished the feat for smallmouth bass and decided then to work our way through the common fish species of Manitoba. In truth, it’s really just an excuse to get away together, but it does help to have an objective.

In three full days at camp we experienced a total of eight hours on the water, at best. It started to rain late on the first day and seldom let up. On those occasions when it did, the howling winds turned the water to a frothy mess, with waves that were simply too much for our little boat. Not that it would have mattered much if we had more boat, though, as casting streamer flies in those conditions was like trying to hold the wind up with a sail.

So we spent the best part of three days holed up in our little cabin, playing euchre, eating and drinking well, and staring wistfully out the window in hopes that that the weather would abate. It never did and eventually we had no option but to drive the many hours back to Winnipeg. We’d managed to catch a few fish when the weather would break, but nothing remotely close to the standards of the Master Angler program. A bust of a trip? Nope, in fact by most accounts it was great in the way that only spending time with old buddies can be, irrespective of what you’re doing together. 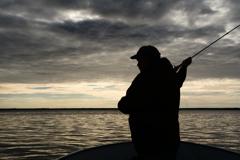 In July I made my annual pilgrimage to the Bow River to fish with Perry McCormick. It was Perry who first introduced me to fly-fishing some 35 years ago, and we’ve fished the Bow together for a day or two nearly every year since. Perry must me my good luck charm as I’ve not been shut out a single time on this river that can be as finicky as it is famous.

I managed to keep my streak alive again this year, picking up a couple rainbow trout on my woolly bugger despite the less than favourable water conditions. What made the trip memorable, however, was being there to see Perry’s son, Carson, catch several decent fish, including a real pretty brown trout, The passage of time is a funny thing and I can still recall fishing the Bow with Perry shortly before Carson was born. Today he’s a good-natured young man who has developed a passion for fly-fishing on his own. The torch is quickly being passed and undoubtedly it won’t be long before Perry and I will be relying on Carson to take us out on the water rather than the other way around. 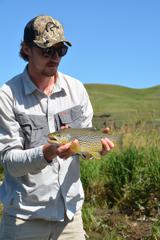 A beautiful Bow River brown taken by "the next generation"

My wife, Jane, and I make time every summer to take three or four days to fish together, just the two of us. She’s become a proficient fly-angler over the years and has learned to love Alberta’s trout streams as much as I do. This year we made Longview our home base and visited a number of nearby rivers, including the Highwood and the Livingstone. Unfortunately, too many years in her youth playing volleyball has left her with arthritic hips that have gotten progressively worse with time. The extent of her pain became apparent this year when she found it near impossible to walk for any length along the uneven, cobbled stream beds. Rather than lamenting what she couldn’t do, she chose instead to set up her easel and paint river scenes while I fished. She’s an excellent artist and, while we weren’t able to fish shoulder to shoulder for a few days as we normally would, we now have some beautiful artwork as a remembrance of this year’s excursion. 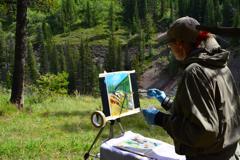 With Jane’s limited mobility this summer (she’s since had the first of two hip replacements) we opted to spend some of our time exploring, seeking new streams and new access points where we might fish together in the years ahead. Under the heading "You never know what you might find when you turn the corner", we rounded one bend to discover a beautiful mature grizzly bear feeding in a roadside berry patch. Grizzlies are synonymous with Alberta’s backcountry wilderness and it’s always a thrill to see one going about its business. You simply don’t get that experience if you’re not willing to explore the road less-travelled when fishing. 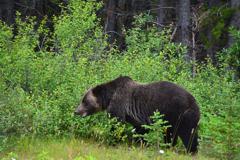 I caught my fair share of fish this past year, perhaps more than my share, though I have to think hard to remember any one of them. Yet I think of 2016 as one of my more memorable fishing years. In my estimation, our fishing success should always be measured in experiences, not numbers or size of fish. I suppose that only serves to underscore the notion that, for many, when we go fishing, it’s not really the fish that we’re after. 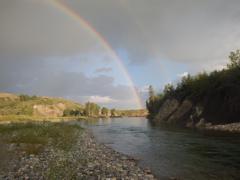 When we go fishing, it’s the experience, not really the fish that we’re after