The big bad burbot are back. Start looking for them toward the end of February, and into the first week or two of March. You’ll find them in the shallows going through their spawning season in sometimes only a couple feet of water. I’ve seen nearly a dozen of them at a single time while looking down an ice fishing hole. And they are accommodating. Get a jig and minnow in front of them and it’s almost a sure thing that a hard strike will follow. It really does not get any less complicated. 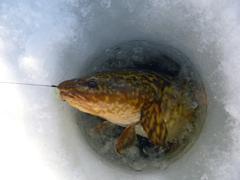 Cool looking and a willingness to bite make burbot a lot of fun to catch!

Burbot fishing is extraordinary, and definitely underrated. When I’m into burbot, it can be fish after fish, for as long as I’m willing to drop a hook. During the spawning season burbot fishing can be great all day long, but if you’re a next level kind of guy or gal, plan to stay late. Into the night in fact. Burbot are notoriously nocturnal and when the sun goes down, the action picks way up. I’ve had nights where I could not count to ten before I had a fish on. 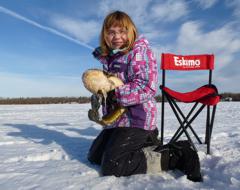 Sometimes tricky to pick up, burbot are a lot of fun to catch!

If there is one thing that characterizes the typical burbot, it’s their affinity to eat fish. They are minnow eaters to the ninth degree, and given the opportunity, a fish meal is rarely refused. There are a couple of tricks that you can use to attract them, should they not be hanging out immediately below your ice fishing hole. 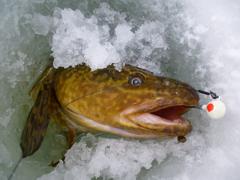 A jig tipped with a minnow will undo most every burbot

In the daytime, the key to grabbing a burbot’s attention is to use an effective attractant, or as I like to call them: attention getters. In the world of burbot, attention getters come in a couple forms. The first is jigging a whopping big spoon. The spoon creates one heck of a lot of flash and dazzle, which will capture the attention of burbot from quite a distance. They will come in for a look but rarely will they flat our smack the spoon. This is a two part process. Part one is the flashing with the finishing blow being a heavy jig and minnow. They come in to the flash of the spoon, then see and smell the real deal (the minnow on the jig) and strike. It’s a super effective strategy. 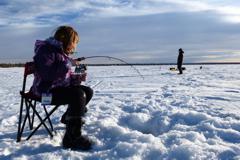 The real deal is to wait them out until dusk and then dark. When night comes, burbot come in shallow and are super aggressive. I put that same minnow I recommended earlier onto a heavy glow jig. Carry a pen light or something similar with you and ‘charge up’ your jig so its glowing nice and bright, then drop it down. Believe me, the glow jig does the trick. It catches fish like stink, especially at night when they have something to key in on. 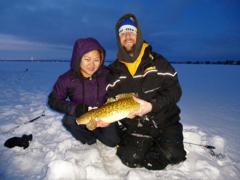 Fish until dark and the burbot will reward you

I’ve never stayed super late into the night using glow jigs, but have stayed up to a couple hours into the dark catching burbot non-stop. You also want to be prepared for the occasional walleye as they also get going during those late night hours.

It is worth setting out a tip up with a herring or anchovy suspended near bottom. Burbot will bite it, but so will walleye and pike, not to mention the odd perch, thereby multiplying your fishing success. The tip up will often tell you who’s biting before your even grab your line. If the tip up goes off and line goes ripping off the spool, it’s very likely a pike. If it gets hit hard and then no line is pulled off you’ve likely hooked a burbot. What about a walleye? They will hit, move a little but not in a hurry. They’ve all got their own biting style.

If there’s one bit of advice I can give when chasing burbot, it’s to put away the steel leader and just tie the line (my favorite being braid in 10 to 20 lb test) directly to the jig. It seems that burbot often times become leader shy. I’m still guilty of using steel leaders, especially where pike are numerous, but if I see burbot rejecting my hook, the first thing I do is remove the leader. 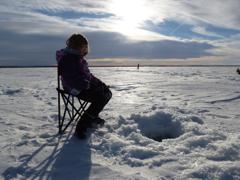 Jigging in shallow over spawning grounds is a great place to be late fall, through March

A couple years back I looked down the hole, only to see a half dozen burbot swirling about 8 feet below the ice surface. I lowered my jig into the mass and immediately had a hit but rather than set the hook I just applied light tension and watched the burbot shake itself silly until it got close to the hole where it spat the hook out. I then dropped the jig back down and it was hit hard again, often by the same fish, and this would go on repeatedly. 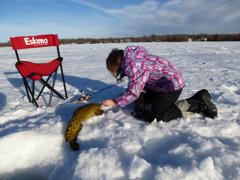 They get pretty big!

Now that’s burbot fishing for you. Big fish that like to eat fish, and are more than happy to provide some great fishing action.