One of the best aspects of the sport of Fly Fishing, in my opinion, is experiencing new waters and the areas in which they are located. Some of my best flyfishing memories are of the people and places I have experienced while exploring new waters. It's pretty easy to get into a rut and head to places where you know the water, access, and methods to be successful and while I often fell into this rut myself, I find that most of my best memories are from the people I've met and places I've been while chasing trout. The size and numbers of fish caught are often secondary, in fact they sometimes don't even play a part in the memory. I was often guilty in my early years of heading out to explore the east slope brown trout streams of Alberta, the Fallen Timber, Burnt Timber and Dogpound were often the destination, the only problem was that Stauffer Creek, my "home" stream lay in between and after a couple hours of driving I always seemed unable to pass it by without wetting a line, often spending the day and never reaching my destination. 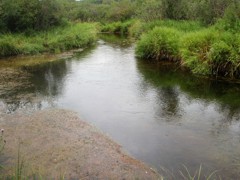 One trip that holds some great memories for me was when one fall I headed to the Jackson Hole area of Wyoming during the famous Jackson Hole One Fly contest. A fund raiser for Trout Unlimited that drew teams from all over the world for a weekend of very friendly competition all to raise money for the local T.U. chapter. While not officially in the competition organizer Jack Dennis had invited me to be a spare angler as more often than not someone was AWOL and a substitute was needed. My fishing partner Bob and I loaded the camper for what was be a two week fishing excursion with the only set item on the agenda, the "One Fly". We arrived in Jackson Hole a few days early and met up with Jack at his shop to say hi, get the rundown of where and when for the "One Fly", Jack surprised us with invites to the whole event, a wine and cheese meet and greet on Friday night, Saturday night supper, a wind-up dinner and auction on Sunday, the whole shebang! 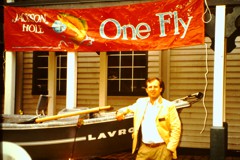 With a couple of days to kill we threw out a couple of river names we might try in the meantime, but Jack had other plans for us. That night at dinner, on a napkin that I still have, Jack drew a map of the Wind River Indian Reservation, a couple of rivers we should try and where to buy our fishing permits. We spent a couple of days catching browns and rainbows on the Wind and Bull Rivers, we saw no one else fishing, only the odd local who gave us a friendly wave, I don't know that we caught a ton of fish but I do remember one good size brown that Bob caught that broke most of the "rules for brown trout", it was in about a foot of water, in bright sunshine and he ate the hopper pattern like nobody was looking and I'm sure he was as surprised as Bob as to what had just transpired.

Brown Trout fishing on the Wind and Bull River in Wyoming

The next day found us invited to fish a spring creek that was located on the property of Ed Opler, who I had never heard of, Jack had arranged it and when we arrived at the beautiful log home we went in to introduce ourselves and find out the lay of the land. There were a couple of ladies at the table, one was Eds' wife, the other Joan Wulff, the first lady of flyfishing in town for the One Fly contest and staying with the Oplers. Ed apologized that he couldn't show us around and wasn’t able to join us for fishing, but had some stuff to attend to. We had a great day of casting dry flies to rising cutthroats, accompanied by Ed’s dog, who liked to sniff every fish we caught. It wasn't until I got home that I found out that Ed was the owner of World Famous Chocolates, yep the same ones your kids and mine, and our grandchildren sell for school fundraisers. Seemed Ed spent 3 or 4 days a week in Chicago and returned to his summer home in Jackson Hole on the weekends. I still can't believe how down to earth he was and how he seemed really disappointed not to be able to fish with us. We never did get to compete in the One Fly that year but there we a couple of extra guides that were also there as back up so we spent a couple of days floating the Snake with a couple of off duty guides, not bad. 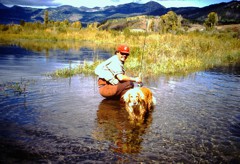 Another memorable trip to new waters was to Silver Creek located in southern Idaho. I had heard about Silver Creek but probably wouldn't have ever gone except I somehow managed to buy two days of guided fishing including accommodations at a Trout Unlimited dinner and auction. The trip was a real eye opener, we were to stay in Ketchum, Idaho (great fishing name) in Sun Valley, which is a playground for the rich and famous, extremely upscale and pricey, in other words way out of my league. Ketchum is a town that everybody there is from out of town, nobody that works there, lives there, the town of Hailey 12 miles to the south accommodates most of the working people and Hwy. 75 suffers from grid lock every morning and evening with commuter traffic. I have several memories from that trip, the first being dinner that night at a steak house, now Idaho is famous for its potatoes and when they said the steak came with one I was not prepared for the size of it. The potato came on its own dinner plate and was by far the biggest spud I have ever seen!

When we met at the fly shop the next day and met our guide there were a couple of things that they did differently. First Jeff took out an order pad and took our request for lunch, we chose the type of sandwich we wanted, type of salad, what kind of cookies, beverages etc. and then went and phoned it in to a local deli, fifteen minutes later on our way to the river we stopped and there were ours lunches individually packed and labelled! Next Jeff started selecting flies for our two days on the water, he explained that he would choose a bunch of flies for us and we would only pay for what we used at the end of the trip, very civilized, though being a fly junkie I think I ended up buying all of them plus more anyways.

The next thing that I remember actually has something to do with fishing, we were on the Nature Conservancy part of the creek where public access is as easy as signing into the log book at the parking lot. As we approached the water it seemed like trout were everywhere, big pods of fish feeding on Tricos, a small mayfly. I wanted to rush in and start casting but Jeff had some instructions for us, we were to select a pod to fish to and approach them from above and send drag free downstream drifts to them, these were extremely educated trout. The last thing Jeff said was try not to herd the pod, huh? Well we got in and started fishing and I soon came to understand the herding part, no matter how stealthy I was the pod seemed to know I was there and they kept dropping downstream ever so slightly, just out of comfortable casting distance. After 20 minutes or so Jeff instructed me to get out of the creek and let the fish return to their area, sure enough I had herded them 30 yards or so downstream of where I had started! He explained that this was quite common and as we spoke the fish sure enough moved back up stream to their original spot, without a guide I would have had them in the next county in no time. 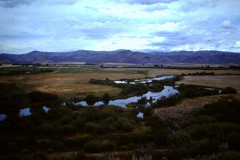 The next day there was a little breeze so Jeff suggested we go to the area downstream from the Kilpatrick Bridge, the area at the bottom end of the Conservancy property. When we arrived the creek was a lot broader and slower than upstream and Jeff proceeded to pull out three float tubes, again scratching my head I asked if we were going lake fishing but he explained that we would be wading as normal but the tubes would keep us from sinking into the muddy bottom and perhaps disappearing into a deep hole. This method proved very successful as while the water was like glass when the breeze didn't blow, every time it did we seemed to connect with fish using the rippled water to camouflage our leaders. The tubes worked great, several times my feet left the bottom, but they proved to be an innovative solution to a fishing problem.

I've had some failures with exploring new waters but the few fails are all outweighed 100 to one by the experiences I've had seeking out new waters. The early years on S.E. British Columbia's' Elk River and its' tributaries, before the crowds and the restrictive regulations would not have been possible if we hadn't strayed away from the tried and true Crowsnest River area. The time Gary LaFontaine showed me the Little Blackfoot river near his home of Dearlodge Montana, small stream brown trout fishing at its' best. This year I have a couple of leads that I plan on following up on, may be epic, maybe an epic fail, but it will bring with the thrill of exploring new places, people and water. 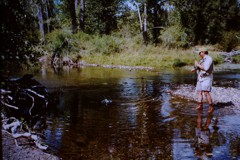