When you get right down to it - for those of us in the angling community who consider ourselves "committed" - there is no bad time to go fishing. That’s why you can go out to any walleye lake near my Edmonton Alberta home on a frigid January day with a blizzard threatening and still find ice-angling tents erected. Or a storm-water outfall in a grim industrial part of town with hefty chunks of spring run-off ice coming down the roiled and swollen North Saskatchewan River. Only to discover a dozen guys hard at it tossing lead-head jigs down the current seam. It’s a mad, mad angling world and I'm glad to consider myself part of it.

But while there is no wrong time to wet a line and spend a pleasant afternoon outdoors - no matter how brutal the conditions - there are some periods that are clearly better than others. Professional bronc riders have branded the week or so leading up to the early July Calgary Stampede - when a cluster of high payday rodeos happen and they can build major points for the championships in the fall - as "Cowboy Christmas". 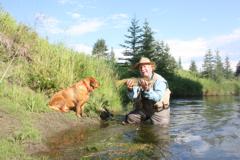 The same can be said for the last few days of May and the first two weeks of June - when the chances of finding free rising brown and rainbow trout in central and southern Alberta’s famous "blue ribbon" stream increase exponentially. It’s what the Brits call "duffers’ fortnight". And in an Alberta fly fishing situation could be christened "Fly Fishers’ Christmas" - where the presents under the tree are both plentiful and rewarding.

I just spent a cold, wet and fishless hour on the bank of Alberta’s iconic spring creek, the North Raven River, and this is hard to believe, I was lovin’ it. Because past experience had shown me that big Green Drake mayflies love these cool, drizzly late spring days. The shower finally passed and I waited for the main event - the moment when the first smoky-green insect with mottled sailboat wings came bobbing down the current. My anxiety and anticipation didn't last long. One olive sailboat rode the riffle I was observing. Then another. But when the third Green Drake began to navigate the current, while it unfurled and dried its newly-hatched wings, it disappeared in a swirl halfway down the run. The rise was on and for the next hour or so before another June shower rolled in and killed the hatch, I was in brown trout heaven with numerous brownies falling for my extended-body Green Drake dry fly. 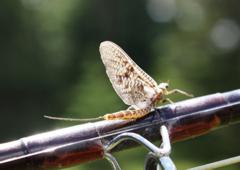 This is the great facilitator of Fly Fishers' Christmas (FFC) and why large and normally shy wild trout feed with the innocence and abandon of hatchery rainbows. Big and abundant hatches of large, economy-sized aquatic insects. There’s a nexus of these emergences during the Fly Fishers’ Christmas weeks. As well as Green Drakes there are also emerging Brown Drakes. Plus massive blanket hatches of lessor mayflies like Western March Brown’s and Blue Winged Olives. But the central Alberta gift-giving doesn’t end there. This is also the season of the stoneflies - including Skwalas and Golden Stones plus the mercurial Salmon Flies - a big black specimen with a rusty red abdomen some as long as my thumb. The egg laying runs of these big bugs can have a truly cosmic effect on trout.

Fly Fishers’ Christmas is confined to but not necessarily exclusive to the last few days of May and the first two weeks of June. It’s a time when the earth is racing toward the summer solstice and the days are ridiculously late and long. By now, at least in the lower elevation trout streams, the local run-off has long since subsided. While on some streams that are sourced in the snowy couloirs of the Rockies, the mountain run-off has yet to get into full swing. The rivers are warm and wadeable and the west central weather assault - known locally as the June Monsoons which can blow out streams for up to a month - has yet to happen. Add to that the abundant presence of large bugs and the angling doesn’t get much better than this.

Complacency plays no role Fly Fishers’ Christmas. The time frame is clearly limited and when you throw in the capriciousness of aquatic insects the window of opportunity can be slammed shut before you know it. So anglers who want to take advantage of this annual bonanza must strike while the iron - and the angling - is hot. When you live in or near trout country placing yourself at the right time in the right place becomes less problematic than traveling anglers who sometimes drives several hours to hopefully place themselves in the middle of a mega-hatch. Sometimes it’s just plain blind luck. Other occasions your best laid plans actually work for a change. Still there are ways of narrowing the odds. Fly emergence charts are available on many trout country fly shop web sites as well as Alberta based fly fishing books. 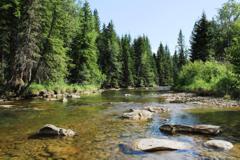 The stream flows data available on the Alberta Environment and Parks Department web site is also invaluable in planning a Fly Fishers’ Christmas vacation. Not only is the information transmitted from on-stream monitoring stations in real-time but the web site also provides historic stream flow graphs so anglers can make meaningful comparisons. And, of course, Fishin’ Hole outlets also post up-to-date angling reports for many streams and lakes throughout trout country - plus many other game fish species. Invaluable information to assist regular Fishin’ Holers planning their next expedition.

One of the most distressing moments for an angler actively engaged in FFC hatch chasing is to arrive at stream side without an effective imitation in his/her fly box. Only to be confronted with a creek alive with big, rising fish. Whether you tie your own or purchase commercial flies, having the necessary range of dry flies or corresponding nymphs in your arsenal is a prerequisite a successful fishing trip. You can’t be prepared for all contingencies but it’s worthwhile having a full range of options. It’s also very important to read the AEP fishing regulations very carefully. There are many streams that are not even open during FFC because of various fish conservation strategies centered around spawning seasons. So it’s imperative to check. Better still keep a paper copy in the truck or google up the current regs on your smart phone.

When all the presents are opened, the big bug bonanza is over for another year on lower elevation streams, with the possible exception of years when there’s a good late grasshopper season. fly hatches diminish and reality sets in. But not everywhere. It’s early August on what’s arguably Alberta’s greatest blue-ribbon cutthroat trout fishery - the gorgeous South Ram River. In the morning the angling had been nearly non-existent. Now the high summer sun has reached the canyon floor and the water is warming up. So is the action. 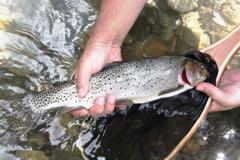 I launched a Yellow Stimulator dry fly at the head of a riffle then watch is progress down the bubble line which separates the heavy current from the soft water closer to shore. The oscillating fly’s progress ends abruptly when a green nose emerges from the maelstrom and smacks it. Fish on. Moments earlier the first natural Golden Stonefly came bobbing down the flow and suffered the same fate as my imitation.

The next day in another part of the mountain river I found cutties feeding on emerging Green Drake mayflies, at a time when the major emergences on down-dip trout streams were now a distant memory. That’s the magic about Fly Fishers’ Christmas. The hatches follow the season into the mountains. Spring comes late in to the high country. So do the super hatches. Chasing big bug fly hatches during fly fishers’ festive season can be a truly sublime experience if you hit it right. It’s Ho, Ho, Ho Humongous!