One of the most confusing aspects of the sport of fly fishing for beginners is deciding which fly to use. They have not yet developed the confidence that comes with experience gained by numerous trips to the same waters at the same time of the year. I recently read where a novice went into several different shops looking for some Blue winged olive mayfly patterns because he had been told that they were the hatch at this time of the year, he eventually became confused when each shop had different patterns to recommend, a dozen patterns for a single hatch is bound to be confusing. The truth be told all twelve would work, and probably all about the same. Many things will dictate success on the stream as much or more than the fly pattern, as Lee Wulff once said "the last thing you should change is your fly". That being said you at least have to be in the ball park with fly size and shape, the rest is up to leader, tippet and presentation. For the purpose of learning I always recommend fishing dry flies, these allow the angler to see not only where his casts are landing but also how they are drifting and hopefully how the fish react to them. 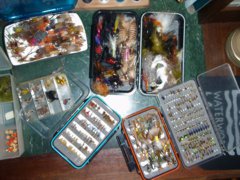 Observation is the number one tactic you will need when you're just starting out, always make sure to take a look around you when you first get to the stream. If the fish are rising look at the waters' surface and find out what they are eating. Getting a sample of the bugs that are on the surface and look at both the size and body colour, these are the key elements of matching the hatch. One of the biggest mistakes you can make is tying on your fly before even getting to the water, I don't care if you were there yesterday or if the guy at the store told you that a certain fly was a sure thing, always take a minute to look around and see what's going on before deciding on a fly. 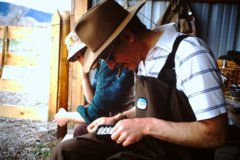 Do your fly selection at the stream, not in the parking lot

Mayflies on the water look like little sailboats due to them holding their wings together and upright while floating downstream after hatching. These upright wings are the first thing that comes into the trout’s window of vision. Mayflies are a family of aquatic insects that range in fly size from very large, size 6, to very small, size 24 or smaller, due to this large size range and the multitude of colours they come in it can be a little overwhelming. If I had to pick a single pattern to imitate mayflies a parachute Adams would be my choice. The parachute in this style of fly refers to the hackle feather on the fly that is wrapped perpendicular to the shaft around an upright piece of material that represents the Mayfly wing. The "Adams" refers the gray body colour that the original pattern sported. This style of fly tied in various colours and sizes can successfully imitate most mayflies the fly fisher will encounter. This pattern has several things going for it, it almost always lands right side up, other patterns can and will land on their side or back. The upright post not only represents the wings of the mayfly but also helps the angler spot his fly more easily on the water, many patterns sport a white post made of yarn, calf tail or feather.


These patterns also float with their body flush in the surface film, giving the trout a good look at. Get yourself a few different sizes of parachute style mayfly patterns in different colours, Parachute Adams, Hares ear, Blue Winged Olive and Pale Morning Duns will get you off to a great start and you will probably be fishing these same patterns for years down the road along with the latest and greatest "craze" flies, Purple Haze, Klinkhammers, Quigleys' or whatever else pops out of some fly tyers brain. 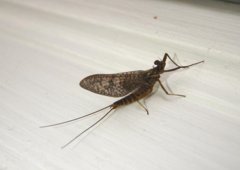 Caddisflies at rest hold their wings over their back like a pup tent. Caddisflies are an extremely abundant insect and can be found on most North American trout streams. These insects are more tolerant of poorer quality water conditions than mayflies. While they also come in a wide size and colour combination they are a little easier to imitate than mayflies because they are often quite active on the water surface, skittering and hopping about, therefore not giving the trout as long a look at your imitation. It is also not unusual to have more than on species on the water at the same time so the trout are seeing different sizes and body colours of insects. Caddis are more active under low light conditions so overcast days, mornings and evenings are prime times to fish caddis patterns.

The go to fly for caddis hatches is called the Elk Hair caddis and almost all dry caddis patterns available are a variation of it. It is tied with hackle palmered through its body to give it buoyancy and a down wing of Elk hair, thus the name. Variations use Deer hair or polypropylene yarn for a wing. As long as it is tied in a down wing style and is a buoyant material it will work. Stimulators are an "attractor" style fly that when used in the proper sizes and colours can also imitate caddisflies. 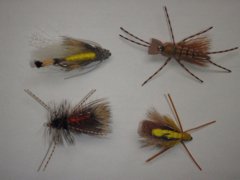 Stoneflies are the third most common aquatic insect that are imitated by the fly fisher. They are however more important as a nymph because of their life cycle. While caddis and mayflies mature under water and remain in the water to hatch into adults the stonefly nymph, once mature, will crawl out on to land and hatch out of the water. This eliminates the vulnerable emerging stage that is so popular with feeding trout. Instead a dry fly pattern imitates when the female comes back to the stream to lay her eggs, which is done by dipping her egg sac into the water. This is when they become available as trout food. The Stimulator, which imitates caddis in smaller sizes, is a good pattern to use for Stoneflies, larger sizes, #6 - #10 in orange are a good choice for starting out. When the adult female Stonefly returns to the river to "lay" her eggs there is no mistaking them. Once described by a friend as looking like helicopters being flown by a drunken pilot! The female dips her egg sac, which is located on her butt, into the water to release her eggs, often landing hard and becoming trapped in the waters' surface, the commotion caused by the dipping of the eggs and the struggle of the trapped bugs is a dinner bell for the trout, which will hit theses flies very aggressively. All this commotion makes it easy for the novice to fish these flies, as a delicate and precise presentation is not required. 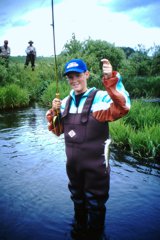 Terrestrials are land insects that somehow manage to get into the water and become trout food. They are never happy to be in the water and will struggle violently, which of course is a dinner bell for the trout. Ants and beetles are two favourite insects for both the angler and the trout, they are available for most of the year and they are abundant along most trout streams. Many patterns are available for both ants and beetles but the novice should look for patterns that has a Hi-Vis post or "hot spot" on them. Since these patterns are quite small, usually black or brown, and float low in the water they can be tough to see. Using a pattern with something on top for the angler to spot makes it much easier.

The one terrestrial that the angler won't need help spotting are grasshopper patterns. If you live in an area that has Hoppers it would be wise to always have some of these patterns on in late summer and fall. Many of the newer patterns out there for grasshoppers are constructed of foam and other synthetic materials that don't absorb water and will float all day long. Get a few with yellow bodies but also make sure and have some with tan bodies, I've probably caught twice as many trout on tan bodied hoppers as the bright yellow ones that fill many of the store fly bins, but if the natural has a yellow belly it's a good idea to match the body colour. The take on hoppers is usually very aggressive and even the novice angler won't have any trouble seeing the rise, as a friend once said "even a blind man looking the other direction would have seen that strike". 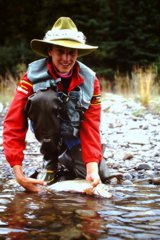 Dry fly success is a thrill for the novice angler

As with most aspects of fly fishing, experience is gained the more time spent on the water. Your casting, knot tying, reading the water and insect identification will all get better. Keep it simple at first then augment your fly boxes with more patterns as you go. So get out as often as possible and take time to assess the situation and you will find that soon everything will all come together and you will catching more and bigger trout.