It all started with Air Miles of all things. I traded in Air Miles to score us a couple tickets to the Calgary Zoo. We heard that they had a baby giraffe, a baby gorilla, and added more exhibits since my last visit 10 or more years ago. Our number one objective was the zoo visit, however, I am pretty good at recognizing other potential activities on these road trips. The ridiculously obvious one here was an opportunity to fish the Bow River which runs right by the zoo. There can be some pretty excellent fishing on the Bow so I stuffed a couple trout rods, a bag of tackle, and some waders into the truck. Now we were set! We were gonna have a weekend trip to Calgary, staying with our good friend Teslin, checking out the zoo and the Bow. 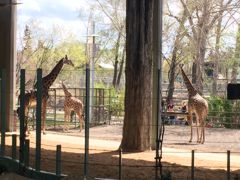 Giraffes at Calgary Zoo and fishing on the Bow

The plan was straight forward. We’d do the zoo Saturday with Teslin and her family and then on Sunday we’d set up shop somewhere on the Bow to see if we could catch some trout. The zoo was outstanding, and we did get to see the baby giraffe, among other animals. My favourite stop was the penguins. They were cool, their exhibit was cool, almost frosty, which was a welcomed change to the +29 C going on outside. We quickly figured out that more than one day would be needed to really check out the Calgary Zoo, so upon leaving, we all agreed to make a return trip later this summer.

Getting back and forth to the zoo meant following the Bow River since Teslin lived in Cochrane, some 30 kilometers west of Calgary. The next morning after a nice breakfast we retraced out tracks toward the zoo watching the river as we went. At no spot in particular, somewhere around the intersection to Memorial Drive, we pulled over. It was park-like, and the river was handy. I did a quick survey and saw one decent pool off a small island, and another pool right in front of our parking lot. Both spots should hold fish, so this is where we would make our stand. We got set up. Angela and I put on the waders while Melanie and our youngest one, Cedar, played on the bank. 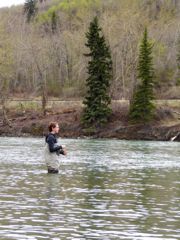 Working the lower pool of the Bow river

We started at the closest pool and while it looked reasonable, we didn’t get any action so decided to wade across to the little gravel island. I then carried Cedar and had fun piggybacking Mom across. Angela was casting small lures at the lower end of the pool while I went to the upper end to toss a strike indicator and streamer. Where the riffle gave way to deeper water looked perfect, so I danced the streamer around the transition zone for a spell when to my surprise, a Rocky Mountain whitefish hammered it. I got it in. It was around 12 inches, and I was happy to have tagged it. We kept fishing, and I resumed my efforts back at the head of the pool. I waded out a little further into the current and a silver flash sharked in from nowhere and was immediately hooked. 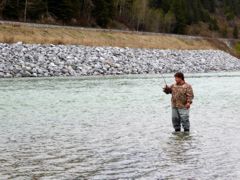 Fishing for Trout on the Bow river

This fish put on a show, jumping once, twice, three times, pulling line from the reel and racing all over the pool. It was a good size, and I figured it had to be a trout, but for five minutes it never came close enough, or swam by slow enough for me to get a bead on what it was. I was patient, and slowly wore out the energy of this feisty fish. When I did get it near, I could see it was a silver rainbow, and in great shape. We took photos and released it. That pretty much made our day. Angela, who came over to check out our catch, decided to join me at the top of the pool. We fished the area hard and I ran into a tiny Rocky Mountain whitefish, which may have been all of 5 inches. 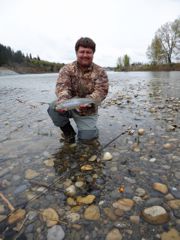 Then a sizable fish swirled 30 feet downstream of me in about 2 feet of water. I cast to the area, but no bite. Then in the same spot another sizable swirl. This got me excited. I carefully waded down to get closer to the fish when it surfaced again. I caught a glimpse of the back and tail fin, which were a creamy golden/yellow brown. "Brown trout!" I thought to myself. It looked to be a good one, probably pushing 20 inches. Given that he flat out rejected my streamer, I tied on a small bead head prince nymph and repeatedly drifted it along the bottom where the fish was rising to see if he’d give it a go. 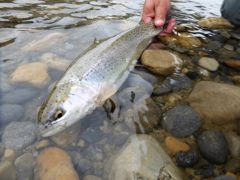 Trip to the zoo and Trout fishing on the Bow river

On the forth drift the indicator started going under and I lifted the rod into solid weight. This was no snag and the weight started moving upstream. I got really excited, and told Melanie, "I got ‘em. It’s a good fish!" I played the fish for some time, neither seeing it, nor gaining much on it. I was anxious to see what it looked like, and how big it was. Finally I got a really good look and realized it was a mountain sucker! I had been fooled but it was a cool looking fish and I’d never caught a mountain sucker before. In any event, it made me feel good that I had targeted and caught that rising fish. We continued fishing for a little while longer but time was running out and we had miles to make heading north to Edmonton. While we did not have as much time on the Bow as I would have liked we made the most of it and now I can’t wait to go back to the zoo again. Maybe next time I’ll book three days for the return trip! Zoo trout are fun! 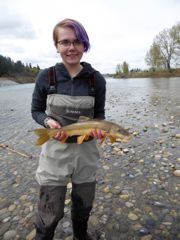 Getting mountain sucker while fishing on the Bow river