In The Walleye Zone

There’s an old expression that goes: "90 per cent of the fish occupy 10 per cent of the water." I’m not sure how mathematically correct that is or whether it even been scientifically tested. But when it comes to Old Walter, arguably the west’s most popular game fish, it’s a pretty accurate rule of thumb. Because once you’ve figured it out you’ll find yourself smack dab in the middle of the Walleye Zone. That mercurial placed where the action can be non-stop and double or even triple-headers are not out of the realm of possibility. Of course, waltzing in a walleye wonderland can be easier said than down. Even with the Alberta’s great walleye renaissance after populations crashed in the early ’90s, - largely due to overfishing, and government fisheries managers imposed strict conservation measures - finding those special honey holes which concentrate fish is easier said than done. Walleye water, whether it’s a central Alberta lake like Pigeon or Lac Ste. Anne or rivers such the North Saskatchewan, because of size can be intimidating. The classic needle in a haystack scenario. There’s no official road map to the Walleye Zone. But there are several simple ways to cut corners and shorten the odds exponentially. 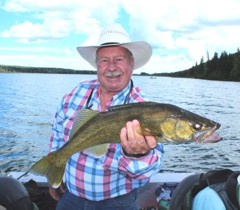 In the walleye zone

My walleye angling buddy Emmerson and I were spending a slow day on South Buck Lake - a west central Alberta walleye lake with a general harvest regulation. We’d anchored over a western shore drop-off that we observed on a hydro map downloaded from the Internet and caught a few. The cruised over to the east side where the eroded bank exposed a rocky substrate, which indicated the potential of that magical key component of the Walleye Zone known as "structure." Walleye, for a variety of reasons love structure. We were cruising mid-lake in about 14 feet of water when a hockey stick suddenly showed up on the Lowrance fish finder screen. 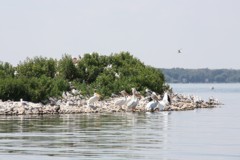 Focus on humps and drop-offs around islands

The classic sign of a sudden change in water depth which walleye anglers have come to recognize as a good place to be. We turned the boat around, re-located the hump, and anchored along the edge. And hooked and released enough bronze backs to save our day. Lake structure consists of humps, submerged rock piles or sharp depth changes along shore lines. Some, like the famous Pigeon Lake drop-off ,offshore from the provincial park, are well known and attract dozens of boats on warm summer weekends. Others are closely guarded secrets captured on navigation aid waypoints. Or with old school triangulation using on-shore landmarks. But the advent of on-board sonar certainly has leveled the playing field. Locate the bottom variation on the screen, back off until vegetation clutter no longer appears on the fish finder (in an Alberta summer that’s usually a depth of at least 16 feet) and it’s "gentlemen start your engines." Finding walleye in flowing waters presents an added element. Structure and depth are still important factors. But to really get in the zone it’s also necessary to read the water the same as trout anglers do on creeks and rivers. Not only do river walleye like drop offs and depth similar to their stillwater cousins they also concentrate where they can get out of the flow. Yet at the same time be close enough to the cavalcade of food sources coming down the current. So it pays to search the river edge for current breaks created by shore line deflectors and backwaters. Ideal spots to spend some quality angling time are eddies, foam mats, pool heads and tributary mouths. Again a depth of 6 feet or more is recommended. Then focus on the intersection of the faster mid-river flow and the soft water behind the current break. Known to river anglers as the "seam." More times than not it will come with a tell-tale bubble line. Just follow the foam and below it you will likely find Walter. While river edge structure is the most obvious, mid-river bottom variations are also well worth a fish. These are a lot harder to spot (again a quality electronic fish finder is an angler’s best friend) but changes in current rate, which ocean flats anglers call "nervous water", will often reveal a walleye hole’s presence. When it comes to finding the walleye zone it’s all about structural differences. Obviously having the mobility of a river runner greatly adds to a walleye angler’s opportunities. But bank anglers can find fast action by also keying on current breaks behind structure.

There seems an endless supply of angling writers offering a multitude of ways to catch a walleye. While I appreciate their ingenuity my method is more organic and has changed little since my youth when I was first started playing Where’s Waldo at the Pembina River creek mouths. Where the perfect set-up is a lead-head jig to which a medium frozen shiner has been threaded. Judging by the minnow tubs stacked in the bait fridge at my local Fishin’ Hole, I’m far from the only one who favours this method. 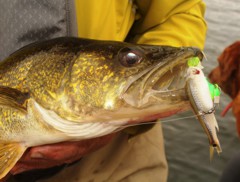 This walleye fell for a chartreuse jig and a frozen shiner

Medium action rods work best for me while a Mitchell-style spinning reel has been a walleye fisherman’s favorite for over 80 years. Alberta walleye are almost found in the same waters as toothy pike so a wire leader cuts down on the number of bits offs and lost lures. I simply tie on a foot or so of "toothy critter" leader material available at tackle shop fly fishing counters. When it comes to line I ditched monofilament in favour of braided line years ago. With walleye fishing it’s all about feel. Unlike mono, braided is all but memory free. My go-to jig colour is chartreuse. Although hot orange or chartreuse with an orange hot-spot are also worth having in your tackle box. For lakes I like a lighter Erie jig design. But in river conditions, especially swift flowing rivers like the North Saskatchewan a heavier "cannon ball" style is better to get into the walleye zone. Which is a few inches off the bottom. While fly fishing for walleye tends not to be as productive as frozen minnows, it’s also a fun way to catch Walter. Fast-sink lines on 8-weight rods will get flies like Lefty’s Deceivers and Woolly Buggers down to the pay zone.

Once you’ve located the walleye zone, the next problem is how to exploit it. Even though ‘eyes are efficient predators, they don’t perform the kind of drive-by mugging of a pike. But prefer to take their bait painstakingly slow. Which requires a cast and retrieve to match the mood. 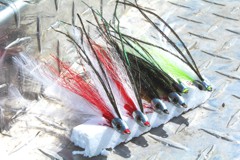 First allow the minnow to rest on the bottom. Then bring the bait in with a stop and go action. Sometimes the strike with be a solid bump. Other days it will be little more than a slight tightening - almost a surreal sense that something is happening. The key is not to be too quick to set the hook. Allow the fish to mouth the bait. Slow and easy does it every time.

Often walleye aren’t interested in a moving bait, no matter how slowly you bring it in. That’s where "suspended suspense" comes into play from a boat anchored over structure. Opening the reel’s bail, allowing the jig to rest on the bottom then suspending with a crank or two of the reel handle is a great way to induce a strike. Again the take can sometimes be as subtle as a whisper. When you’re in the walleye zone, it’s all about the feel factor.