The Pink Salmon of the Squamish River

Two years ago, 2015, was probably one of southern BC’s banner years for pink salmon, and I was there. Cast a float with a weight and a pink yarn fly and the results were guaranteed. There was going to be a pink salmon on the end of your line. It was amazing, fun, and there was a whole lot of catching going on. My friend Wayne Brown and I bought fishing rods in Squamish just to be a part of it. It truly was an outstanding and great time and quite honestly, I could not wait to do this again. 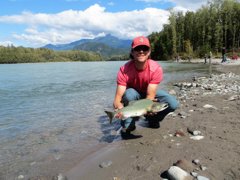 Pink salmon, though, spawn every two years, so that would mean the next run of pinks would be in 2017. That of course being this year. The pinks of the 2015 year were due to return and if it was anything like 2015 run, it was going to be epic. This very event, albeit anticipated, was largely the reason we timed our family vacation to Squamish toward the later part of August, so we could tap into the pink salmon run.

News from the tackle shops on our way there was less than encouraging. There hadn’t been much for rain, and half of BC was on fire. It seemed that the run of salmon was more of a trickle, and that fishing was spotty. In fact, places that historically allowed pink salmon harvest went to zero retention, and the Squamish River, where I do my fishing went from 2 fish a day down to 1 fish a day. This information made available on the DFO website. Upon learning this, I checked my enthusiasm at the door and prepared myself for what could be a dud salmon run. 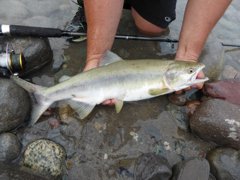 On the coast we had been visiting with family in the Squamish area for a couple days when I got up early one morning. I crawled out of my tent to see the sun had yet not touched the horizon, but it was still light enough to see. Curiosity got the better of me and I jumped in the truck and went for a ride. I checked out a few spots, and then I went back to the Squamish, where two years before I had so much luck. I parked the truck and had no sooner got to the river when I noticed a commotion, and there, not 20 feet from me was a bright silver salmon nearly beached, wallowing about in the shallows. I shook my head in slight disbelief, but I waded over, ankle deep to find this perfect mint silver specimen of a pink salmon. It was stuck there, so I bent over, picked her up, waded out until I was knee deep and gently let her go. She did not race off, but rather glided back out to the deeper water. This inspired me. It was time to go back to camp and grab my rod and reel.

By the time I got back to camp, the whole family was up, so we all made the trip to the Squamish River. The fish were there. They were not present in big numbers, but they were there, and occasionally we would see one splash the surface right in front of us. I started with the bobber and yarn fly, while Angela tried the same set up with a purple bead head woolly bugger. It took some time, but Angela tagged a salmon that immediately splashed about on the surface before getting away. It had us motivated. I then hit a salmon and it as well shook the hook. We kept at it, happy in the knowledge that we were at the river, that there were salmon there, and we were fishing for them. 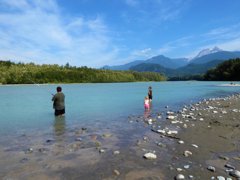 We all made the trip to the Squamish River

I thought back to previous years and remembered one time where I had used a pink yarn fly and just stuck it on the bottom using a weight and about a 3 foot leader. In that spot, I was fishing a slightly deeper run in the river and I suspect the salmon were using it as a highway. I found if I could stick the pink yarn fly there and keep it there, a pink would eventually come by and bite. With this idea in mind, I abandoned my bobber set up and changed over to a weighted set up.

I made the switch and in the first couple casts my fly stopped and I felt weight. I set the hook and surprised myself when the line started to race around the river. It was a salmon. I kept tension on the fish and let it run. It took line, making a few determined runs before nearly running through my legs, a move that had me dancing about trying to keep things untangled. We made it through that and I spent the next few minutes playing give and take as this speedy fish darted back and forth. Then, with its energy spent, it came to shore. It was a beautiful pink salmon, and exactly what we were hoping for. Given that the whole family was ready for lunch, we called it and brought our salmon home. 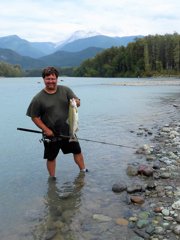 It was a beautiful pink salmon

While the rains had yet to come, some salmon were in the river and we made the most of it. We had a great experience, hooked fish, and even got to bring one home. It was good to be on the river and for me that was the value in this experience. Be it next month or next season, I can’t wait to get back on the coast to fish for our pacific salmon once again. 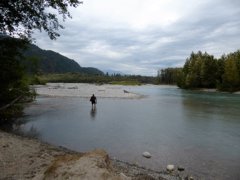