I cut my fly-fishing teeth more than 30 years ago on the Bow River, downstream of Calgary. Under the tutelage of my friend and mentor, Perry McCormick. I learned the rudiments of reading water, selecting flies and tactics, casting, fighting and landing fish on a fly rod. Those early days on the Bow kick-started one of the great joys of my life, casting flies to trout on streams and rivers across Alberta and beyond. These days, I think of fishing the Bow much like I think of a home-cooked turkey dinner. I could never handle it as a steady diet, but I’d miss it terribly if I didn’t get a taste or two each and every year. In fact, all these years later, there’s never been a year that Perry and I haven’t shared a day or two on the Bow. 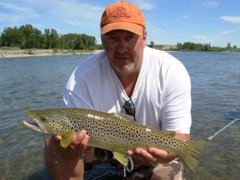 The Bow really came into its own as a blue-ribbon Trout stream through the 70s and early 80s, when such Alberta fly-fishing luminaries as Russ Thornberry, Jim McLennan and Barry White fished it regularly. As word spread of the world-class fishing available, a guiding industry erupted and well-known and/or well-heeled fly-fishers from around the world were visiting to see what all the fuss was about. The legend of the Bow had emerged.

In the early days, much of that fuss centered around the notion that 20 + Rainbow and Brown Trout were eager to rise to dry flies. It likely wasn’t any truer then than it is today. Certainly, many large fish are caught every year on dries, but the bread and butter of fishing the Bow has always revolved around fishing streamers and nymphs. 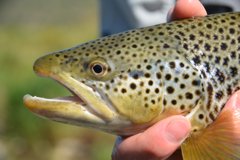 20 + Brown trout are a regular occurrence on the Bow

There’s no disputing the Bow is well-deserved of the accolades it’s received. All you have to do is check out the number of drift boats floating on a daily basis between the city and Carseland to know that its reputation is intact. It’s an issue of pure biomass. The City of Calgary releases significant amounts of organics into the river and the downstream result is abundant plant growth that harbours untold numbers of invertebrates. The insects and other small life forms that are the basis of a trout’s diet. With all that food at their disposal, it’s little wonder that trout populations have blossomed.

To be sure, the Bow isn’t infallible. Periodic flood events have a nasty habit of changing the river’s course, wiping away bank and instream habitat, and even age-classes of young fish, all while providing the necessary task of revitalizing the river. Even in the poor years, the Bow manages to sustain a meaningful recreational fishery. In 30+ years of fishing with Perry, I’ve never been shut out on the Bow for even a single day. 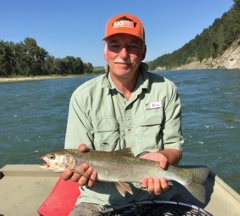 The author with a typical rainbow from the Bow

To those who haven’t had the luxury of fishing the Bow under the guidance of an experienced Bow River angler, the river can be an intimidating piece of water. Where to start? And how? Even those who find fish with little difficulty on smaller rivers and streams can be awed by the sheer scale of the Bow. It’s really no different than any other trout stream, however, if you break the river down into bite-sized pieces. Trout on the Bow have the same basic requirements as those on small streams, namely oxygenated water, cover to escape the current and a reliable food source. For the most part, you can assume that the third essential is the least of your worries; there’s no shortage of trout food in the river. Except for the warmest parts of the summer in the hottest years, which unfortunately we’ve witnessed recently, the river is fairly well oxygenated, at least to the point that it’s not limiting to trout. So whether you’re floating the river or walking and wading, all you really need to do is focus on finding suitable holding water. 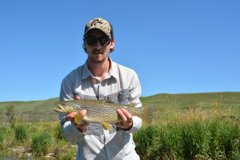 The Bow’s banks offer the greatest escape and holding cover for trout, so you can’t go wrong if you fish only the river’s margins. Focus on the water along steep, grassy banks and on the outside turns of natural bends; where the water is deepest, trout are sure to be found. In fact, if you did nothing but cast streamers along likely sections of the bank day in and day out, you’d catch more than your share of fish. The trick is to get your streamer down in the water column, so experienced Bow anglers weight their streamers and/or leaders, or fish with sink-tip lines. Pound the banks often and long enough and some of the Bow’s magnificent Trout are sure to reveal themselves. 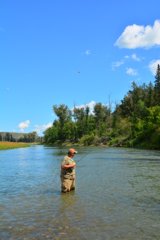 Nymphing the side channel riffles will nearly always produce fish

Good nymphing water isn’t as plentiful, but there’s no shortage of it on the Bow. While some prefer fast sinking lines and short leaders, the vast majority of Bow nymph anglers opt for a floating line, a strike indicator, a 7 ½ - 9-foot leader, and a weighted fly. You can fish this rig blind on nearly any stretch of the Bow, but it’s most productive where you can accurately predict the lie of a fish. Best waters include any of the numerous side channels, along current seams, through the choppy water where the flow picks up speed rounding an island, or anywhere there’s a natural depression in the river bottom. In all instances, the secret to success is the same. You have to get your nymph to the bottom wherever you think a trout may lie. That means casting upstream of where you suspect a trout to be, giving your fly time to sink to the bottom about the time it passes over a fish. 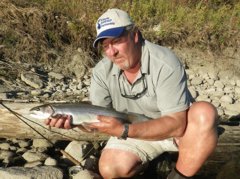 A fine Bow River rainbow trout comes to the net

Just so there’s no misunderstanding, dry fly fishing is alive and well on the Bow, although it can be hit and miss. Casting dries blind is not a particularly effective tactic most days, but spot-and-stalk casting to rising fish can produce spectacular results. Let’s face it, having a broad-shouldered Trout rise to your fly is the epitome of fly-fishing excitement. Thirty years after I first fished the Bow, it remains a favourite. If you’ve never fished this remarkably productive river, you owe it to yourself to do so.