The Bull Trout of the Athabasca

I know the area well. Snow-capped mountains with a ribbon of crystal clear water that carves around a rocky bend and settles into deep emerald green pool. A pool so deep I have never seen the bottom, but I know what lives there. There are always bull trout in this pool. It’s the glory hole, and comes as close as you can get to the guarantee of fish. I’ve made my annual pilgrimage to this one piece of water going on 10 years now, and never, not even once, has it disappointed. I have always caught bull trout here. This pool being on the Athabasca River in Jasper National Park. 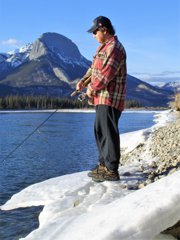 Within Jasper National Park boundaries, parts of the Athabasca River are open year round, and other parts are open through much of the winter, but close seasonally at the end of March. All of the river is home to bull trout and Rocky Mountain whitefish, but it is the bull trout I come for. On a warm day in January, February, or March, I will typically have one of the largest rivers in Alberta all to myself. I walk the river banks and toss lures into the deep spots and prospect for trout. While bull trout are found throughout the river’s length inside the park, come winter they prefer to call the largest deepest pools home.

Sometimes good pools can be a mile or more apart, so there is a lot of walking involved, and because I have learned where a lot of the better pools are, I will car fish them. That is, I’ll park at one spot where I know a few pools are and I’ll fish those. If the fishing is decent, I could be at these pools all day, but if the fishing blanks, then I’ll hike out to my vehicle, travel a few kilometers down or up the road to where I know other pools are and try there. 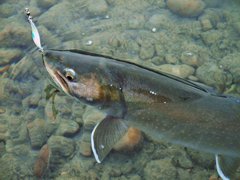 One of my favourite spoons, the clown pattern, is very effective on bulls.

While bull trout are the top predator in the Athabasca, save for the very rare pike, bull trout are not all out feeding machines come winter. Sometimes it takes changing the hook once or twice to find something they like, and I’ve found that the slower and deeper I can present something, the more bull trout I end up catching. My favourite hook has been the spoon with a single hook on the end and about 3 to 4 inches long. My favourite pattern is the clown pattern, which is white with the some hints of yellow, pink, blue, and purple mixed in. I suspect it kind of resembles the colour pattern of a whitefish, so it gets a little more attention.

That said, a plug is also fantastic at generating bites, but the problem I have with plugs are the number of hooks on them. Bull trout must be released and the typical plug has at minimum two treble hooks, which can cause more damage to fish when they bite. This is why I shy away from plugs even though they are effective. In the last few years I’ve been trying out a new method for me and that’s to roll a whopping big salmon sized streamer fly near bottom. Some people call them bucktails and many of the largest flies are made of polar bear hair. These big fish imitating flies are outstanding at looking like a whitefish and with the aid of some weight, I can slow roll the big streamers right on the bottom and the bullies are quite eager to pick them up. These flies typically have a tandem hook set up, but I find the 2nd hook not necessary, so I remove the trailing hook. I feel I don’t lose anything on my ability to hook up and it makes handling and release of the fish much easier.

While bull trout grow quite large, I’ve rarely hit the big guys in the middle of winter. Whether it’s because I fish the wrong spots, or use the wrong lures, I rarely tag a bull trout bigger than 24 inches. 16 to 24 inchers though, are the norm, so the average size is quite good. 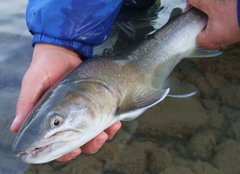 A prime, and typical bullie

However, if you are my good friend Leonie, in the last few years she’s managed to tag at least one chunker a season. The last two big fish were both around 30 inches each and about 10 pounds. A number of seasons ago, in the fall I had an absolute beast follow my extra-large size spoon in. I had already caught a couple of 7 to 10 pound fish that day, but this fish was head and shoulders a full size class bigger. He came in and tracked my spoon right to my feet, where he turned and glided back out to the safety of deeper water. He was bigger than 3 feet, easy, and probably pushing 15 pounds. I didn’t get him to bite, but just seeing such an impressive fish keeps me motivated to continue casting, if for nothing more than the chance to hold such a magnificent fish in my hands. 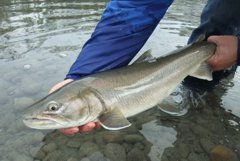 I go to the mountains each winter because there is solitude. I go the mountains because of its sheer beauty, and I go to the mountains for the chance to breath in the fresh air and cast a line for trout. Trout that are native to the river, and grow to sizes that can inspire the imagination. It’s a pretty special place, which is why on a warm day this February or March, I suspect if you looked hard enough, you will find me there, rod in hand, casting for the jewel that swims beneath. 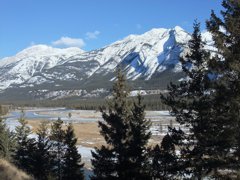 Just a spectacular place to cast a line!