If anyone had told me 38 years ago, after fishing my first graphite fly rod, that I would be considering buying a fiberglass fly rod nearly forty years later I would have told them they were nuts. Graphite was so much lighter, easier to cast and was way more powerful than fiberglass. My first graphite rod was one I built on an Orvis blank, this rod was one in the "Western Series" from Orvis and replaced a cheap fiberglass model. It was about a quarter of the diameter of my fiberglass, the maker of which I can't remember and has long since gone to the fly rod graveyard. Most fiberglass rods were 6,7 or 8 weights and as I recall about mine was that it was a 7 weight that weighed a ton, was the diameter of a good Cuban cigar and had the action of a buggy whip. Casting for any length of time was a chore. Things have changed and even though I own far too many fly rods, my next fly rod is definitely going to be glass. If you love to fish small streams for trout, maybe you should consider one too. These new rods are nothing like the old ones, having never really gone away, the few dedicated rod makers who worked with fiberglass have continued to evolve and perfect these rods. They are now light, aesthetically pleasing and best of all relatively inexpensive. 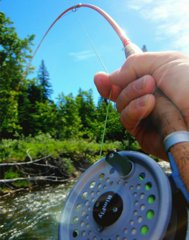 Fiberglass fly rods have made a comeback.

Fiberglass was a replacement for bamboo as a fly rod material as it was inexpensive, easier to work with and had similar actions. For many years fiberglass ruled the fly rod world and then graphite came along and by the early eighties the mass migration to graphite was well underway. Both manufacturers and anglers flocked to it largely due to weight differential, graphite being much lighter. Fiberglass rods and rod makers did not disappear and anglers still continue build, buy and fish fiberglass rods, but graphite overshadowed them while becoming stronger, lighter, and faster, capable of casting a fly 60, 70, 80 feet with a single backcast, hardly necessary for most trout fishing applications. Fiberglass also tends to be less expensive than graphite, the Echo 6 foot 9 weight I have my eye on is only $270.00 Canadian. There are lots of choices out there as many of the "big" name manufacturers and lots of smaller ones have fiberglass rods in there line up. 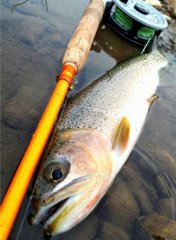 Fiberglass has never really gone away but until 3 or 4years ago I never really payed much attention to it. Many anglers started to notice that fiberglass rods had become much lighter and a joy to cast, with much slower actions than the "cannons" coming from the graphite side of things. I always had to laugh when the presenter at a Sport Show would cast his fly over the curtain at the far end of the casting pond during their demonstration to the oohs and awes of the crowd, good for show, but mostly useless in most trout fishing applications. I have always preferred "moderate" action graphite rods, my Sage RPLs' have always been my favourite, and their old Light Line series is still a favourite of many anglers even though they are much slower in action than most manufacturers models these days. The truth be told I have a hard time casting some of the fast action rods of today and I’m far happier with moderate action rods. I once had a friend who tried out one of my rods on a day on the Bow River and he loved it. He immediately went out and bought the latest, fastest and most expensive rod from that manufacturer. He was never able to get that rod to work for him and ended up selling it. The reason he liked mine was that it was a moderate action rod that needed a much slower casting stroke and was way more forgiving than the cannon he bought.

Why fiberglass? Well for one thing fiberglass rods do the work for you, which is the way it should be. The whole rod is working (flexing), not just the top foot or two. The casting stroke is slowed way down, letting the rod do all the work, as fly rods were designed to do in the first place. Fiberglass is also a tremendous shock absorber. The angler has the ability to use lighter tippets and still land large fish just as quickly as graphite, without breaking off. This also puts the "feel" back in the fight. There is something about a rod bending from "butt to tip" that feels good. Most beginner casters would benefit from learning on fiberglass rods as you can actually feel the rod load on both forecasts and back casts. It's much easier to develop a good casting stroke and timing this way. The slower full flex action of fiberglass also works great for roll casting, an underutilized cast that makes fishing smaller streams much easier. Especially when the willows can wreak havoc with your backcast! A lot of these rods are being produced in shorter lengths 6' - 7" which also helps in these tight quarters. Anglers will also find that fiberglass rods also mend very well and will even throw nymphs and indicators with ease.

Fiberglass rods put the feel back in the fight.

Without getting too technical there are two types of fiberglass used for fly rods; E-Glass is which is used in electrical applications and S-Glass, which is used in structural applications. E-Glass has a lower modulus than S-Glass and therefore should be slower but rod makers are able to work their magic with lengths and tapers and all the other variables to achieve actions from slow to fast and everything in between using both either material. There are even some bigger weight rods on the market. Echo has a series called Bad Ass Glass, 9 foot fast action rods in 8,9,10 & 12 weights. These are designed for big water and big fish such as Tarpon, Albacore, steelhead etc. The cost of these rods makes them attractive, about $350.00 Canadian for the 8#, ask anyone that has bought a saltwater fly rod lately and they'll tell you that is a smokin' price for a big fish rod.

Fiberglass rods are not only functional but also beautiful. Since fiberglass is clear the resin can be dyed every colour imaginable and, because of the translucency, look gorgeous. Graphite is grey and the blanks are painted, and even though a lot of them are quite handsome, they don't have that brilliant translucency that fiberglass has.

Fiberglass can be dyed any color making for some gorgeous rods.

Along with the rods line manufacturers have also begun producing more and more lines designed specifically for them. Lines like Scientific Anglers "Heritage" and RIO's "Trout Light" series, while they will work on all rods they really shine on fiberglass rods. Double taper lines are also coming back into vogue for use on these on these lighter rods. The angler now has many manufactures, tapers and colours from which to choose from. Graphite still has its' place and most anglers, including me, will continue to buy and fish graphite rods. But if you're looking for a rod that will land dry flies with delicately and accurately, mend and roll cast with ease, then fiberglass may just be the ticket. Oh yeah don't tell my wife I'm looking at buying another fly rod.