When folks generally think about super bugs they channel disease, pestilence and suffering. Fly fishers, and especially those who patrol Alberta’s Eastern Slopes trout streams, northern boreal grayling rivers and the province’s prolific pothole trout ponds, see bugs in an entirely different light. They visualize large, free-rising fish, impressive catch rates and some of the best fly fishing of the angling year. Super bugs have an energizing effect on super fish. With most super bug angling taking place on the surface, the presence of these prolific and over-sized insects produces great visual angling action. 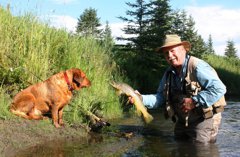 Super bugs can bring out super fish like this brown trout that fell for a Hopper pattern.

It’s just a matter of being in the right place at the right time with a fly attached to your tippet that effectively imitates what’s present on the water and the air above it. Of course, that’s easier said than done. Often hatch chasing can be the fly fisher’s equivalent of a night at the casino. When you persist and sometimes get it right the fish can be ridiculously easy and the angling sublime. Casting to fish that you can observe actively feeding is one of the great pleasures of fly fishing. It takes away most of the mystery and uncertainty that running nymphs under an indicator or swinging a streamer brings. You’re fishing a fish you can see. Here’s a check list of the biggest and the best of Alberta insects that trout, grayling and mountain whitefish love to eat.

Occasionally fly fishers are confounded with a mystery hatch, fish feeding on insects so microscopic that unless you get down at surface level you’re not even aware that they are present. This is not the case with the super-sized mayflies called "drakes." These are the large mayflies that anglers will encounter on our foothills trout streams and are largely responsible for Fly Fishers Christmas, the short feeding frenzy in later May and early June when a number of super bug species are on the water. 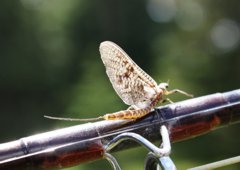 Our drakes come in two shades. One a mahony-colored insect with a mottled brown wing and the second a smoky olive bug known to fly anglers as the Brown Drake and the Green Drake. Both prefer to emerge on overcast, drizzly days, although that not always the case, often in the evening. They are exquisitely beautiful creatures that drift slowly down the riffles and feeding lanes of low country brown trout streams like the Red Deer and Raven rivers. The trout line up along the current seams and bubble lines and pick off the insects as they ride the surface tension, drying their winds. These hatches, when they’re really on, can be prolific, lasting for several hours. As the season progresses anglers can extend the hatches up dip. I’ve encountered green drakes hatching on the McLeod River in early July and the South Ram River on August long weekend.

Stoneflies are the ugly ducklings of our super bugs. While drake mayflies are the Italian sports cars of trout food, the stoneflies are the dump trucks. Fortunately Alberta trout, grayling and rockies love eating dump trucks and feed on them aggressively when the stonefly egg-laying flights are on the water. While there are other stonefly species, like the snow-bank-crawling early browns and the skwalas, the two that achieve super bug status are the golden stonefly and the massive (in insect terms) salmon fly. Both appear on the west central brown trout streams during the Fly Fishers Christmas period and follow the warm weather into the mountains like the super mayflies. Stonefly nymphs don’t ascent the water column like their mayfly equivalents, and ride the current waiting for their wings to become operative. Thus making themselves vulnerable to becoming a trout snack. Instead they crawl to the river’s edge and metamorphose on stream-side rocks where their nymph shucks are a prime angler indicator that a stonefly hatch is underway. Stoneflies, as their name implies, inhabit the rocky sections of foothills and boreal rivers. So focus on rock gardens, stony runs and cobble riffles. Since most higher-altitude streams are freestones, that sometimes involves a lot of river. Because stoneflies become vulnerable to trout and grayling on their egg-laying runs, where they skim across the stream surface causing a commotion, a dragging fly is not necessarily a trout turn-off and a drag-free drift isn’t a prerequisite to success. Some anglers on stonefly days fish flies like Stimulators and Sofa Pillows as down and around waking flies, simulating the egg-laying antics of the natural. The Golden Stone, as the name implies, has an antique-gold body and is the more prolific super stone fly. I’ve encountered them from the Crowsnest Pass to the House River near Fort McMurray. The Salmon Fly, whose abdomen matches the colour of a barbecued salmon fillet, next to maybe dragon flies are our largest insect. 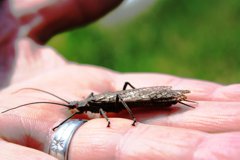 Salmon flies are provide trout, grayling and whitefish with a big bite of protein.

It’s also a most mercurial bug and makes hatch chasing, especially for the travelling angler, an article of faith more than a certainty. Not all foothills rivers have salmon fly hatches either, further lengthening the odds. Keep your eye on the stream-side spruces, where salmon flies hole up before going onto the rock gardens, for over-sized four-winged bugs they fly like they are on training wheels. Trout have long memories when it comes to super bugs and will still hammer salmon fly imitations aggressively even though there are no visible adults on the water. But on that occasional day in June when the stars align and there are giant rusty red insects on the water, the action can be cosmic.

Grasshoppers, of course, are not stream-born insects. But still play a significant part in an Alberta Trout’s diet. Especially later on in the season when other super bugs have either completed their life-cycle for another year or have retreated to mountain fisheries. Whether because of wind gusts or just plain bad luck, hoppers fall into trout streams frequently enough for the fish to key on them. Because a grasshopper offers trout a big bite of protein, it also brings up the big guys. Prairie rivers, or sections of others that flow through water meadows are prime hopper country. The presence of a "hopper bank", a stretch of stream when long grasses reach down to the water surface, are prime habitat for hopper fishing. 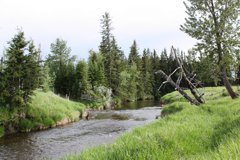 Brown Trout in particular like to lie tight to the bank waiting for a hopper to dislodge from the grass and fall into the river. A fly angler can induce a strike by bouncing a hopper imitation off the grass, allowing it to smack seductively onto the surface. Another situation where a soft landing and a subtle presentation is not necessarily a precondition to success.

Chironomids are a bona-fide Alberta super bug even though some varieties are among the smallest insects that fish feed on. They are super because they are super prolific, although some like the chironomids fly anglers called "Bombers" are relatively large. Chronies are super because not only are there so many of them they hatch from ice-out to freeze-up and are even present year round on some of our open water Trout fisheries like the Crowsnest and Bow rivers and the Red Deer River tailwater. They are the go-to Trout food on our pothole fisheries, where Rainbow Trout, if allowed to survive three or more stocking cycles, can grow to "hawg"-size proportions in the highly eutrophic water. Unlike other super bugs, chronomids are rarely fished as an adult dry fly. The mysterious art of chironomid fishing focuses on the suspended pupae fished static below a strike indicator a few inches off the pond bottom. Similar in many ways to winter lake whitefish angling with wireworms. Chironomids have revolutionized angling on Alberta’s small stocked lakes and ponds, especially after Alberta Environment and Parks initiated a delayed-harvest "quality" Trout fishery policy a few years back following pressure from Alberta fly fishers. Chironomid pupae come in numerous sizes and colours. Many hard core chironomid anglers carry a suitcase-sized fly box of patterns.

These are also super bugs that come in relatively small packages. They earn their stripes because of their huge numbers in the air and entering the water while participating in their mating "falls". They are also shoulder season insects cranking up angling opportunities at a time when other fisheries are winding down. Unlike chironomid still-water fishing, the angling doesn’t necessarily occur from an anchored boat but by cruising along cattail edges or water lilly bays, casting toward the vegetation then bringing the fly back in a strip-strip-pause retrieve to mimic the swimming adult. The hits are violent and break-offs can be frustrating if you don’t beef up your tippet strength. The falls often happen on calm, blue-sky fall days where the gorgeous pond-side fall foliage can easily become a distraction. 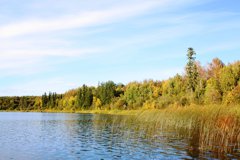 A perfect day for a backswimmer fall on Dolberg Lake .

A sign that a flight is underway and the action is about to heat up occurs on the pond surface. Which will suddenly be peppered with what looks like rain drops as the returning adults dive bomb the water to break through the surface tension.

There are many other organisms that Alberta Trout, Grayling and Whitefish feed on from minnows and leeches to caddis flies and numerous small mayfly nymphs. More days than not anglers are limited to these lessor Trout foods to attract to fish’s attention. If luck is not with you can burn up many tanks of gas chasing big fly hatches. When you finally hook up with an emergence of one of Alberta’s seminal super bugs and the big boys and girls shed their inhibitions, the fishing can be awesome.