With the prolific amount of fly patterns available today it's no wonder that fly fishers, especially new comers, get confused. Gone are the days when the only flies you needed were a Royal Wulff and a Hares’ Ear nymph to catch fish. Angling pressure has certainly added to the selectiveness of trout on many waters. Ask anybody that has fished for the cutthroats of southern B.C. or Alberta for any length of time and they will tell you that they have gotten very selective over the years. Gone are the days when a size ten Green Drake was all you ever needed. The waters that contain the most trout also have the largest concentrations of trout food, more food equals more fish, bigger fish and therefore more anglers. These fish see flies, both real and artificial, passing by continually and develop a wariness of anything that's not quite right. Another factor in these productive waters is during strong hatches these fish have thousands of naturals to choose from, your fly might be a perfect imitation but your odds go down when there are many naturals on the water at the same time. If there are a hundred naturals in a square yard of water casting your imitation in just makes it a hundred and one. 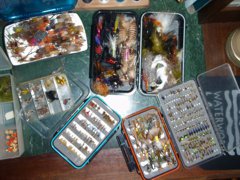 The number of different fly patterns out there can make pattern selection hard.

One method that will sometimes work when all else fails, is to un-match the hatch, instead of trying to imitate the hatching insects, give the fish something different to look at. I learned early on from Jim McLennan that fishing a Red Ant pattern during a Trico hatch on the Bow River will often draw strikes, they are a lot easier to see than the masses of size 18-24 Tricos on the water, and the fish seem to like a little "side salad" with their meal. While size is critical in matching the hatch, when un-matching it is not necessarily so. When a hatch is occurring I will always try to match it, if unsuccessful at first I always go one size smaller, if this doesn't work, and I'm confident I have the right pattern I will either target a different fish or I will un-match the hatch. A Royal Wulff is one of my favourites, it is a fly that works both as a searching pattern when there is nothing on the surface and as a unmatch pattern when there is. As a general rule your fly should be the same size as the hatching insects, but a little larger is acceptable. 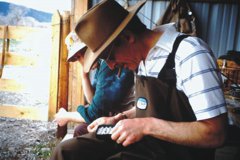 Another thing that an angler can do to make his fly stand out from the crowd is to fish a different stage of the insect. While hundreds of perfect Mayfly duns floating by may seem to be what the trout are feeding it's not always the case. A closer look may reveal emerging insects, cripples or even a different insect that you may not have noticed due to size or abundance. When two insect hatches occur at the same time it is easy to assume the fish will be eating the more prolific of the two but that is not necessarily the case. Renowned fly tyer A.K.Best ties a fly called the Clumsy, a mayfly dun pattern that represents a dun that has just fallen on its' side. These are duns that are not cripples that are stuck in the shuck, or ones that have been blown over, they are just clumsy. Trout being the predators that they are they will always take the easy meal first. You can tie a few duns using this pattern or simply give an existing fly a 45 degree twist on the shank so that it rides on its' side.

Terrestrials, land born insects that aren't supposed to be on the water, will often work not only when there's nothing hatching but also during hatches of other insects. Ants, beetles, crickets and grasshoppers will often draw strikes on fish that are feeding on hatching insects. The fish are used to seeing these on the water and will often interrupt their feeding to routine to eat them. A fish that is feeding steadily on small mayflies will often break routine to gobble up a big juicy hopper. Presentation can be just as important using the un-match method as when you are matching the hatch. A fish feeding steadily on mayflies is not going to go too far out of its' way to eat your imitation. Also remember that the closer to the surface the fish is holding the smaller its' field of vision is, so your drift should be as close to the feeding lane as possible. 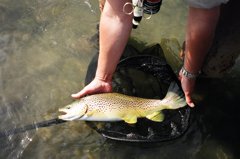 Cheater flies are not really un-matching the hatch but rather, as the name implies, using patterns that "cheat" on the original. Instead of using a size 22 Trico try tying two Tricos patterns on a larger, say #16, hook. Easier to see than the smaller patterns and an increase hook gape will also add to hooking success. When insects are hatching in large numbers the trout are used to seeing "clumps" of two, three or more flies. Midges are a great example of this and the Griffiths Gnat fly pattern imitates more of a cluster of midges than just a single fly.

Another way of un-matching the hatch is to impart action not resembling what the naturals are doing. Most of the time you will be faced with insects that are dead drifting, matching the natural and it's action is what is needed in most cases to fool the fish. Adding action to your fly is another way that can help draw strikes, skittering the fly can help draw attention to your fly, differentiating it from the naturals. To a trout movement means life, just don't overdo it, a small twitch is all that is needed. Flies with lots of hackle such as renegades, stimulators or skating spiders can be twitched and skittered on the surface in a tantalising manner that might help draw a strike. Insects that naturally move on the water such as caddis will also work well at times. Terrestrials are another fly that movement helps, these land insects are not meant to be on the water and they will struggle vigorously trying to escape.

There is nothing more satisfying than spotting a rising fish, figuring out what he is eating, choosing the correct fly, and fooling him into striking. It can also be the most frustrating situation to watch a fish constantly rising and not be able to fool him, next time try un-matching the hatch, you might just find that the trout has a sweet tooth for Royal Wulffs!