It was early morning, a misty fog clung to the surface of the lake, nary a breeze to be felt. The rest of my crew was asleep, but here I was awake. I sauntered to the lakeshore, a couple fishing rods in hand and a small bag filled with tackle strapped over my shoulder. The lake was perfect calm. I ever so lightly eased the boat into the water and slid away. The momentum from my launch carried me a good 30 feet out. I let the boat come to a standstill and all I did was watch. The shoreline had my attention, for something was going on. 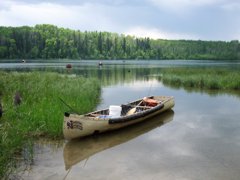 A great day to be on the water

Below that placid surface, bulges of water pushed about in water so shallow, I could scarcely believe it could hold a fish. But the signs were undeniable, and then every so often a spotted dorsal or tail fin would poke though and I could watch the trout finning about, searching for food. I was amazed at how bold and how shallow these trout were, when undisturbed. Then I did something that was completely out of character. I left the fishing rods be, and all I did was watch. Looking down the shoreline and taking my time, I could distinguish a good half dozen trout up shallow, their fins poking through the surface, wagging lazily in the air. It showed me beyond any doubt that, when given the opportunity, a trout will come in shallow to feed. 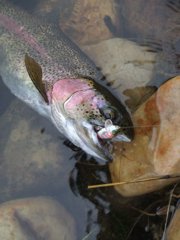 Fooled this early morning trout tossing a minnow imitating plug in the shallows.

Then there was the time I was trying like the dickens to catch a brown trout. The lake I was fishing had suckers, perch, and browns in it. I like to catch brown trout, but these fish are notorious for being tough biters, so my trick is to wait them out. I would spend time fishing for browns, and if I wasn’t getting much for bites, I’d switch it up from time to time and chase perch. Schools of perch could be found deep and shallow. In the shallows I could clearly see the schools with the naked eye, and they were fun to catch. I would toss a tiny jig or fly tipped with a few maggots and I was in business. Sometimes when I was fishing for perch, suckers would also come by, making for an entertaining experience. 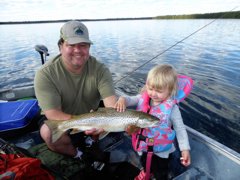 Be observant, imitate what the fish want and soon you’ll be catching more.

One time while I was doing exactly this, fish from everywhere exploded into hurried flight. Puffs of muck blew up off the bottom here, there, everywhere. Somewhere in the murk an unseen brown was attacking. I cast a plug looking for a bite, but this time round I didn’t connect. This one event, however, confirmed to me that if I was hoping to catch a brown trout, fish imitating plugs would surely be the way to do it. Later that day, Melanie and I came across some feeding fish out deeper and we a cast plugs to their positions resulting in three solid bites and two beauty trout landed. 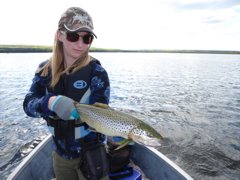 Brown trout are interesting fish, and at another time, on this tiny puddle of a lake I found, one fish that I happened upon decided home was where the beaver run was. It was again early morning and I was quietly making my way round this lake probing the weed edges, blowdowns, and such in shallow with a little nymph looking for trout. Out of the corner of my eye I caught some movement right tight to shore, as in inches away. I slowly dropped anchor, and intently watched the area where the little swirl came from, and I saw it again. I was sure it was a fish, real, real tight to the bank. I cast the small nymph on a long leader to the spot and immediately the line went tight.

I hooked a sizeable brown and it made a hard and sustained run into and up the shore! "What the...!" I said, but it soon became clear the brown trout had raced a long way up a beaver run. If you were to look from the side, you would have seen my line 30 feet up the bank. A strange sight indeed. I kept the pressure on and hoped for the best. To my utter surprise the trout was giving way, and inch by inch I was gaining ground, no pun intended. It took a good 5 minutes but at last I had him back in the lake proper and after a good account, a chunky three plus pound brown lay beside the boat. It was by far, by almost double, the largest fish I caught that day. 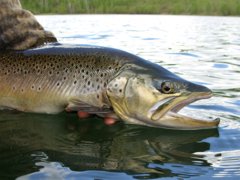 The beaver dam brown also let me in on anther nugget of information. Trout make forays up and down beaver channels to see what’s going on and if there’s food there. This got me thinking. On this one stocked trout lake there was a beaver channel that connected it to a shallow pond that wasn’t stocked. But, and this is a big but, every year shallow cruising trout would wiggle their way into that pond and stay. Given that this pond is never stocked, the fish that did swim through had a veritable food factory all to themselves, and they ate and grew at extraordinary rates. We would sneak our way to this pond come fall and while the fishing was tough, because there just weren’t a lot of fish there, nearly every fish was caught was an extraordinarily large specimen, averaging 4-6 pounds. And I suspect these were young fish, because every winter the fish in this little pond would winterkill and the whole process would start over anew the next spring. It was a scenario that played itself out every year for the 10 or so years my buddy and I fished it. 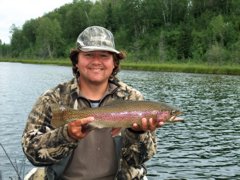 Being observant will put you into more trout.

Being a good angler means being a good observer. Understanding what is going on in front of you and applying this information will improve your results as an angler. So take the time, slow things down, exhibit patience, and really observe what is going on in the water. This approach has helped me piece together where fish are, what they are up to, and sometimes what they ate. Knowing this has helped me refine presentations, which has ultimately led to more fish in the boat.