In the hierarchy of fishes - at least in the polling that Alberta Environment and Parks occasionally conducts among anglers - the Walleye and Rainbow Trout are perennially neck-and-neck for the Fin King title. For good reason. Both are a ton of fun to catch. And if you're into catch-and-keep angling and where populations allow a sustainable harvest they're also delicious to eat. While there have been some pretty heroic efforts by government biologists to revive dwindling Walleye populations in recent years and Alberta's pothole trout stocking program has extended rainbow angling to all regions of the province, there are still many areas where fishing opportunities are sometimes few and far between.

When these beauty contest surveys are taken the lowly Goldeye doesn't rate a blip. Forlorn, forgotten and forsaken in the hearts and minds of anglers and usually relegated to the "other" category of favorite fishes.

Too bad, because the Goldeye and its stable-mate the mooneye, are fantastic game fish and aggressive bug eaters. This extends fly fishing opportunities in flowing waters well beyond the pressured foothills, tailwater trout rivers, northern boreal Arctic grayling creeks, and out onto the parched prairies. While on any given summer weekend you expect to be sharing one of the popular trout streams with a multitude of anglers, competition on Goldeye rivers is all but non-existent. 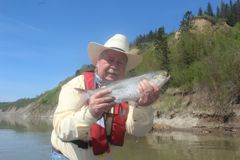 As my angling partner Emmerson and I were to discover when we launched his Explorer jet boat at the Tolman Bridge and ran the Red Deer River upstream on a sunny early August afternoon. Here the Red Deer is a long way from its Rocky Mountain source and flows through classic badlands country. The buttes and hoodoos crowd the water's edge and the scenery is well worth the trip alone. It's where the famous dinosaur hunters of the early 1990s made some of their most spectacular discoveries and the rains falling on the unstable bentonite bluffs are still exposing Jurassic bones today. The eroding banks prove to be the Goldeye anglers best friend and wherever a fresh landslip or sluff hits the water a current break is created. We found active and willing Goldeye rising along the buddle lines that marked the delineation between the fast and slow water. When we figured out what they wanted (in this situation a large black-foam beetle tied with a pink "hot-spot" for visibility) the action on our 5-weight fly rods was pretty well non-stop all afternoon as we worked our way downstream and we were well into double figures by the time we arrived back at the bridge. We observed one other angler all day.

For a brief period of time the Goldeye held superstar status. But not as an angling fish. It was celebrated as "Lake Winnipeg Goldeye" and was an exclusive gourmet breakfast feature in Canadian Pacific Railway dining cars. Brined and smoked similar to Scotch kippers they were the railway's signature dish. Until the big Manitoba lakes bountiful Goldeye population was extirpated about the same time the CPR got out of the passenger train business. Ironically it's the Goldeye's inferior eating qualities when prepared as a fresh fish that have relegated it to third class gamefish status. Which at one time made sense when fishing success was measured by the weight of your creel.

With increased pressure and more anglers going for a diminishing number of fish in many flowing water fisheries, catch and release angling has become the dominant fish conservation strategy employed by government biologists. Even though Goldeye and Mooneye have generous 10-fish daily retention limits on most Alberta rivers. Meanwhile anglers are now targeting fish species that they have no intention of eating like carp. Or salt water gamefish such as bonefish, permit and tarpon. It's the drug of the tug that's more important. 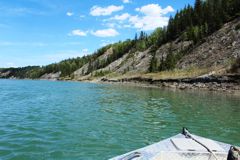 My Goldeye angling experience has mostly been confined to the North Saskatchewan and Red Deer rivers, but thriving populations are found in most of our flatland rivers where the water warms and turbidity rises below the trout zone. While there have been fish biology programs both at the provincial government and the University of Alberta for more than a century, very little is known about Goldeye habits. Some of the literature talks about a mass upriver spawning migration each summer. But I've observed good populations of fish in the Edmonton area both spring and fall. Like I say, there are some gaps in the data. There's also not a lot of size variation. Although mooneye tend to be a little smaller, they're a one-size-fits-all fish.

Still a 14 to 18 inch fish on light fly or spinning tackle usually capable of two or three jumps makes for fine sport. Goldeye get their name from their large yellow-rimmed eyes (Mooneye have "half-moon" irises). The most distinct feature is their silvery, large-scale bodies, resembling old-school, chrome hubcaps. There thick "slab" bodies, especially when held sideways against a moving river current, add to their fishing qualities.

Where to Find Them

Goldeye water, because of its downstream nature, almost always is big water. Large expanses of river that can be bewildering and intimidating to trout anglers more accustomed to intimate trout and grayling streams. Where to start? And how do you manage all that flow? The first thing to get your head around is that while Goldeye may feed like trout and appear like trout, they aren't trout. So while a river rainbow, brown or cutthroat will move out into streamy water called riffles to feed, Goldeye tend to be somewhat on the lazy side and will seek water with a good supply of insect life coming by their front porch. But with a deflection to break the current. 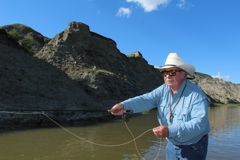 Casting a flyrod for grayling in the Red Deer River badlands

Foam mats and bubble lines are indicators of Goldeye water. So are scours and glides where the fish can hang out in the slow water but have access to a food source concentration. These transitions are called "seams" where anglers should focus their efforts. Of course, if Goldeye are actively rising then it's a no-brainer. Just match the hatch (if there is one), cast your fly along the feeding lane and let the fun begin. Bank anglers may have to hike a few kilometers in an afternoon to find the active backwaters and seams. Having the mobility of a boat - either a drift boat, pontoon boat, rubber raft or a jet increases your ability to cover water exponentially. But a standard propeller-powered still water craft has risk written all over it. Alberta's prairie rivers may appear big but they have numerous gravel bars, submerged rocks and shoals, which are all but invisible in the turbid flow of most Goldeye water. A bent prop on big water is a situation no angler wants to deal with.

The cosmic thing about angling for Goldeye is that it's essentially fly fishing on moving water. So if you can catch trout with a fly rod you're going to have no trouble adapting. It will also expose you to terrain and landforms foreign and divorced from what anglers experience in the Front Range and the boreal - badlands, cottonwood bottoms and prickly pear cactus. While the knock on Goldeye is that they're easy and will strike at anything presented to them when in the feeding mood. As my Red Deer River trip with Emmerson proved, they can be as selective as any spring creek brown trout and at first rejected the hopper patterns and mayflies we presented them with until we determined they were keying on beetles. So matching the hatch, like angling for any bug-eating fish, is gateway to success. The usual dry fly selection that most Alberta trout anglers carry - like Elk Hair Caddis, brown and green Drake mayflies and Stimulators plus hopper, ant and beetle terrestrials - are effective Goldeye patterns.

Goldeye when they're not actively surface feeding will take nymphs under indicators or small Wooly Buggers and streamers swung down and around in the current. Another effective way to angle for goldeye is centerpinning. This technique originated on West Coast steelhead rivers as a means of presenting a drift-free bait to fish which may or may not be holding in a run 50 metres or more long. Goldeye, when they aren't showing, are just as difficult to locate. Anglers can use a standard spincaster rigged with a sensitive float under which a metre or more of tippet is suspended with enough split shot attaches to keep it vertical in the water column.

A bait hook or small jig is threaded with a chunk of nightcrawler. The set-up is released in the seam with the reel bail open and the line is allowed to feed from the spool. Whenever the float bobbles or dips set the hook. A specialized West Coast centerpin system - which features a long supple rod resembling a fly rod, a large free-spooling reel and a light floating braided line - works better at eliminating as much drag and disruption as possible. Allowing the bait to travel a considerable distance down a run before being retrieved. One important difference between Trout and Goldeye is the hardness of a Goldeye's mouth. Requiring forceful and sometimes multiple hook sets to avoid too many frustrating long-distance releases. 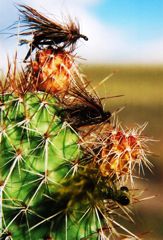 While Goldeye and Mooneye are never going to replace Walleye and Trout as Alberta's most popular gamefish, they present anglers with a chance to catch an alternate specie on light fly tackle. When the light is low on the water, a coyote is howling somewhere up a coulee, the night hawks are swooping and the surface of a prairie river is peppered with Goldeye rises, it clearly is a golden opportunity.